Did The Design For Darth Vader Come From An Old LES Oddities Shop?

Luke, I am your Father Time

While scanning through this 1946 issue of Modern Mechanix, we noticed something that looked incredibly similar to Darth Vader, who wasn't created until much later, and didn't appear on the big screen until 1977. In the issue, it states:

In a little place no larger than a vestibule on Manhattan’s Lower East Side waterfront is one of the oddest clock shops in existence. It’s a veritable museum, crammed to the ceiling with thousands of clocks, many of them over 300 years old and representing practically every nationality in every shape and size. The shop was started in 1892 by Fred Jensen, a young immigrant watchmaker from Denmark. Today, four generations of Fred Jensens (Junior, III, and IV) spend their time putting aged timepieces, into working condition, and dreaming up new and ever more complicated clocks.

This clock was described as a "100 year old oriental warrior clock... the eyes and teeth light up." Interesting, Vader was also a warrior, who also had parts that lit up. Sure, the clock doesn't have a cape (at least not one that's we can see in the photo), but even the "clothing" around the arms looks similar to the Dark Lord's: 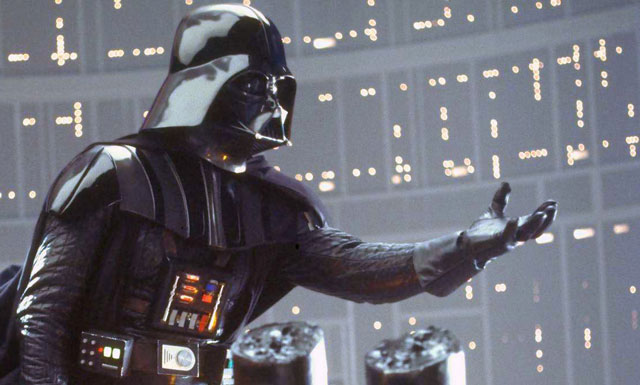 The original Vader design started with a concept by Ralph McQuarrie, and finished by sculptor Brian Muir, neither of whom lived in New York City... but who's to say they didn't visit. Something to think about, at least until we can locate the whereabouts of this clock and unmask it.

At the very least, there was some very early Steampunk action happening on the LES in the '40s.