On Sunday's Mad Men, Betty Francis (formerly Draper) goes to a flophouse near St. Mark's Place in hopes of finding 15-year-old would-be violin prodigy Sandy. Presumably Sandy, a friend of Sally's, is from a well-off family in the suburbs of Rye, and while smoking a late-night cigarette in the Francis kitchen, tells Betty: "All I wanted to do was go to New York. There are people in the Village... I read about it, and I even visited them. I visited this building right off St. Mark's Place, and the kids are just living, and it's beautiful. You know?" 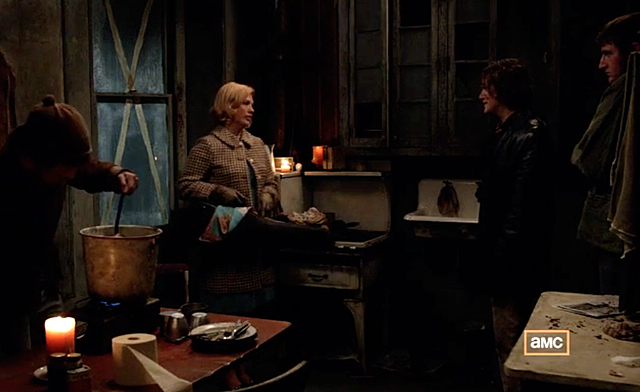 Last night a tipster wrote in and told us, "I've been thinking about the late 1967 'Groovy Murders'... an 18-year-old runaway girl from Greenwich named Linda [Fitzpatrick] and her boyfriend... this incident (which scared the crap out of me in Omaha) is clearly the basis of Betty Draper's concern for Sandy. In 1967 it got set up as the diametric opposition to the Summer of Love, much as Altamont got set up in 1969 opposite Woodstock as the dark underbelly of all that durn hippie love."

The "Groovy Murders" were called that because Linda's boyfriend, James Hutchinson, went by the name "Groovy"—he was an East Village hippie, and Linda a newly converted flower child from Greenwich, CT. The two—immersed in the drug scene—were found bludgeoned to death on October 8th, 1967 at 169 Avenue B (a few blocks from St. Mark's) by two drifters, who came forward two years later but never revealed their motives. 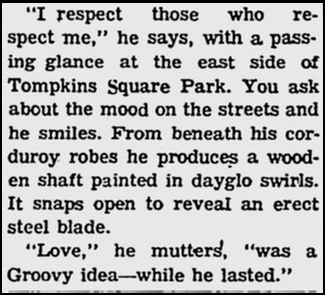 From the 1967 Village Voice article

One fellow transient named Pepsi told the NY Times that following a road trip in early October, Linda "put up with me and my buddy in this pad on Avenue B. She was supposed to keep it clean, but all she ever did all day was sit around. She had this real weird imagination, but she was like talking in smaller and smaller circles. She was supposed to be this great artist, but it wasn't much good. It was just teeny bopper stuff... It sounds like I'm knocking her. I'm not. She was a good kid, if she hadn't been so freaked out on meth. She had a lot of, what do you call it... potential."

On the day of her murder Pepsi saw her "standing in front of the Cave on Avenue A with Groovy. She said she'd taken a grain and a half of speed and was high. Three hours later she and Groovy were dead—their nude bodies stretched out on the boiler room floor, their heads shattered by bricks."

A couple of weeks after the murder, Richard Goldstein wrote in the Village Voice:

"What happened at 169 Avenue B happens all the time. A man and his woman are hauled or lured down to the boiler room where amid rags and ratsmell she is banged senseless, and both are stomped dead. We never hear about them unless the woman was pregnant, mutilated, or both. But Groovy and his girl were slaughtered right on page one of the Daily News. Journalists made pilgrimages to Tompkins Square and its adjoining shrines. Even Mayor Lindsay took note. When he called the murders 'a tragedy' he was speaking not about the crime but its particulars. The tragedy in what went down on Avenue B is who went down, and who did the felling." 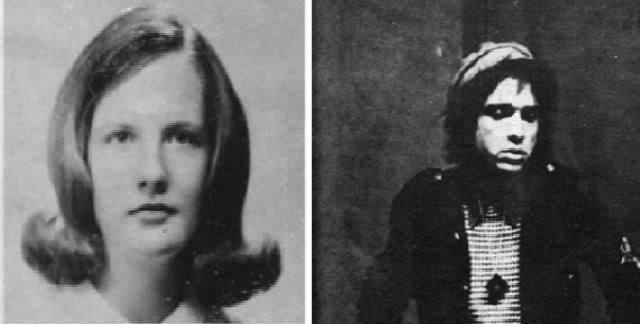 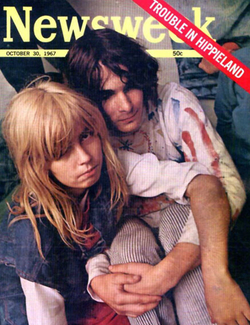 The Daily News wrote that Groovy's "own weird world turned against him." In the immediate aftermath, other publications were searching for their own hippie poster children, perhaps most famously, Newsweek ran a scaremongering cover with the headline: Trouble In Hippieland, and a photo of a couple that could have been Linda and Groovy.

Linda's mother, who lived in a 30-room home in Greenwich, said, "I didn't even know there was an East Village. I've heard of the Lower East Side, but the East Village?" Prior to crashing on Avenue B, Linda had told her "she was going to live at the Village Plaza Hotel, a very nice hotel on Washington Place, near the university," but as the Times noted, “The Village Plaza, 79 Washington Place, has no doorman. A flaking sign by the tiny reception desk announces ‘Television for Rental’ amidst a forest of other signs; ‘No Refunds,’ ‘All, Rents Must be Paid in Advance,’ ‘No Checks Cashed,’ ‘No Outgoing Calls for Transients.’”

Her daughter—who the NY Times referred to as "a young, talented girl overly impatient to taste the joys of life"—had been living there for 10 weeks, but prior to that had been visiting in the summer.