Did Someone Shoot a Dog For Barking Too Much? 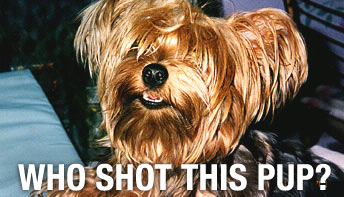 The ASPCA is investigating a strange case in Staten Island: Someone shot a Port Richmond Yorkshire Terrier, who was sitting on the front porch, with an air rifle on Tuesday. The dog died in surgery the next day.

Owners Michael and Marie Buckley told WCBS 2 they moved to Staten Island from Manhattan with Eddie the terrier after Marie's mother died so they could take care of her pets. The Buckleys say that Eddie would bark at passersby, but this past Tuesday Eddie's barking was followed by a yelp when he was shot. A veterinarian found that a single air rifle pellet pierced the dog's diaphragm and liver.

The couple had received an anonymous note a month ago threatening them if their dogs didn't stop barking ("Keep the dogs inside. Your dogs bark too much."), but the Buckleys threw it away. Michael Buckley said, "I didn't think the police would respond to an unsigned note about a dog barking." And you'd think the neighbors would call 311 or the police to complain - or maybe even speak to the Buckleys in person.

The ASPCA's Joseph Pentangelo said, "It's not only animal cruelty, it encompasses a lot of other crimes. Someone in the house could have been hit." And the Buckleys are offering a reward for information. The city's noise code was made official on July 1; fines to owners of barking dogs are now "$75-175 for a first offense if a dog barks for more than 10 minutes during the day or more than 5 minutes at night."