Did Bob Dylan Write A Protest Song About Robert Moses?

If Robert Moses had his way, Bob Dylan may have never come to New York. Moses, the so-called "power broker" who shaped NYC throughout the mid-20th century, tried to completely gut Washington Square Park in the 1930s (he wanted to place a roadway through the park to connect Fifth Avenue with lower Manhattan) when he was commissioner of the Parks Department. He instead inspired a wave of civic activism that flourished into the 1960s, when people like Dylan were moving to the city to be part of the then-vibrant folk scene emerging around the neighborhood.

Dylan and Moses never directly crossed paths—Moses was not exactly a fan of the new music scene in the 1960s, refusing to even book the Beatles at the World’s Fair grounds—but it seems Dylan was roped into the fight against him in 1963, based on the incredible document below, a lyric sheet for "Listen, Robert Moses," credited to Bob Dylan. (The copy of the lyrics comes from the Tuli Kupferberg collection of the Fales Library of NYU, and was found by Tumblr user Belcimer. H/t to Jesse Jarnow as well.) 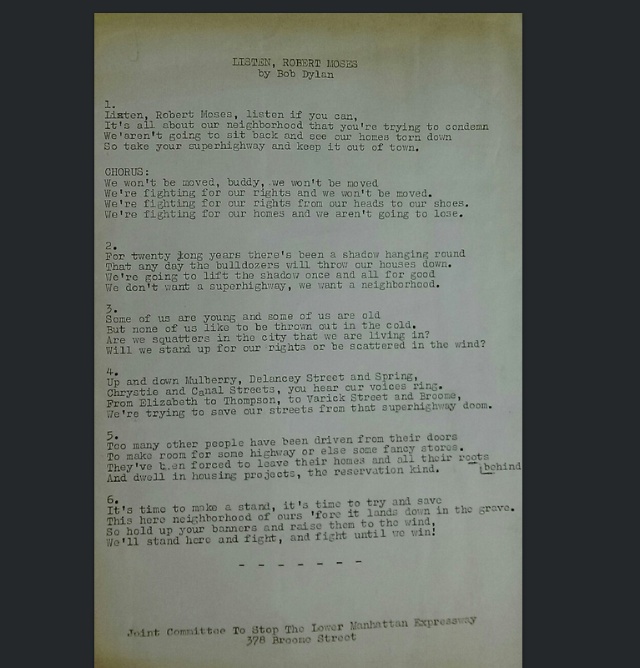 Moses was locked in a battle for the soul of Washington Square Park with Jane Jacobs at that time (you can read extensively about their feud here). Jacobs, who had just written her landmark book The Death and Life Of Great American Cities, formed the Joint Committee to Stop the Lower Manhattan Expressway to prevent the West Village from being bulldozed and redeveloped in order to relieve car congestion.

The Lower Manhattan Expressway (LOMEX) had been kicking around as far back as 1929; by the early 1960s, it had become an "obsession" for Moses, according to author Anthony Flint. “You can draw any kind of picture you like on a clean slate and indulge your every whim in the wilderness in laying out a New Delhi, Canberra or Brasilia,” Moses is quoted as saying, "but when you operate in an overbuilt metropolis, you have to hack your way with a meat ax."

During her struggle with Moses, Jacobs may have approached Dylan to write the song, as was implied in this recent Harvard Graduate School of Design essay on the fight over LOMEX. Or Dylan, who was living amongst the activists fighting Moses at the time, may have been inspired on his own: "Popular singer-songwriter Bob Dylan even crafted a song about the anti-highway movement," Lisa Krissoff Boehm and Steven Hunt Corey wrote in their book, "America's Urban History."

Unfortunately, those are two of the only references to the song available online. Historians I spoke to were incredibly skeptical about the material: "I don't believe this for a second!" said Stephen Petrus, the curator for the "Folk City" exhibit currently showing at the Museum Of The City Of New York. "I've done extensive research and writing on both topics and have never come across this song. Maybe I'm wrong but I believe this is a hoax."

The New York Public Library has no record of any recording of the song as well. But it's entirely possible Dylan wrote the lyrics and never actually sang it—he was writing a hell of a lot of songs during that time period, many of which were getting sent around to other songwriters.

We'll update as we learn more about the song.

#bob dylan
#lower manhattan expressway
#robert moses
#original
Do you know the scoop? Comment below or Send us a Tip