Did Banksy Get His Portrait Drawn In Central Park This Weekend?

Over the weekend Banksy slyly set up a stand amongst the vendors bordering Central Park, charging an older gent with the task of selling his work for just $60 a pop. Only three people purchased items throughout the day, seemingly unaware that they just scooped up works of art worth hundreds of thousands of dollars. Let's just not think about what we all missed out on, and continue in to Day 14 of Banksy's New York City invasion, which features a piece in Queens, and a few other crumbs below...

Photo on right by Humans of New York

1. A tipster alerted us to the latest Humans of New York post, which features a photo of a man in a blue closed-face unitard being drawn by a portrait artist in Central Park over the weekend. Was it Banksy recreating that other time he had his portrait done in NYC? We will probably never know, you guys, but that will never stop us from making wild speculations.

When pressed for more details about the scene, Brandon, who took the photo, told us, "Unfortunately don't have any extra info to add." Sounds exactly like what someone working for Banksy would say.

2. Is tomorrow's piece going to be on the Upper East Side? Earlier today someone saw "a hooded man with a big backpack" and two of his friends jump out the back of the stuffed animal truck and walk up 79th Street—the witness wonders if the hooded man was Banksy scoping out his next wall.

3. While in Williamsburg last night, the waterfall truck got a parking ticket. Womp womp, etc.

Banksy rainforest truck getting a parking ticket at bedford and n7. "It says no standing,"officer said. pic.twitter.com/3X9p5j5Fgq

4. Parents love posing their babies in front of Banksy pieces...

5. And finally, even The New Yorker can't ignore Banksy. 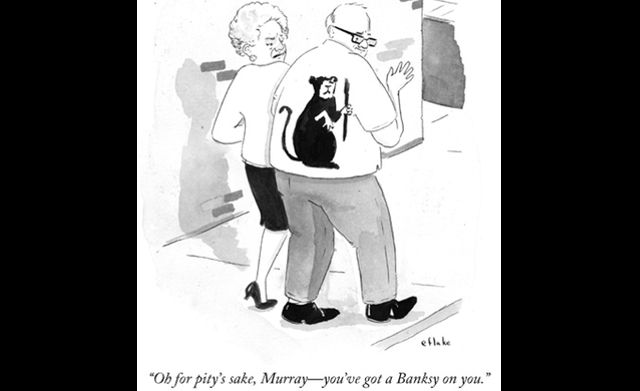 #banksy
#portrait
Do you know the scoop? Comment below or Send us a Tip