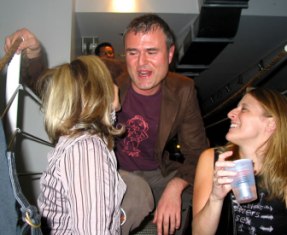 So have the hunters become the hunted? Not really. The article is not so much a take-down as it is a thoughtful analysis of the turbulent waters roiling New Media and Old Media, as seen through the lens darkly of millionaire publisher Nick Denton’s flagship property – loved by some, despised by others, but read by all. In advance of a highbrow think-piece on Gawker in the next n + 1, it seems the anti-Gawker gripers are having their moment.

For those with sense enough to skip reading the whole thing, thereby sparing themselves an unshakable feeling of enervation sure to last through Wednesday, we’ve parsed a few of the low points:

We asked sometime Gawker mascot Andrew Krucoff what he thought of all this: "Vanessa contacted me for the article and I talked to her on the phone for almost an hour, mainly how Gawker has evolved over the past couple of years, something she largely neglects to show in the piece. Our conversation was whittled down to approximately zero quotes. The voice of truth and dissent gets muffled again. But I'm sure I was talking out of my ass."

Disclosure: We were somewhat recently hailed by Gawker as the 1010WINS of the blogosphere. (Also, we’ve slept with just about everyone in the Gawker Media Empire, in exchange for drugs, which we never received.) Let us know what you really think about Gawker and their smarty-pants commenters – rumble anyone? – in the comments. Your AccuWeather forecast and metro traffic report after the jump.