Walking into the new Derrick Adams exhibition is like walking into a home that may be foreign to your eyes but is familiar to your soul; quickly the viewer becomes immersed in the artist's universe. Adams's new work, titled “Interior Life,” is curated by Francesco Bonami and is on display at Luxembourg & Dayan through April 20th.

This series is comprised of life-size vignettes of domestic settings, and the spaces are lavished with Adams's rich mosaic style aesthetic. On custom wallpaper he uses a dynamic range of colors, textures, patterns, shapes, and culturally historical references to build a whole world that features new framed portraits from his ongoing "Deconstruction Worker" series.

"The work is really about the future and the past. Everything that's framed which are the mixed media works are informed by everything around it," Adams told Gothamist on opening night.

Inspired by the Catholic ideology, “a life which seeks God in everything,” the show examines the relationship between the intimate and infinite of two internal spheres, the home and the mind. Luxembourg & Dayan’s gallery is housed in the second smallest townhouse in Manhattan, and serves as the perfect physical space to complement Adams's imaginary domestic domain. 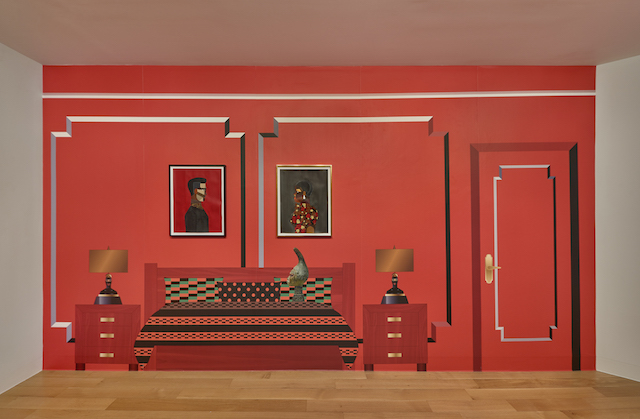 Gallerist Amalia Dayan said, "I love good art and this gallery is a good match for the work because Derrick took into account the intimacy of the space. His work also has a lot of historical references which makes sense for this kind of gallery."

Adams, a native son of Baltimore, is a NYC-based multidisciplinary artist who works in performance, video, painting, illustration, and sculpture. Though he's been a working artist for more than 20 years, it was his 2014 exhibition "LIVE and IN COLOR" that garnered a lot of recognition. The series consisted of wood sculptures and large-scale mixed media collages depicting black archetypes in media, and unanimously entranced viewers. His work became more ubiquitous being featured on the shows Empire and Insecure, helping catapult him to the mainstream in a way reminiscent of Romare Bearden, after his work was featured on The Cosby Show.

Like Bearden, Adams is constantly exploring Blackness through identity, culture, and experiences. His work favors more nuanced and joyful narratives of the black experience, all the while capturing the eye by creating a rich gumbo of colors, textures, and layers that can provoke powerful emotions. And although "Interior Life" is a figment of Adams's imagination, it creates a real space for the celebration of black culture.

Similar to Adams's other works, “Interior Life” is no different in its ability to be visually mesmerizing. The living room with its earth tones is warm and inviting, the bathroom is so chic you wouldn’t want to use it, and the kitchen is embellished with soul food recipes by Edna Lewis and Patti LaBelle. It is the bedroom however that seduces the viewer, lacquered in a Valentine’s Day red paint, featuring two new portraits framed in the center of the room, a nifty lattice design creating the bedspread and pillows, and a bust of a black woman serves as the base of 2 bedside lamps, makes this room totally captivating.

"Interior Life" adds another important layer in Adams's body of work; he wrote of the show, "I am always trying to make these references to things I see things, things I’m attracted to, why do I like them? Where they come from? I think about all those things when I’m making my work but I think this is the first exhibition where I had the ability to really expand on it in a really almost performative way. I think the viewers will have some type of visceral response to it that is more about familiarity than about the histories that have informed me to make this."