In the barroom outside the shotgun performance hall at Pete's Candy Store, a woman's singing threatened to drown out a free lecture on artisanal pencil sharpening. "They're making an acetate record out there, people," the speaker David Rees told the crowd. "Just so you know: you are in Williamsburg." Rees would soon don a black smock and explain how he will lovingly and with great care, sharpen your #2 pencil for $15.

That $15 ($2.50 more than he used to charge) buys you "a pencil so sharp you don't want to sleep in the same room with it," a labeled bag of the shavings that fell from the pencil, a plastic tube that protects the pencil's tip from breaking in transit, and a certificate of sharpening, which gives you a sharpness rating and details like whether the pencil was sharpened in natural or artificial light. According to Rees, each pencil takes about 20 minutes to complete. By our estimate, he has made around $10,000 from his pencil sharpening business.

What makes Rees's efforts different from Brooklyn's distressed clothing and $20 egg creams is that he is at once sincere about his craft but not delusional enough to miss its absurdity. He wears a smock because "it conveys Old World, hardscrabble authority. You see a man in a black smock and you follow that man." His book, How To Sharpen Pencils, contains painstaking, step-by-step instructions, including the warning to forgo a final third turn of the pencil as it nears completion, "known as 'The Devil's Dance,' " lest your pencil become sharp enough to break upon use. 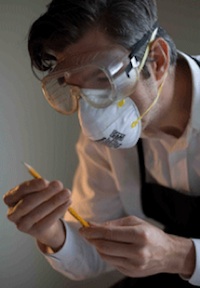 The book also features chapters on celebrity impersonation pencil sharpening ("Al Pacino, the I Love Lucy lady"), behind-the-back sharpening (inspired by Jimi Hendrix), and sharpening a pencil with your mind. Rees also refuses to sharpen any pencil that is not a #2, and doesn't even use pencils himself: "That would compromise my objectivity."

But the man knows an awful lot about pencils: he can recount their history, the manufacturing process, his favorite brands. He lovingly speaks of the Palomino Blackwing, achieving the perfect "collar" of a pencil (a term he invented) and Shelbyville, Tennessee, or "The Pencil City," home of the last major U.S. pencil manufacturer.

Rees wasn't always sharpening pencils: for eight years he was the author of Get Your War On, a popular political cartoon that skewered the Bush Administration's reaction to 9/11. When Bush left office, Rees quit writing, and found himself broke and working for the census. It was there he realized, with a government-issued pencil sharpener, that his pencils were the sharpest. 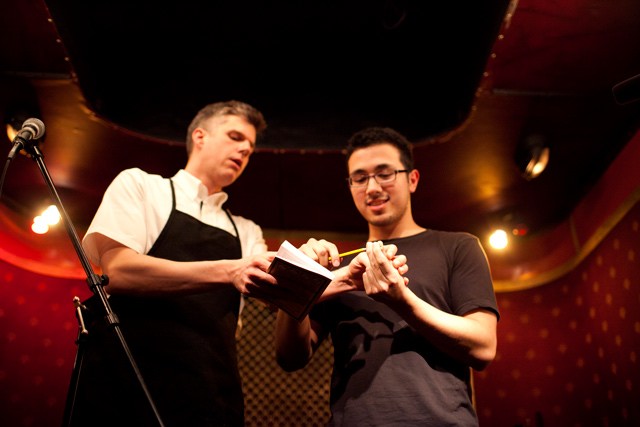 Who are his clients? "I don't divulge my client list," Rees deadpans, "Some people enjoy it as a conversation piece, and I've had some contractors compliment me on how great the pencils are. But other people are just really inspired by a perfectly sharpened pencil—it's a wholesome, apolitical symbol for good, honest work."

"People are going to assume one of two things: I am douchebag hipster or a hardcore, Libertarian capitalist," Rees muses. "But this was always going to be a real business." A real business that has a rep from the company who makes Palomino Blackwings discussing a possible sponsorship deal, and a charity that builds schools for children in Africa, Pencils of Promise, asking him for help as well.

Rees says he likes to think of "Not a Red America or Blue America, but a Yellow America," one he will tour for his book. "It's being pegged as a humor book, and I'm really grateful that it's getting published. But it's way more like an emotional memoir in the guise of a pencil sharpening book." Rees says wrote the book as his marriage was unwinding. "There's a real sort of self-help subtext throughout it, and originally I had written this forward about my state of mind when I was writing it, where I was coming from, but we didn't need it. All of that comes out in the book anyway." John Hodgman pens the introduction instead.

David Rees's book, How To Sharpen Pencils (Melville House) will be released on April 10. He will appear with Amy Sedaris at the Union Square Barnes & Noble. The book is priced at $20, or $5 more than it costs to sharpen a pencil.