Deck the Halls with a Real Rockwell 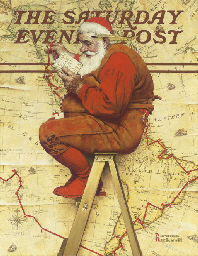 'Tis the season...not only for typical holiday shopping, but for auctions as well (the auction season kicked off earlier this month when a Matisse sold for over $33M). So what's the ultimate gift this year? If you missed out on the $18.5M Faberge egg, how about the Norman Rockwell painting of Santa Claus?

The painting, titled Extra Good Boys and Girls, is expected to take in between $2.5 and $3.5 million, according to Christie's New York, who told the NY Post, "This is our high-end Christmas present for this season."

The oil-on-canvas piece, used for a December 1939 Saturday Evening Post magazine cover, is part of an auction featuring more than 215 lots of American works of art.

Christie's believes that it has gathered the most valuable selection of American art for one auction and estimates that the final tally could hit more than $60 million.

The auction, Important American Paintings, Drawings and Sculpture, is tomorrow at Christie's...but you would have to know someone who's been really good this year to drop that sort of change.