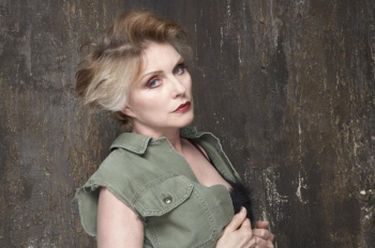 Debbie Harry's internationally known as the smart, cool and sexy front woman for pop/punk sensation Blondie, but when it comes to her solo career she prefers to be thought of as Deborah. The slight but significant name change might imply a conservative shift in tone, but her latest album - the first in fourteen years - finds her as vibrant and upbeat as ever. (Website, myspace) There's something inspiring about seeing Harry, whose storied career extends back past Max's Kansas City, CBGB and Studio 54, still in town and and creatively charged. She heads out on tour today, starting with a show tonight at Irving Plaza.

Why did you name your new album Necessary Evil? I took it from the title of the song and I thought it was sort of interesting, fun, and provocative.

According to the Times the song is an homage to Jimi Hendrix. How so? It’s sort of in his style; it’s a sort of talking blues sort of thing with a few guitar licks.

What motivated you to do a solo album as opposed to a Blondie album? Well, I met these nice people I enjoyed working with and started doing some demos. The project grew over a year and half, really. Every time I would come off the road, if I had an idea, I would add it on. And it ended up turning into a really nice project.

After a certain point does it get harder to find new things to say musically? Not any more than ever before. Although I will say that while it often seems there’s practically new under the sun, somebody always comes along and you sort of say, “Hey! Wow! That’s really great, I love that!” So there’s always something new somebody does. I wasn’t really trying to break that much ground with this record, I was just really having fun and trying to write some good songs.

What can you tell us about your Broadway debut alongside Andy Kaufman in Teaneck Tanzi: The Venus Flytrap? [Laughs.] Well, it was a very interesting little musical play. At the time, way back in the beginning of the ‘80s, Chris [Stein, co-founder of Blondie] and I were very big wrestling fans and we used to go to the Garden all the time because we had a friend who did all the promotion there and she would get us ringside seats. We had a great time and started going to wrestling many, many years before Cindi [Lauper] starting hanging out with Lou Albano. So then all of a sudden I got this script and I thought it could be really fun. So we did the show for about three weeks in previews, downtown in a nice sort of loft space Off Off-Broadway. And it was great; the audiences were loud and everybody was shouting at the wrestlers just like a real wrestling match. And then they decided they were going to open it on Broadway and it opened and closed almost instantly! So I guess it was a little bit premature for Broadway.

What are your memories of Andy Kaufman? I just remember Andy being very quiet in those days. He had gotten into macrobiotics. In our rehearsal space there was a section in another room where we would all go eat lunch on these bleachers. And he would take out his macrobiotic food and eat it very quietly, in a very focused manner. I think he was aware that he had cancer at that time, so he was actually on the quiet side.

How do you feel about CBGB being turned into an upscale boutique? [Laughs.] It’s just a building. It’s just a storefront, really, when you get right down to it.

Do you feel though that it’s indicative of broader changes in New York City? Yes, in some ways, but you know when you look at New York City it’s a fast moving, crowded place with layers upon layers of history, with these different buildings and venues that are always changing. You know, I go past the corner of St. Mark’s Place and Third Avenue and that used to be The Five Spot, which was an incredible, very famous jazz club. Max’s Kansas City is now a deli. I mean, this is not the first time I’ve seen this happen. It happens all the time in New York.

What’s your favorite place to hear live music in New York these days? There are a lot places I like, it just depends on who’s playing. I go to the Knitting Factory sometimes; that’s always a good place to go. It’s a comfortable, very intimate size and a fun place to go.

Have you been approached to license any of your songs for advertising? I don’t do the licensing on Blondie material.

Do you have any upcoming movie roles? I do; I have part in an upcoming movie called Elegy. It’s a very small part. Sir Ben Kingsley and Dennis Hopper are in it; I play Dennis’s wife. Penelope Cruz stars in it as well.

What's the most memorable fan interaction you've had so far? Isn’t that rather personal [Laughs.] Or don’t you mean it like that?

I just assume you get stopped on the street a lot by people who recognize you. One of the most memorable interactions has been with a woman from Greenland who is part Eskimo. That’s the most remote fan I’ve encountered. She sent me a letter and some little cuffs that she had knit. It was very sweet, so I wrote back to her and we communicated a couple of times. I can’t imagine what it’s like to live in such a place.

What neighborhood in New York do you live in? The Chelsea area.

If you could change one thing about New York what would it be? Some of the new buildings I would definitely tear down.

Do you like the newish Frank Gehry building on the west side? Yes, I do. New York should have lots of special buildings like that, not just one or two.

What did you think of the new movie version of Hairspray? I haven’t seen it. Have you?

No. What about the Broadway show? I did see that, yes.

Did you like it? Well, yeah. I don’t think musical theater is my favorite sport but I thought they did a really good job and it got the point across. The audience really seemed to love it and the music was good.

But it was no Teaneck Tanzi. Well, it’s certainly been running longer, hasn’t it?