Death By Audio, the best music venue still standing in the condo-clogged heart of Williamsburg, is closing in November.

According to a statement released by DBA's owners & bookers, Edan Wilbur and Matt Conboy, the venue on South 2nd Street near Kent Avenue will shut down on Saturday, November 22nd, a little more than seven years after it opened.

We have been fortunate enough to host bands from all over the US and the world nearly every night of the week. Amazingly, we’ve hosted in excess of 1000 acts a year for the past seven years.

All ages DIY music venues are almost by definition temporary, and we feel fortunate to have lasted in this space for this long. We knew from the beginning that it couldn’t last forever and we are extremely grateful to everyone who has preformed or attended any of our shows. We are still weighing options about what happens next and will let everyone know more about the future of Death By Audio as soon as we can.

The release doesn't explain why DBA is closing—in July, when Vice bought the neighboring space at 285 Kent so they could hire 400 more employees in their quest to become the next CNN, Wilbur said that DBA wasn't going anywhere, but noted, “We’ll see how that goes when our lease is up.”

In an email, Wilbur and Conboy declined to provide more context for the closure.

There's no need to treat this news like the Kennedy assassination just yet: Wilbur vows to provide "a joyous occasion" for the venue's final days (including a Shannon & The Clams / Liquor Store bill on Thursday, a JEFF The Brotherhood / Diarrhea Planet show in October, and a slew of other shows that are likely to be packed). You can read his more detailed personal statement below. 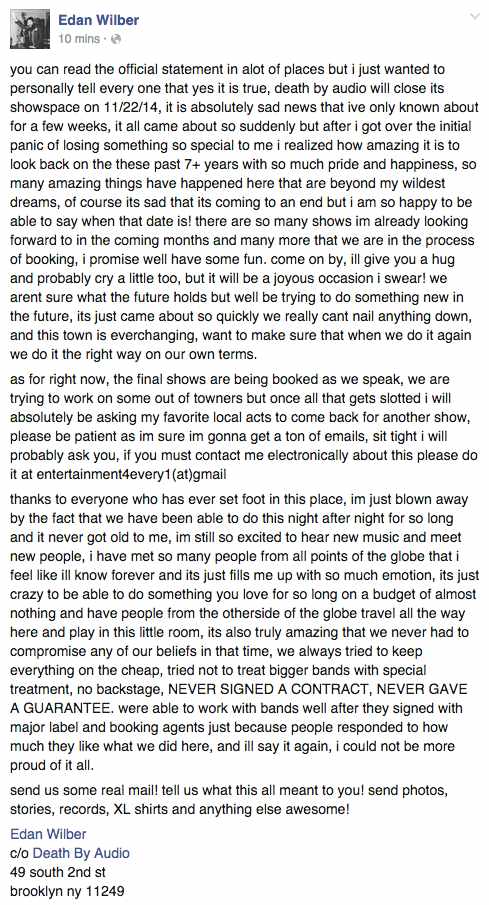 #285 kent
#dba
#death by audio
#williamsburg
#Williamsburg needed a Pret A Manger anyway
Do you know the scoop? Comment below or Send us a Tip