David Lynch To David Letterman In 1991: 'People Who Like Twin Peaks Are Party People'

Twin Peaks is back with more garmonbozia and unexpected tie-ins than Nadine Hurley could imagine. But once upon a time, the show's visionary creator, David Lynch, appeared on talk shows, begging for people to watch it—and for ABC to change its time slot so people could even tune in.

In a February 27, 1991 interview with David Letterman, Lynch appeared on a rival network (it was The Late Show with David Letterman on NBC) to take his case to the public. At this point, Twin Peaks had been shuttled around a few time slots: It premiered on a Sunday night, then moved to Thursday nights until the first season finale, which was on a Wednesday night. Then, the second season premiered on a Sunday, but then the show aired on Saturday nights.

On the show, Lynch said, "Those popularity polls, we've been decreasing in them steadily. There may be lots of reasons, but it doesn't make any difference. Now we're sort of in trouble. We think that we have a good show and we can do well on a weeknight because we feel very strongly that people who like Twin Peaks are party people... They are not home on Saturday night. They don't want to be home on Saturday night. To have the show on then would be wrong."

"You know, the truth of it is if you stop and think about it seems like it might be the kind of show that would be...you know, kind of have a limited run. And then would become a classic forever," Letterman pointed out.

"That's okay, too. If it has to end, you know, that's alright but if it doesn't have to end that's even better," Lynch said. Then he he asked fans to write to then-ABC President Bob Iger and asked to give Iger's NYC office address. Letterman happily agreed, "I love annoying these network weasels."

[Disclosure: I actually wrote a letter to Bob Iger after reading this. I also turned my freshman year of high school locker into a Twin Peaks shrine and begged my family to visit Seattle and then take a road trip to Snoqualmie Falls. ]

It's possible that Twin Peaks: The Return is as narrow a cult hit as the original, given the low ratings (but really, who cares). So let's just enjoy trying to decipher the puzzles and apparitions (seriously, what was the creepy thing in the jail cell a few down from Hastings?). Also, when Lynch met Elisabeth Moss and Jon Hamm at the Cologne Film Festival in 2010, he kept calling them "Peggy" and "Don':

We would all watch a Lynch-written-and-directed episode of Mad Men, right? 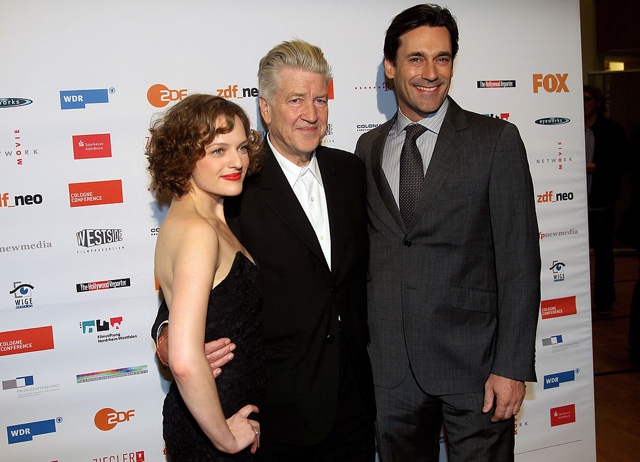