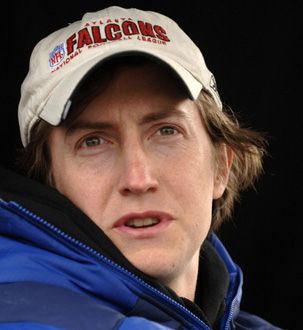 Director David Gordon Green, called "one of the most interesting and idiosyncratic independent filmmakers of the last decade" by The Believer, will be sharing his lyrical take on southern culture with Brooklyn moviegoers starting Thursday, when BAMcinematek kicks off All the Real Americans: The World of David Gordon Green.

What's interesting about the week-long, early-career retrospective is that Green has paired each of his four feature films with six movies from the '70s and '80s (ranging from Tango & Cash to Night of the Hunter) that served as inspiration. The series culminates with a sneak preview of Pineapple Express, the stoner buddy comedy starring Seth Rogen and James Franco that premieres August 8th. Green will be on hand to introduce some of the screenings and answer questions afterward; peruse the full schedule here.

You chose the films in the BAM series, right? Yeah, the lady over there said I should pick a couple movies that I’ve been influenced by. So I picked a few that seemed to make sense.

Was it hard to whittle it down to just six films? You know what, I picked movies that I hadn’t seen in the theater for the most part. Films like Picnic at Hanging Rock. So a lot of it was just kind of self-indulgent on my part. Like The Gravy Train, which I’ve never seen with an audience. And I can’t imagine how much different this movie will be when watched with a crowd; it’s amazing. The funniest movie I’ve ever seen. Terrence Malick did it before he made Badlands; it’s just got some of the funniest writing and the greatest buddy comedy chemistry I’ve ever seen.

Which one did that influence? The one I have coming out in August, Pineapple Express. It kind of has a lot of the same vibe to it. Also, Tango and Cash, which is another buddy movie I enjoyed from the ‘80s. Both of those influenced Pineapple Express.

Pineapple Express looks pretty hilarious. Did you have any trepidation about directing a big budget comedy like this? No, I was pumped. And I worked with a lot of the same people I’ve always worked with; same cinematographer and sound guy. Probably 15 people on the crew were on my very first movie. It was a very organic transition and it was also a very similar style in terms of directing; just a different genre. I mean, you do exercise different muscles when you do car chases and blow stuff up, which I hadn’t done before. But I’ve seen enough movies that kind of talked that language.

How did you come to be involved in it? I was hanging out on the set of Knocked Up and started talking to Judd Apatow and Seth Rogen and we just had a very similar style with what we were trying to do; a very collaborative, improvisational type of execution. A couple weeks later a script showed up.

Your first three movies were focused on the south. Was it your intention to focus on that region or was that just where you happened to be? It’s where a lot of the resources were that I knew about, and I was comfortable there. So it made sense to work there economically. It was also a region that I think was kind of starving in terms of Hollywood depiction and characterization of the region, which has been a little bit silly in my opinion. It seemed like there were unexplored aspects of the region that could be fresh for American audiences and also good for international audiences who assume all of America is like Sunset Boulevard.

What film at the BAM series dovetails with your movie Undertow?
Night of the Hunter greatly inspired Undertow; it’s very much a fairytale journey. I’d also say Adventures of Huckleberry Finn was an influence. That has a sort of similar grand vision of youth through young eyes rather through something more sentimental or nostalgic, which a lot of movies present.

And what films did you choose to present in connection with George Washington? Bless the Beasts and Children, which is a movie I think is very overlooked and has such a wonderful blend of nature and landscape and kids and their connection to animals. It’s a film that doesn’t condescend to youth, which is something I’m always an advocate of. And that’s a movie that’s hard to find even on VHS anywhere; I’ve only seen that on TV. So I’m excited to see that uninterrupted.

I was reading that you’re going to be starting a company to distribute action movies on DVD? Well, I wish I was that ambitious; I have the idea to that but there’s no reality to that dream yet, unless someone gives me the money. But I am kind of developing a few potential franchises of low budget things to make as a producer and I’m really excited about what the direct-to-DVD action movie market could be. The possibilities for what it is and the doors it could open for talent and new voices and interesting subject matter are exciting. I think the industry is tricking video store buyers into picking a title that has a name attached but it’s a piece of crap. Instead it could be an exciting introduction to an audience for new voices making low-budget, innovative films. It’s a great platform for new talent.

Was there a particular film that made you want to be a director? Yeah, I would say Never Cry Wolf and Stand By Me were two movies that made films seem real to me. All of a sudden it wasn’t science fiction or escapist entertainment necessarily; they were taking place on Earth. I remember them having a huge effect on me at a young age. I was probably in like third grade when Never Cry Wolf came out and I know I was six when Stand By Me came out. And it occurred to me then that this is something people actually do and I wanted to watch those movies over and over again to dissect the process.

Everybody has a different opinion about whether to go to film school or whether to just strike out on your own and start working. You seem to have found North Carolina School of the Arts to be the right place for you. I don’t think it’s as much about the institution as the classmates and the people you’re surrounded by. When I was at NCSA the class above us and the class below us were very cool, eccentric and diverse. They wanted to work hard and learn as much as they could. It was a small school, the film department was very new, and the people there didn’t have many connections in the industry. And if you look at the graduates from those classes it’s pretty impressive what they’ve gone on to do. We stood by each other and were a really connected band of filmmakers.

What are you up to now? I am writing a few projects and laying low. Seeing how Pineapple Express does when it opens in August. As a writer it’s a really great way for me to explore other genres. So I’m writing a horror movie and a big action movie and a pretty ridiculous comedy and also developing and an animated TV series. So, stuff to keep every day fresh.

Is one of those things the remake of Suspiria? Yeah, have you seen Suspiria?

I hadn’t even heard of it until I was reading up for this interview. It’s pretty sweet. I just finished a second draft of the script. I’m writing it with my sound designer; another guy I went to school with. I thought it would be interesting to approach this technically rather than the stream of consciousness way I usually write.

And the original is some kind of gory horror movie? In one sense, yes. It’s also the last technicolor film ever made; it’s just a beautiful, vibrant, extraordinarily ambitious, very stylized movie about a coven of witches that run a ballet school. So to me the invitation for it all is that it embraces dance and cinematography and music and sound design and performance in a way that no other genre could and the current wave of horror films are totally neglecting. Dario Argento, who made the original, has really been an extraordinary influence on horror film makers. But the idea is to reach to the brilliant sophistication of his style rather than some of the campy, more cult-appealing side.