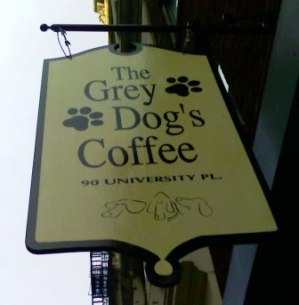 The Grey Dog's Coffee has been open in its Carmine Street location since 1996, and has been a neighborhood favorite for years. David Ethan, who co-owns The Grey Dog with his brother, Peter Adrian, recently opened a second location on University Place. We caught up with David over a cup of coffee (naturally).

So, tell us about the birth of the newest Grey Dog.
Life got too expensive, to be honest. I had a full staff. They started out as kids. Now they’re getting married, they’re having families, they needed more money, and the first Grey Dog only generates so much, so really, we had to expand.

Did you have a specific neighborhood in mind when you decided to open a second location?
That’s a long story. We didn’t have a specific neighborhood in mind. We found a place in Soho that we liked and we went to sign the contract, but we couldn’t come to an agreement at the table. Then I spent five months trying to move into the Liquor Store Bar in Tribeca. I was holding the lease, but couldn’t sign it because I was trying to get community board approval. I went through about two or three months of community board stuff, and we actually won approval, but in that time, I grew to not like Tribeca. I spent so much time trying to get the right to open down there and then I realized that I didn’t want to be in Tribeca. I didn’t like the neighbors, too much hassle, so at the last minute I pulled out.

The same day, a friend of mine saw that I was bummed out because I worked so hard and the deal fell through so he asked where I wanted to be. I said, ideally, the greatest place on earth would be University Place. He said that he just happened to walk by a vacancy there today and he had written down the number for some reason. So, I called the number, and basically, the deal was struck over one week, from Christmas to New Year's. January first we signed.

Do you feel so far that there are any differences between the two locations?
We had a wonderful surprise with the amount of strollers that came in here our first Saturday morning. It was like this little circus, and it was great. I think it’s because there’s just a little bit more space here, which gives it a nice flow and parents feel comfortable. Being a parent myself, it’s really encouraging to see that we’ve got a place where you can bring your kids.

What do you think it is about Grey Dog that makes people keep coming back and makes it such an integral part of the neighborhood?
I think maybe it’s three things that are all related. Everybody seems to be able to hone in on something that reminds them of their childhood or their college years – it reminds me of a place in Wisconsin, it reminds me of a place in Utah – everybody seems to have a place, so it’s not just isolated to one part of the world. It reminds me personally of Cape Cod, but that’s just me. It reminds my brother of Ann Arbor. We seem to remind everybody of some comfortable spot in their lives. Maybe that’s why they come back.

From a historic perspective, I like to think that it’s one of the few truly bohemian places left in New York City, just based on the way we run it, like a commune. The management system here is that everybody manages. In order to work here you have two tries to show you can manage the place and if you can’t, you’re fired. Everybody manages about one shift a week and everybody’s equal. People work hard for each other. I don’t want to let you down because tomorrow it will be me. And I think they enjoy the responsibility of running a New York City restaurant. They get to pick the music, set the vibe, the lighting, everything. And they’re all pretty laid back, so it’s got a bohemian nature. I guess that comes a little from my brother and myself. We know the food’s great, but I’ll look at a customer and say, “Chill out, it’s just food. Sorry you have to wait an extra five minutes.” Also, you have the fact that you have to help yourself to everything, so it kind of keeps the pain in the ass customers out. They come in once and they realize, “you’re not going to get me a spoon, you’re not going to wipe my ass for me? I’m never coming back.” And I’m like, “later.” And then the third thing is that I want it to be like a Rockwell painting, that’s the whole thing.

To me it’s comfort, very traditional, the word “quaint” comes to mind, and it kind of brings a smile to your face.
I describe it as a less complicated American café. We have a manual dumbwaiter to bring up the food. We don’t use computers. In order to get the food into the kitchen we have a hole in the floor that we lower it into. We call out people’s names. when their food is ready. We’re not high tech. The food’s real simple but it tastes like mom just baked your bread; you’ve got the smell of bacon and coffee. It’s a simple, small town Americana.

What’s your idea of a perfect day of recreation in New York?
Getting up in the morning with my wife, my two kids and my dog, walk to our local coffee shop in Park Slope. From there, going to the playground, then having the kids take a really, really long nap while I have a glass of wine or a beer with my wife on the stoop. And then maybe going for a family bike ride, and finishing the evening at Brooklyn Fish Camp – one of our two favorite restaurants. Getting everyone to bed early and then going to bed at nine o’ clock ourselves.

Have you had a favorite New York celebrity sighting?
We get a bunch of celebrities, but I think my favorite thing is when nobody pays attention to them. They feel like they have a moment to themselves. It’s always the same where they only feel great remorse when they’re bothered. I know my staff will always leave them alone and mostly the customers are just so cool that they know to leave them alone. We have a lot of people but my favorite is when they’re not bothered.

Even if you’re not bothering them, is there someone you’ve seen that you’re secretly so excited you’ve gotten to see in person?
No, I’m still waiting for Willie Nelson to come through the doors, but he’s about the only person I’ll truly ever be excited to see. So if you have a way to get Willie in here, let me know.