by John Del Signore
Thornton Wilder's groundbreaking 1938 play Our Town has been almost irreparably scarred by unbearably earnest high school drama club productions over the years. So it came as a bit of a surprise that Chicago director David Cromer—who won an OBIE for his rather sensational adaptation of The Adding Machine last season—would be reviving this old relic here in New York. But since opening Off Broadway all the way back in March, the production, night after night, has been eradicating any misconceptions that Our Town is just a hokey, Norman Rockwell Hallmark card to small town America.

Cromer, who also performs in the play as the Stage Manager, brings a dry, unsentimental approach to the role, which infuses the entire production with an understated elegance. Performed in the round with the actors often inches away, the effect is one of striking immediacy and refreshing wit. It remains one of theatrical highlights of the year, and, happily, the production's been extended once again.

Although it was first produced in 1938, your production feels so immediate and real. It didn't seem antiquated in any way, and the characters seemed like real contemporaries of mine. Thanks! Yeah, I think that's ideally always my goal, even if there's old-timey language that—it feels like I'm saying, "Yes, yes, I know, and here's why." Sorry, I didn't mean to sound pompous. You know, I can't remember who said it to me or maybe I just constructed it, but it's just got to seem like it's really happening. I gave an interview once where the guy asked, "What do you try to do?" I said, "Oh, I just try to make it seem like it's really happening right then." And the person just sort of turned and said, "Well, that's what everybody does." So I said, "Okay... You know, you just asked me what I did!" But yeah, that's the idea—make it seem like it's really happening.

How did you decide to direct Our Town? I decided to accept the job, but it was not a play that I had designs on or a grand vision for or a hunger for. I love Our Town, and I had two other times in my life as an actor been about to play the stage manager in a couple of other people's productions, different directions. And then the deal fell through or I wasn't able to or the schedule changed and the show didn't go up. And so I was meeting with the artistic director of The Hypocrites, which is the company that produced this production in Chicago—what is now the New York production.

Sean Graney is the artistic director and he asked me to do a play for them and we met a bunch of times and kicked plays around. I wanted to do Summer and Smoke and he wanted to do Our Town and I went into the last meeting pretty certain that I was going to get my way because I'm Johnny Big Pants. And so I said, "I think we should do Summer and Smoke," and he said, "Well, we're doing Our Town, so if you want to do it, fine." So I said, "Okay, but I get to play the stage manager." It was sort of out of my mouth before I thought about it. And he said, "Great!" Any other artistic director in the world would have said, "Um, you know what? That's probably not a great idea. You know, I just think your focus is going to be all over the place. I think it might be really good if you just focus. We have an ensemble of actors; you're taking the good part." But he didn't, so that was it. I agreed to do it to do it because I know it was a good play, and I didn't have much of a plan for it. 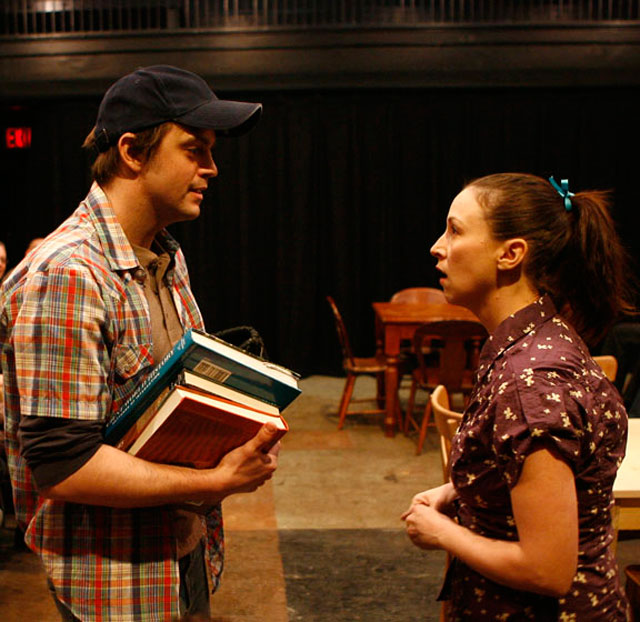 James McMenamin as George and Jennifer Grace as Emily in David Cromer’s staging of Thornton Wilder’s Our Town. (Carol Rosegg)

Have you done that before? Performed in something that you were directing? Yes, I've done it twice. I did it many years ago in the production of Dancing at Lughnasa, where I played the narrator. And I did it 10 years ago, pretty large scale, in a production of Angels in America that I directed.

And how was it this time? Did you find it especially challenging in Our Town? Not so much, because the stage manager's scenes are all very separated. It's basically chunks of narration, at the beginning and middle of each half, roughly, and these sort of exchanges that you do. The reason it was relatively easy—it was difficult for me to learn lines since I'm 44 years old and don't act that often—but it was relatively easy to act the part because the conceit has been that it's Wilder trying to remove basic, accepted, common pieces of theatrical artifice by getting rid of the scenery and by having a character who occasionally says, "We're gonna skip this," or, "We're gonna skip ahead," or, "Oh, let me show you this. We're going to be very casual about the reality of the show." 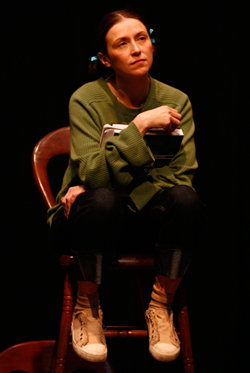 Jennifer Grace as Emily in David Cromer’s staging of Thornton Wilder’s Our Town. (Carol Rosegg)
Can you talk about the naturalistic set element in Act 3 and how that came about? I'd rather not—the press office and the producers still want to avoid ruining that surprise. But sure, what the hell. Yes, without being too literal about it because I don't want to tell people what it is. I guess because we were doing a flashback, to do something frankly supernatural, like that, in a play that is obviously not naturalistic but is about natural behavior, normal behavior, even though it is not normal in its conceit—it's sort of surprisingly avant garde, that play. It's not usually treated that way, but it's got flashbacks, a narrator, it breaks the fourth wall, and it shifts time. It's so strange. I guess at one point I just said, "I think the flashbacks ought to be something special. I think when she goes back, it wants a little something else."

It's a real change in the rules of the play up to this point; a huge change. There are a bunch of rules set up for the play and they're kind of strange, but they're there. And then Act Three just completely rewrites everything. We're dead now, we're in the graveyard, we're going to explain what happened after you die—that's huge, you know. So all the rules change. So in Chicago we were able to do something a little bit farther we weren't quite able to do here for budgetary reasons, but in Act Three in Chicago there were like 20 more dead people that you'd never seen before just blanketing the stage. The idea was that you can't just have the people you've seen all night dead. You have to say there are more dead people than there are live people. And I guess that's probably not true anymore.

So we were thinking about how the rules change in Act Three and what other things there were and I just said one day at a meeting, "What if you were in your kitchen when you were 12?" And we just talked about the linoleum and how the counters are much higher because you were littler and I thought about the light coming through the window on a winter morning. And in Chicago when I was a kid it would get so cold the panes of glass would ring. It would sort of hum in relationship to the heat from inside and the cold from outside. You'd hear this tone. And we talked about if you were playing outside how you'd warm your feet on the side of the refrigerator. People talked about what breakfast smelled like and people talked about how miserable you were in the morning in the cold because you had to go to school and it was still half-dark outside. We talked about those things and we started to think, "Wouldn't it be interesting if we could see that?"

Having performed for so long in New York now, you must start to get recognized now. Have you had any interesting interactions with audience members after the performance or maybe someone who has seen it and spotted you in public? Because I found the play really emotionally resonant. Yes! It's strange—there's not really a way out of the theater that doesn't cut through the lobby. People stay. Like, a lot of people. And not just people you know. It's very moving. People take this play very, very personally, and that's its design, for God's sake. People cry quite a bit when they talk to you about it. A lot of people wait and stay and they say nice things. I met a woman who was from—I don't remember where she was from, I want to say Yugoslavia—and she saw the play for the first time in 1942 in Yugoslavia and she was here for her 80th birthday. Her son brought her here for her 80th birthday, and we were pretty moved by that. I definitely have gotten stopped on the street a couple of times by people who saw it. I guess the interesting thing about it is they seem legitimately moved and that makes me feel responsible to not blow it during the show.

What you do to keep it fresh and stay inspired? Well, I missed five performances in Chicago and I missed six weeks of performances here. I left for a chunk of time and just came back three weeks ago. I have not done it as many times as Jennifer Grace, who is Emily, and has done every single performance. She's over 200 performances. And we just have to once in a while remind each other, "I think you're jumping to the result there—it looks like you know what's going to happen right here," and the person will say, "Oh yeah, yeah, you're right." That just reminds you to forget what's happening next. Every now and then you have to remind yourself to forget what happens next. And even though it looks like the stage manager knows everything that happens next, there are these great moments in the script where he starts one scene and a different scene begins. In this speech I have in the middle of Act One where he starts talking about the early afternoon calm in our town and then Mr. Webb's cutting his lawn and it seems like I'm going to say something about cutting the lawn or I'm going to say something about Dr. Gibbs and all of a sudden the children come along and my line is, "No sir, it's later than I thought, there are the children coming home from school already." So even he doesn't know what's really going to happen fully. So you have to remind yourself to forget what happens.

Speaking of what happens next, what's happening next for you after the production closes? Well, it's not closing any time soon. They're selling tickets through the end of September. [Ed.: Since Cromer spoke with us, Our Town was extended through January 31st.] I leave August 16th and I have a week off and then I'm directing the Neil Simon revs on Broadway, which are Brighton Beach Memoirs and Broadway Bound, and then there are some other things about that, and then next year I'm going back to Chicago to a theater I work at a lot called Writers' Theatre to direct A Streetcar Named Desire. But hopefully the show Our Town will keep going as long as people are coming. I think they can make it through the holidays.