The internet lit up like the foot of a cigar on a hot New Jersey night when Vox published a feature story yesterday about David Chase, the brilliant-but-depressed auteur behind The Sopranos. Overall, it's a fantastic profile of Chase, focusing on his love for ambiguity and mystery in art. Unfortunately, the peg of the piece came back to Chase's least favorite subject of the past seven years: did Tony Soprano die right after the show went to black in the series finale? And his "answer" will leave you feeling like a piece of gabagool.

Here's what Chase said to writer Martha P. Nochimson when she needled him about whether Tony is dead:

I had been talking with Chase for a few years when I finally asked him whether Tony was dead. We were in a tiny coffee shop, when, in the middle of a low-key chat about a writing problem I was having, I popped the question. Chase startled me by turning toward me and saying with sudden, explosive anger, "Why are we talking about this?" I answered, "I'm just curious." And then, for whatever reason, he told me.

On occasion he breaks his reserve, but makes it clear that I am not to write about anything he says that is an interpretation of his own work, since he believes that the art of entertaining is leaving the audience imagination to run wild. So when he answered the "is Tony dead" question, he was laconic.

Just the fact and no interpretation. He shook his head "no." And he simply said, "no he isn't." That was all.

Here's the thing: the article is (mostly) great! The point of the article seems to be that whether or not Chase answers the question, it doesn't matter, because that's not what The Sopranos was leading to, that's not what Chase was trying to say about life, and that's not who he is as an artist. There is a wealth of text and subtext to mull through with The Sopranos, enough that seven years later, people are still piecing together meanings (just look at how Nochimson unpacks the first season episode "Isabella" in her piece).

But here's the thing: the article is great EXCEPT for the emphasis on the question. Even if the writer meant to use the "revelation" as a means to push past the dead weight of the Tony query and get to the heart of Chase's art (and Tony's spiritual malaise), it didn't work. Because all anyone wanted to talk about was Tony. People have been obsessed with this question for years, and it wasn't helped by Vox.

Did Tony die at the end of The Sopranos? After 7 years, David Chase finally reveals the answer http://t.co/J0ndIkdGQr pic.twitter.com/Ub0EhOnY15

Not to mention the fact that the last line of that text above—the really important quote with the tell-tale "no"—comes in the middle of an extremely irritating, funereal black graphic in the middle of the piece. It undermines the seriousness (and the point) of the rest of the article. If you want to understand the show and that fleeting feeling Chase was getting at, analyze Tony's sessions with Dr. Melfi, his fever dreams, his second life as Kevin Finnerty. Think about the ducks, not this bullshit. 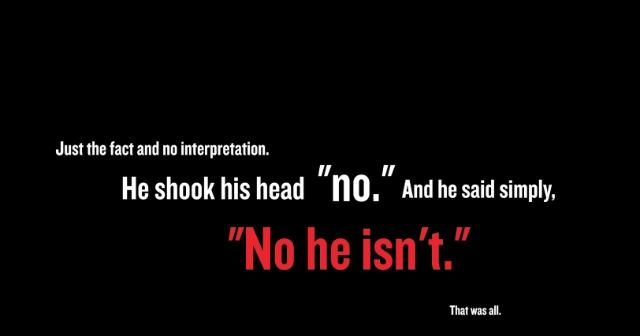 So considering the fact that Vox squeezed the living hell out of the "Tony is alive!" angle, it's no surprise that Chase took umbrage with the piece later. His publicist said in a statement last night:

A journalist for Vox misconstrued what David Chase said in their interview. To simply quote David as saying," Tony Soprano is not dead," is inaccurate. There is a much larger context for that statement and as such, it is not true.

As David Chase has said numerous times on the record, "Whether Tony Soprano is alive or dead is not the point." To continue to search for this answer is fruitless. The final scene of THE SOPRANOS raises a spiritual question that has no right or wrong answer.

Tony Soprano lives on because The Sopranos is one of the richest TV experiences in the history of the medium. As Todd VanDerWerff eloquently put it in a followup piece on the he said-she said:

Nothing is proved by a one-word answer to a complicated question; instead, it only opens more questions.

To suggest otherwise is to wipe our hands of all of the unsettling questions that final scene suggests, just as much as the insistence by many "Tony's dead!" proponents that anyone who disagreed was willfully misreading the series does. To suggest otherwise is not just to pretend that we can understand The Sopranos on some definitive level but that there must be a tidy answer for everything in life, no matter how banal. And I like to think we all know that's not true. That's part of what David Chase taught us.

Anyway, after all is said and done, after all the complaining and the theorizing and the blockquotes and the out-of-context quotes and all the fucking bullshit, is this all there is?

#david chase
#death
#mysteries
#television
#the sopranos
#tony soprano
#tv
#original
Do you know the scoop? Comment below or Send us a Tip