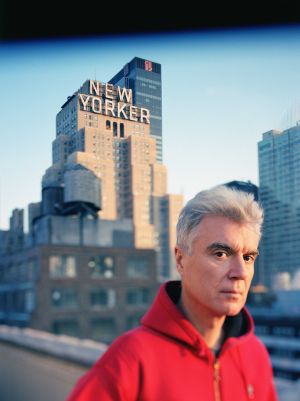 On Tuesday night at St. Ann's Warehouse, David Byrne, longtime advocate of bikes, big suits, lamp dancing and PowerPoint, will be joining a who's who list of New York performers to observe the fifth anniversary of the official start of the Iraq invasion. Called Speak Up!, the sold-out show is raising money for United for Peace and Justice and Iraq Veterans Against the War. If you don't have tickets, you might want to skip over the list of artists you'll be missing: Laurie Anderson, Antony, Lou Reed, Blonde Redhead, Bill T. Jones, Norah Jones, Moby, Damien Rice, Scissor Sisters, DJs MEN. Naomi Klein, author of The Shock Doctrine: The Rise of Disaster Capitalism will be a featured speaker, among others. But before the concert, from 4 p.m. to 7:30 p.m., Klein and a other activist groups will host a free forum, book signing and art exhibit at the nearby Powerhouse Arena bookstore [37 Main St, DUMBO, Brooklyn].

Yesterday Byrne responded to some political questions via email.

What was your opinion of the Iraq invasion when it started almost five years ago? Big big mistake was what I thought. Hans Blix, the U.N. inspector, couldn't find any WMDs and if he'd been allowed to complete his task – by the U.S. – that would have been that. But as we know, the facts were "made" to fit the pre-determined policy. This was, to some of us, obvious at the time. I had no private inside information that helped me in this decision- I read the same news sources as everyone else. I just didn't believe anything the Bush administration said and I still don't.

What do you think should be done now? We should get out ASAP. The invasion was illegal and we don't belong there. The argument that we need to repair the damage we've done is silly – as long as we're there the "damage" will continue and spread wider.

Did you think the invasion of Afghanistan was right? I thought it was right to go after the Taliban and Bin Laden. But even there the goals were not clear – still aren't. The hunt for Bin Laden was more or less called off. WTF? And the Afghan economy was pushed back to poppy production – good going guys!

Are you involved in any other political activism? I occasionally make my presence felt as a bike rider in New York.

Auden wrote “Poetry makes nothing happen.” Do you think art can help advance progressive causes? Music, and sometimes art, can engender a sense of solidarity – that there are others who feel the same way. They can articulate an unspoken feeling sometimes too. But as far as making something happen – no, I don't think songs and paintings cause change. They reflect it, and sometimes articulate it, but they don't cause it.

Were you in New York City on September 11th, 2001? How did you spend that day? I lived downtown then and I pedaled up to my daughter's school and later took in a friend, his family and their cats.

Do you remember where you were almost five years ago when the invasion of Iraq began? Do you remember how you felt?
I was here in NY and along with some other folks we took out full page ads in the New York Times and Rolling Stone urging no invasion and let the inspections continue. It was significant in that hip hop, rock and country musicians were all signatories.

Some argue that by engaging Al Qaeda in Iraq, America is proactively fighting terrorism. How does that argument sit with you? Al Qaeda had nothing to do with Iraq; that's a Cheney myth. They managed to get support there AFTER the US invasion – as many predicted. The invasion was a recruiting poster for them.

What's motivating you to participate in this Speak Up! event at St. Ann’s Warehouse? Purely selfish. It eases my conscience to bear witness against this mistake. To be seen to stand against Bush policy. It's also a nice way to meet and collaborate with other musicians. And lastly, less selfishly, it might raise some money for some orgs that are doing some good work.

What will you be performing Tuesday night? Huh? Am I not on the bill? Yes, I'll be doing two songs that I think resonate with this issue. Nora, Jake, Ana, Damien and others are going to learn the harmony parts- so that's exciting.

What are you working on now? An audio installation at the Marine Ferry Terminal – you know, that beautiful empty building at the foot of Manhattan. (The Battery Maritime Building? - Ed.) Creative Time is helping. It'll open at the end of May.