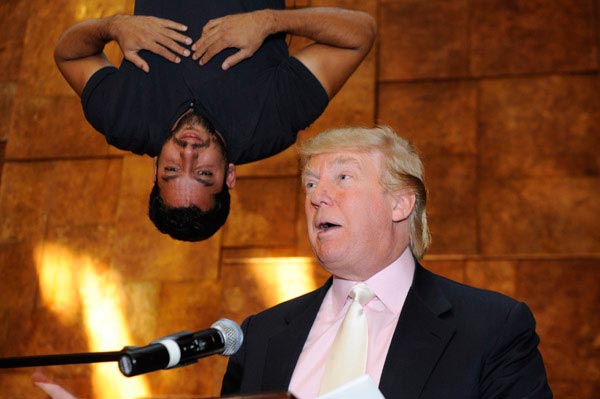 Street illusionist-stunt fiend David Blaine embarked on his 60-hour project to hang upside over Wollman Rink in Central Park. While doctors say his head won't explode from doing The Dive of Death (as it's called for his ABC special), he could very well go blind.

Last week, at a press conference with Donald Trump (Trump operates Wollman Rink), Blaine demonstrated his upside-down hanging skills. He told reporters he stopped eating a week ago, "I dropped twenty pounds, which makes it easier on the body and I don't have to go to the bathroom number two." Like his Lincoln Center fishbowl stunt, he will be using a catheter. As for the reason why, he said, "The point of all these things is I think we can endure much more than we think we can. Like, I think we can take everything – we can turn our world upside down, but we can still endure because human beings are amazing."

The Donald agreed, "I have learned from David. You would really think that some of the things he’s done are not physically or mentally possible. You can do things in your own mind that you don’t think you can do.”

#david blaine
#Dive of Death
#donald trump
#wollman rink
Do you know the scoop? Comment below or Send us a Tip