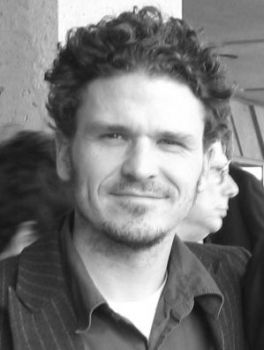 Sure, you know Dave Eggers as the celebrated author and founder of McSweeney's, that plucky independent book-publishing house in San Francisco, but were you aware that back in the day he was on track to be an art curator? While it’s been a long time since he’s organized an exhibit, he’s in town now to put together a show at apexart that explores, in Eggers's words, “a very small and specific type of artmaking exemplified by contemporary people like David Shrigley, Raymond Pettibon, Nedko Solakov, and Tucker Nichols. This kind of art, which we refuse to name, is somewhat crude, usually irreverent, and always funny. It exists somewhere between one-panel cartoons and text-based art.” Over 100 works will be on view, including pieces by Jean-Michel Basquiat, Leonard Cohen, R. Crumb, Henry Darger, Kurt Vonnegut and many more. The opening reception is tomorrow night from 6 p.m. to 8 p.m., with the work on view through May 10th.

You’ve got so much on your plate; what is motivating you to organize this exhibit at apexart? About a year ago Kerri Schlottman at apex just wrote to me saying, “Do you want to curate show?” And I did that in college; I ran a gallery when I was in school and I worked at galleries over the summers in Chicago. I studied art, you know? That was my background. I guess it just pulled on something that I hadn’t done in many years and it also sort of coincided with an idea we had had at McSweeney’s, which was to collect a certain kind of unclassifiable art that combined image and text and humor, and there wasn’t really a name for it. We were thinking about putting it in an issue of the magazine; she wrote to me in the same week we were discussing it and we figured since we were doing it anyway that we might as well combine the two.

Your introduction to the exhibit describes the common ground shared by the work in the show and you say they "could be described as cartoons." Do you think the word cartoon makes something less significant? Well, I think there’s a really wide range of style and quality, I guess. It could mean some of the not so great things that are syndicated these days. And there are some good things in the newspaper.

What do you like in the newspaper? Oh, I don’t know. Whenever I try to think of stuff off the top of my head like that I always regret not naming something else. But you know I’ve been a comics reader since I could read and I still read the comics every day. It was what I wanted to do since I was a young kid. So I’ve always had a soft spot for the form and I also thought it wasn’t a sin for art to have a narrative purpose to it. And all of us organizing this appreciate a little levity in the art world because in the past there’s been a little bit too much self-seriousness in the world of visual art.

The show is called Lots Of Things Like This. How did that title originate? [Laughs.] I think it was really just something I said at some point when we were putting the book together. I think I just said, “It’ll just be lots of stuff like this.” In the art world there’s often an effort to give work more heft with a title. In this case I wanted to resist titling or naming a style of art, to avoid shoehorning groups of people together in a way that serves the curator and not the artist. So we decided to back off that and not name the show and not make it overly serious. We just wanted to show a lot of work that had some elements in common that would be fun to look at. And also there’s a very sort of democratic nature to this kind of work, where you have people who aren’t necessarily draftsmen and we also have people from other arts, from David Mamet to Leonard Cohen.

Yeah, the list of artists involved is really eclectic. How did you get some of these people? Mamet was here [San Francisco] a few years ago when a gallery here showed his cartoons and they put out a book of it. I thought it was really impressive that this incredibly accomplished playwright also did these very goofy cartoons. And then a lot of it was names off the top of my head, from Raymond Pettibon to Maira Kalman to some of the people we started with, people who we thought just didn’t fit into other categories. And after that there’s a young guy working with us, Jesse Nathan, who is interested in the show and he sort of took the lead in finding new other practitioners. He found so many of the best artists. He found David Berman, who we knew really well as a poet and a songwriter, but I had no idea that he drew and did these sort of cartoons.

So Nathan would show up in the office and say, “Look what I found!” We also tried to get people going all the way back to Goya. There’s an impulse to write on a drawing or draw on a painting – especially, at least when I was a painting student, when you think something’s not going well. You might write “this sucks” or “I don’t know how to draw hands.” So a lot of what we included was sort of an extension on that, a comment on the drawing that occurred to the artist afterwards. But all the people come at it from different angles.

This is big. There are about 100 works in the show. Is that right? Oh yeah, could be. I haven’t counted; you know, we have so much more actually, too. We probably have three times that number this time and we’re trying to make it into a book that Jesse is spearheading.

I wasn't aware there was a book in the works. Well, we did a short 72 page book that will be in the next McSweeney’s. And then we’re hoping to maybe do a bigger one that we won’t have to edit down so severely.

Is any of your work in the exhibit? No, I didn’t think that was appropriate. I do this kind of thing but I would horrified to see my own work up there next to these artists.

Are you coming to New York for the opening? Yeah, I have to hang the show. I haven’t hung a show in almost 20 years, so I’m really excited to do that. So Jesse and I will be out there to do that and stay for the opening.

I didn’t know you were so hands-on with this. Oh yeah. I was so happy to be asked. It was a life path I thought I might go on when I was in school. It was really what I was studying to do. So I miss it in a way and it’ll be fun to get back in. It’s not as ambitious as some of the stuff that apexart has done but we’re thankful they’re letting our decidedly unserious show occupy their walls for a little while.

Do you miss anything about New York? Sure. I miss Brooklyn more than anything. I miss Prospect Park; I used to go to the zoo every other day. But I’m there enough; I still have to be in New York like six times a year probably. So I don’t miss it very much, I get to visit 826NYC in Brooklyn a lot.

Is there any bar or restaurant you always look forward to going to when you’re back in town? I’m actually not a food guy and can never remember the places I eat, which wouldn’t please your advertisers, I guess. But the only place I make a point of eating is ACME. I’m a ribs guy and they have great ribs.

What else are you working on now? Oh, there’s always different things. I’m trying to live right now without too many deadlines. Right now we’re in the middle of finishing the Best American Non-Required Reading, which is a book I edit with my High School students. We’re meeting in a few hours to start laying out the book; I guess that’s the most immediate thing.

And what’s the status of Where the Wild Things Are? Some test footage surfaced, and then there were rumors that the studio was demanding extensive reshoots? Unfortunately I’m not the spokesperson for the movie but it’ll be great when it’s finished. I think everybody has full confidence that there’s nobody better in the world to have made it than Spike.

#apexart
#art
#cartoons
#dave eggers
#exhibit
#gallery
#interview
#Lots of Things Like This
#McSweeney's
Do you know the scoop? Send us a Tip