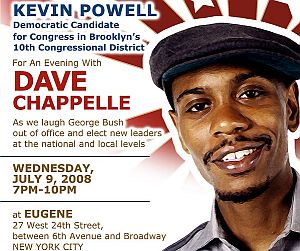 Everything’s connected: Kevin Powell was a star in MTV’s very first season of The Real World – now he’s campaigning to be the congressional representative for a district that includes the location of the new Real World apartment in downtown Brooklyn. And not only that, Powell is enlisting the help of comedian Dave Chappelle, who once lampooned the reality series in a hilarious skit called The Mad Real World. Go ahead and take a minute to let all that sink in.

The Observer has it that Chappelle will be performing at a fundraiser for Powell, a Democrat, next month; it’s the comic's first major foray into political advocacy. In addition to helping Chappelle “laugh George Bush out of office,” you can also get your photo taken with him at the event for a donation of $2,300. And for no additional charge, Chappelle will punch you for quipping, “I’m Rick James, bitch!” (He loves that.)

#Congress
#dave chappelle
#event
#fund-raiser
#july
#kevin powell
Do you know the scoop? Comment below or Send us a Tip
A new Gothamist is coming! We’ve moved comments over to our beta site. Click here to join the conversation and get a preview of our new website.