Danny Strong On Bringing J.D. Salinger To Life In 'Rebel In The Rye' 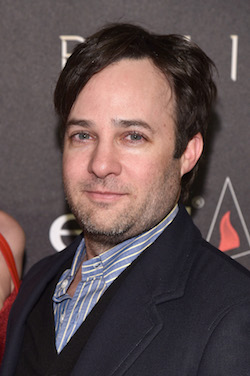 Danny Strong's a triple threat. Though he's most recognizable for his roles on beloved television shows like Buffy the Vampire Slayer, Mad Men, and Gilmore Girls (and has popped up in cameos in everything from Seinfeld to GIRLS to Grey's Anatomy), he's also a prolific screenwriter, having written Recount, Game Change, Lee Daniels' The Butler, and served as the driving force behind the television show Empire.

Now, he's trying his hand at directing—his feature directorial debut, Rebel in the Rye, digs into the life of reclusive author J.D. Salinger (played by Nicholas Hoult), following him from an inspirational writing course at Columbia University through the success of Catcher in the Rye that ultimately drove him into seclusion.

Though Salinger did his best to stay out of the public eye, Strong, who also wrote the film's screenplay, used Salinger's works, letters, and the biography J. D. Salinger: A Life by Kenneth Slawenski to recreate some of the most pivotal moments in the famed author's life, including his relationship with Eugene O'Neill's daughter, Oona (who later married Charlie Chaplin); his friendship with Story magazine editor Whit Burnett (played in the film by Kevin Spacey), and his time fighting in World War II which, the film purports, left Salinger with crippling post-traumatic stress disorder that turned him onto Buddhism and helped him craft some of his most celebrated works.

We caught up with Strong to find out what it took to bring Salinger to the big screen, and got the inside scoop on his return to Stars Hollow in Gilmore Girls: A Year In The Life. We also found out how he feels about bike lanes.

Why J.D. Salinger? He's this great American enigma and part of this great American history. When I read a biography on him, I was extremely taken by his story and by the fact that he was a veteran in World War II and that he had PTSD symptoms, and had written Catcher in the Rye while dealing with those symptoms. And the fact that Holden Caulfield was a creation of a vet was completing fascinating to me. I also really loved dramatizing the writing process and the creative process, and what me and so many writers go through to be able to dramatize that in a film was really exciting to me.

How did you recreate some of the old school city spots that make cameos, like Caffe Reggio and the Stork Club? Reggio, we just used, but then you have to add period details and period signs, and block out anything that isn't period. One of my favorite things we did, was we shot outside of the Cherry Lane Theater and we put a new marquee up. There was a 1945 marquee, as opposed to one from present-day. Transforming the Cherry Lane Theater like that was really cool. Then, you know, it's a lot of set deck. We had very talented production designer in Dina Goldman and I think she did a beautiful job.

J.D. Salinger feels like a uniquely New York character, certainly through his writing, and it's addressed in this film. Can you talk a little bit about the author's connection to the city? Yeah, he grew up in New York City. He was a creature of New York City. He went to NYU for a little bit, McBurney High School before he was kicked out—he seemed to leave all these schools prematurely—and lived on the Upper East Side. That's where he grew up, on Park Avenue, and just lived a New York City life, going to the Stork Club and jazz clubs downtown and bars. It's part of what fascinated me about him, was that he was so famous as a recluse and then when I read about him, he was this man-about-town until after the war and after the success of Catcher in the Rye. That's when he ended up fleeing to the country.

Was there anything that you did to put yourself in Salinger's mindset, while writing this film?
The two most helpful elements in trying to get in to his mindset were reading the works and his letters. I read a ton of letters that he had written.

Did you find out anything particularly surprising while researching him? The fact that he was writing The Catcher in the Rye in World War II and that he stormed stormed the beaches of Normandy on D-Day with six chapters of the book in his bag. Those details just blew me away. I was really moved by them and thought they were really powerful.

So, also, you are the force behind Empire. We did notice that though Empire takes places in New York City, but since it's filmed in Chicago, it doesn't always look the way it should. Can you talk a little bit about how you tried to make it not look like Chicago? We do the best we can. I was really disappointed that we didn't get to shoot in New York and I fought for it and lost that fight. Chicago seemed like the next best place to try to double as New York. We cut the stock footage in NYC for our transitions in between scenes, but often times, the look isn't as successful of looking like NYC as I would have liked.

Between acting, directing, and writing, which do you find the most difficult, which do you like the best, and which do you wish you could do more of? I like writing the best and I do directing as an extension of the writing process in a way. I really love directing but it's really labor-intensive and really difficult. It's all-consuming for a long period of time, whereas a writer, I could work on multiple project at once. So I'd have to say writing.

I have to ask this because we're a Gilmore Girls-obsessed office... Absolutely! Do it.

We were so excited about your return as Doyle. I was too.

Was Doyle's transition from journalist to screenwriter based on your actual life, or did [Gilmore Girls executive producers Amy Sherman-Palladino and Daniel Palladino] come up with that on their own? You have to ask the Palladinos. I have a sneaking suspicion that it was inspired by my actual life.

What was it like going back to... I guess you weren't technically in Stars Hollow, but what was it like going back to the set? It was amazing. I was only there for a day, I wish I could have been there longer, because it was so fantastic seeing everyone again and particularly Liza, I love Liza. She's just the absolute coolest person and she's so sweet and so much fun to hang out with. It was great seeing [Gilmore Girls star Alexis Bledel] and I love the Palladinos. I think they're the absolutely coolest and they're so sweet and it was just wonderful.

Do you have any exciting new projects coming up? Nothing in the hopper

Do you live in New York? Yeah, I live in the Village.

What's your favorite thing to do here? Ride my bike around the city. I love to wake up a little early, like around 7 a.m. when it's not that crowded and just bike around, listen to music or a book on tape.

Are you a supporter of bike lanes in New York? Oh, yeah, definitely, because I use them. I wish there were more.