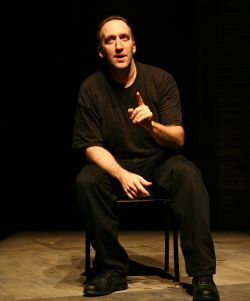 Danny Hoch is widely renowned for bringing authentic stories from the New York City streets into the often effete and insular world of theater. While you might recognize him from his supporting role in last year’s We Own the Night or Whiteboyz, the '90s film he wrote and starred in, he is most known for his work on the stage. His latest show, Taking Over, is a return to his signature one-person shows where he takes on a wide spectrum of New Yorkers. In this show, he tackles the hot button issue of gentrification, focusing in on the transformation within Williamsburg primarily from the perspective of natives who have lived through the influx of new residents coming into their neighborhood. The result is a show that often tiptoes an uneasy line of venting the frustrations of lower-income New Yorkers who hoped the impact of new money would mean better hospitals and instead have woken up to an abundance of muffin shops. Taking Over is running at the Public Theater through December 14th.

You performed this show for free at various spots around the outer boroughs before bringing it to the Public. How did you find the reactions differed? The biggest thing is how people perceive the different characters. In the outer boroughs, the character who begins and ends the show (a man who has just been evicted from his apartment and publicly confronts the newcomers who have moved into the neighborhood)--he was held up as a hero out there. At the Public, he’s come across to a lot of the audience as threatening. But more people from the outer boroughs are starting to come out to the Public. So that’s been good.

A lot of the show takes on the new breed that has moved into Williamsburg. Did the performance you did out there end up creating a sense of confrontation with those in attendance? For that show, we had 1000 people come out to see it. About 500 of those were Latinos from the neighborhood, 150 were Polish-Americans and maybe another 100 were Italian-Americans. 100 got tickets as giveaways from Time Out New York and most of them seemed to be coming over from Manhattan. The rest were new arrivals to Williamsburg. So no.

I imagine that people seeing this show in neighborhoods who have been uprooted have a strong response to it. Yeah, a lot of people from the boroughs who came out get really into it cause they see characters saying a lot of things that they say among themselves, but don’t wanna say in public. And they generally don’t hear anyone talking like this anywhere on television cause it’s not politically correct or they don’t wanna come across as hostile. Take someone like Charles Barron. He’ll come out and say something that a lot of people aren’t used to hearing and it’ll be taken as hostile.

That being said, isn’t there a hostile tone throughout a lot of the show? Colonialism is hostile. Gentrification is the same thing as colonialism more than most people would like to admit.

But isn’t gentrification more passive aggressive when compared to a character in the show who gets in your face and yells, “Get out of here!”? It depends on who’s looking at it. Forcing people out of their homes isn’t very passive.

In the show you talk about how you have to take your shows on the road, that you can’t make a living telling New York stories in New York. Why do you think that there’s not enough of an audience to make that a livelihood for you? The biggest playwright in New York is from Ohio—Adam Rapp. And he writes plays about people’s experience living in New York and being from Ohio. And that is able to sell more than the experience of natives.

So instead you take what you call your “New York Pony Show” for people around the country to come and get a “real New York experience.” Do you think that this one with such specific subject matter will play just as well? We’ve already taken it a couple other places. Gentrification is going on everywhere right now. People from the Midwest move to Chicago. People from the northwest move to Seattle or Portland. People from the west coast move to San Francisco—nah, Oakland.

And what’s connecting them all? There’s a new feudalism that’s taking place. The kings and queens were the ones who built up and ruled the cities. Then they had all the serfs working the land. But then the kings and queens didn’t want to deal with all of the serfs’ problems, all of the things that go along with poverty—crime, drugs. So the kings and queens moved away from the cities into the suburbs. The serfs that were left here started to rebuild the city, built it up again. And in the meantime, the kids of the kings and queens in the suburbs started to get really bored. So now they feel safe enough to come back into the city, into the serfs’ neighborhoods. Half of the serfs see that and are basically like, “Get the fuck out!” And the other half are saying, “Wait, how much rent did you say that you’re willing to pay?”

These kids that come in take on a simulated struggle: “There’s cockroaches in my apartment…My landlord raised my rent…I got mugged…It’s cold in New York.”

A simulated struggle would be if they were going through those experiences, say, in a video game. Well, that’s going on too now, isn’t it?

Heh—yeah, I guess it is. But why do these kids go to such lengths if they’re going to end up suffering more than where they came from? Because America is like no other country in the world in that we feel it’s our responsibility to get away from where we live. If you’re poor in New York, you wanna get out of that. If you’re bored in the suburbs, you wanna get out of that. No other country in the world can you not buy a plane ticket or a bus ticket on a holiday like Christmas or Thanksgiving because it’s sold out.

#adam rapp
#colonialism
#danny hoch
#gentrification
#interview
#public theater
#taking over
#theater
#williamsburg
Do you know the scoop? Send us a Tip
A new Gothamist is coming! We’ve moved comments over to our beta site. Click here to join the conversation and get a preview of our new website.