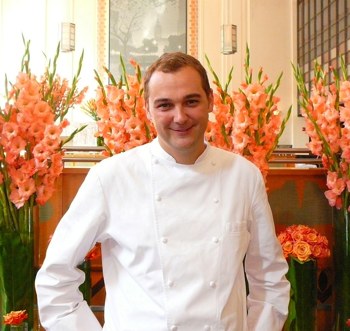 One of the most well revered and talented chefs working in the city these days is Daniel Humm at Eleven Madison Park. Humm first learned his trade working at a few top rated restaurants in his native Switzerland, and credits Gérard Rabraey at the Michelin 3 star Le Pont De Brent as his mentor. Now in New York, the chef (who will turn 31 at the end of the month) continues to develop his particular style of cuisine at Eleven Madison Park, which received a 3 star rating from the New York Times in January. We sat down with Daniel Humm last week in the restaurant’s dining room to talk about influences, food television, and what happens when a bunch of chefs get together and Daniel Boulud decides to make scrambled eggs with truffles at 1 AM.

You came to New York from San Francisco, where you won a Food & Wine Best New Chef award in 2005. Do you see a lot of differences between the restaurant scenes in New York and San Francisco?
Definitely. There are a great many more restaurants in New York, and on many levels I’ve found it’s more competitive – from finding staff to finding ingredients to making sure our guests are happy. In New York, you really must to be on top of your game to keep everything going. The cost of doing business here is just incredibly high. In San Francisco, the majority of the restaurants are ingredient-driven. In New York that is true as well, but there’s also a greater focus on technique.

Your preferred technique and personal style of cooking is sort of unusual. You cook most of your proteins at lower temperatures, rather than with high heat. Can you talk a little bit about that and how it evolved with you?
It’s definitely different from how I learned it. Chefs were always saying “sear it hard on the outside so the pores close,” or, “get a nice crust on it – that tastes best.” While this is fine, it is not always necessary. If you are working with high quality products, you can elevate the flavors more by cooking it at a low temperature than you can by searing it. This is especially true with fish – where (even if you keep the skin on to protect the meat) the outside will always be overcooked if it is seared because of the high heat. While the center may be perfect, the outside will not. Low temperature cooking provides a very even and consistent texture throughout.

You’ve worked with both Harold McGee and Herve This, incredibly influential pioneers of combining science and cooking technique with the goal of producing better flavors on the plate. You’ve said you’re not particularly interested in inventing new, crazy flavor pairings, that you like working within a more traditional framework. Does molecular gastronomy interest you as a chef?
Passion for what you do is essential to success in any profession. That passion naturally keeps you interested and aware of everything that is going on around you, anything affecting your craft. So while you might not necessarily be interested in applying these techniques or embracing the trend as a whole, you’re at least educated in your decision and better able to determine what (if anything) you’d like to incorporate in your own kitchen.

On a very small scale we bring elements of molecular gastronomy into our kitchen. This happens mainly with our longer menu. For us, a thirteen course meal is the right forum to present these techniques, some of which I find extremely fun, to guests. We’ll try to present familiar flavors with a technique that is perhaps less familiar to guests. We always try to offer our guests something we think they will have fun with and get excited about; something unexpected. For example, right now we have an insalata caprese on the menu. This is not the traditional version of the dish as most people know it. We blend fresh mozzarella with the water it comes in and then we drop this mixture into a sodium alginate bath. It forms these little bubbles filled with the mozzarella water and thin layer of skin on the outside. We then do the same thing with tomato water, dropping it into a sodium alginate bath so it forms the same type of bubbles. We plate it as two spheres on two spoons, with one sphere holding the mozzarella and the other the tomato. It’s a fun little course.

Do you watch the Food Network at all?
No.

Do you ever watch any food competition programs on television?
I hate to admit this, but I’ve never even watched Iron Chef. Not once.

They’ve probably asked you to be on Iron Chef though, right?
To be honest, it’s just not my thing.

What’s you’re advice for a commis in your kitchen, or someone who’s just starting off working in a restaurant anywhere who wants to be a chef?
When you look at a kitchen, you tend to see that the people who are doing really well are those who have worked with the same chef or stayed in one restaurant for a significant amount of time. I think it’s very important to your development as a chef to find a restaurant where you really like the food, and to make the commitment to stay there for 2-3 years, working every single station. That way you have a deeper understanding of everything that goes into the kitchen. Another thing to consider is that I started cooking when I was 14, and I grew up surrounded by food so I already had a basic knowledge at a young age. Of course, I was raised in Switzerland, and beginning formal training at 14 was not uncommon in Europe. In America, on the whole, people get a later start. So it’s just a matter of being patient, and understanding that it takes a good amount of time to become a chef.

If you had the opportunity to cook the best 15 course meal you’ve ever made- I don’t know who you’re making it for- but you could pick three chefs, living or dead, to cook with, who would you pick?
Fredy Girardet, Alain Chapel and Gérard Rabaey.

You were already working at restaurants in Switzerland when Girardet retired in 1996. Did you ever work for him?
I staged for a time at Girardet. But then I went to work for Rabaey, because I was aware that a lot of things were about to change at Girardet.

Not a lot of people in the United States know about Girardet.
No, I know. I think these would be the three that I would love to cook for. Robuchon, Boulud and Ducasse are up there with the best, and of course Thomas Keller is amazing as well. But Girardet, Chapel and Rabaey would be who I’d like at my table.

Is there a place in New York where you go for a nice, inexpensive meal?
On the weekends my girlfriend and I will stop by DiPalo and buy some stuff to bring home and cook. I only have one day off a week, and that’s what I like to do.

What’s your idea of a perfect day off in New York?
There are different “perfect" days off depending on my mood. I like to go to the farmer’s market and to butcher shops. We cook at home a lot, which I enjoy. I’m a cyclist, and another thing I love is to go on really long rides, spending the day biking with friends.

We have a question about your strangest NY story, usually something that happens here that probably wouldn’t happen anywhere else. You got one of those?
A great one was related to this year's James Beard Awards. I was nominated for an award, and during the ceremony we said that if I won, we were definitely going to throw a party here at the restaurant. When I didn’t win, we were all kind of bummed out. But Will (our General Manager) and I decided to have a party anyway. We were like - we don’t care, we’re still going to celebrate. So we invited a lot of other chefs we ran into over the night to stop by. And, at about 1 o’clock in the morning, people started showing up. It was probably about 80 people. The bar was full; many of our chefs were still here, partners from our restaurant were here, Daniel Boulud was here, even Susan Ungaro, President of the Beard Foundation was here. It was amazing! Eventually, everyone wound up in the kitchen – and we just started cooking. Daniel was making scrambled eggs with truffles, we were preparing whole tenderloins – things like that. It was a great night. And I definitely don’t think it would have happened anywhere except New York.