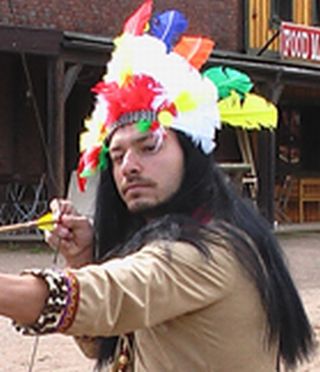 A new German theatrical road show called Start Up takes over P.S. 122 this week. The zany production fuses live performance with simulcast video to tell the story of some oh-so-sincere Germans as they struggle to acquaint America with their wondrous world of theater. Upon finishing their New York run this week, the team will pile into a tricked-out green school bus and embark on a 7 week tour of the states. But rather than bring their quirky show to the typical cosmopolitan cultural centers, the group will be performing in unconventional venues in tiny towns like Death Valley Junction and Edmonton, KY, where it’s likely the aging populous hasn’t seen German theater since D-Day.

Daniel Brunet, who translated the play into English, recently answered our questions about Start Up. The play continues through Sunday; tickets cost $20. (You can follow the group’s adventures virtually via their neat interactive website.)

What is Start Up?Start Up is a brand new play by Roland Schimmelpfennig commissioned by German Theater Abroad (GTA) especially for the Road Theater USA project. Schimmelpfennig is Germany's most produced contemporary playwright; his plays have been produced in over 50 countries and translated into over 20 languages.

Start Up is written for 3 German actors and 2 US actors and its premise, three young German traveling through the United States in search of a building to start up a business (a theater) mirrors our actual 7 week, 24 city road trip across the United States for performances of Start Up.

Tell us about a few of the venues where you will be performing your multimedia German performance piece. Our Artistic Director, Ronald Marx, dramaturg Dagmar Domrös, and myself set off on a five and a half week advance trip on May 28th, which took us from New York to Los Angeles in search of venues for the tour this fall. At the beginning, we were unsure how the response would be, particularly because we did NOT want to perform in traditional theater spaces…our production is actually built to be performed environmentally, site-specifically in a variety of non-theater spaces. We were amazed by the response and returned from the trip with 24 venues on our list. Some of the most interesting are:

An airport hangar in Birmingham, Alabama. Our contact there, Trish Coghlan, head of the Germany-Alabama Partnership, happens to operate a charter flight company out of it.

And, perhaps the strangest place we’ll be performing is at the Amargosa Opera House and Hotel in Death Valley Junction, California, operated by Marta Beckett, who has been there ever since her trailer had a flat while she was vacationing in Death Valley with her then husband in 1967. Taking the trailer to a gas station, they came upon what was left of Death Valley Junction, an industrial town founded by the Pacific Borax Mining Company in 1924 and then abandoned in the 1940s. Marta caught a glimpse of the old community center through a hall in the wall and decided, on the spot, to refurbish it, turn it into a theater and perform her dance pantomimes there, which she has done ever since. She’s also painted an audience for herself on three walls of theater, a 16th century Spanish royal audience. We’ll perform in her old garage, where the trailer that brought her to Death Valley Junction still resides.

If someone at a gas station in Alabama asks you why he should come see Start Up, what will you tell him? I’d tell him that he should come out because we’ve come all the way from Berlin to thank him and the United States for everything that they’ve done for Germany since the second World War. 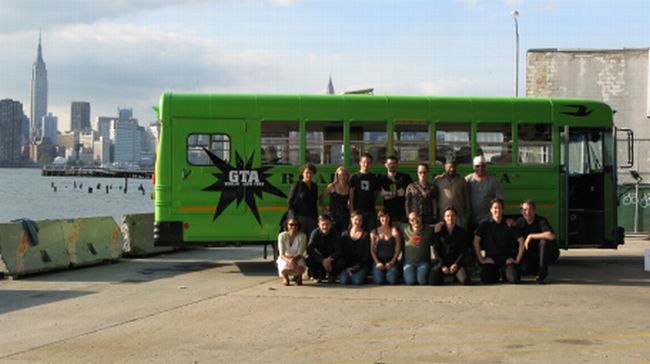 Part of the play delves into the horrific aspects of World War II. How do you feel about the current state of U.S.-German relations? Well, relations can refer to so many different levels…person to person, German and US relations are very open, affable and pleasant. And on the heads of state level, tension has certainly dissipated since the Chancellorship of Gerhard Schröder and Donald Rumsfeld’s invectives of “Old Germany”. Aside from Bush’s awkward massage of Angela Merkel last year, relations at the national level seem to be rosy.

Most New Yorkers oppose the Bush administration. Are most Germans able to distinguish between the actions of a rogue White House and the majority of Americans who bitterly disapprove of this administration? I think what always impresses me about Germans is the level of political awareness. I’ve certainly found myself in conversations with Germans who can discuss the minutia and fine details of US politics with me as articulately as any of their counterparts in the United States. A few years ago, an acquaintance expressed his frustration with the current state of world politics in a really enlightening manner, saying how unfair he found it that the actions of the United States often affect the entire world and yet the entire world does not have a voice in determining who runs the United States; they can only wait and hold their breath.

I think Germans are sometimes surprised by how relatively few people from the United States travel abroad. A figure I read a few years ago said that about 10% of US citizens hold passports; with the reforms concerning Canada, Mexico and the Caribbean, that figure has climbed to 21%, a record. Given their level of political acumen, the Germans are also pretty clear on the fact the 2000 and 2004 elections have been pretty bitterly contested.

Speaking in vast generalizations, where do you think the United States will be in 50 years? Well, I think that depends an awful lot on the world’s ability to begin to make true, measurable, realistic progress on climate change and radically, radically reducing the United State’s consumption of fossil fuels. Remember the news story a few months ago claiming that if we don’t reverse things immediately that most marine life will be extinct by 2050? We’re at a crossroads, historically, in my opinion. The time of the United States as the world’s uncontested superpower seems to be fading rapidly in the face of the rise of China, not to mention Brazil and India.

Favorite New York restaurant? The whole team has been spending an awful lot of time at Yaffa in the East Village.

Strangest experience thus far in New York? Certainly one of our guerilla marketing runs where all 14 of us jumped onto the tour bus (a lime green former school bus, tricked out for us by my father, Jeff Brunet, in upstate New York) and drove to Times Square armed with flyers and a megaphone to catch Broadway audiences members and TKTS buyers to let them know there was something interesting going on downtown.

One thing about New York City you'd change if you could? It’d be nice to relax New York just a tick or two…I always find it silly that everyone here works so long and so hard that I’m forced to make appointments a week or so in advance to hang out with my friends.

Favorite aspect of New York? The energy. New York is a pressure cooker unlike any I’ve ever experienced…it’s good for me to get away from it a few months a year, but I’ve never lived anywhere where I’ve been so productive.

Given the option of residing in either New York or Berlin, which one would you choose and why? Well, I guess that’s one thing that makes me typically American. I’ll say both. I’ve been spending half the year in Berlin and half the year in New York for the last year, after living full time in Berlin for three years and in New York for two years. The contrast between the two cities, between the notion of living in the cultural capital of my own country and being a stranger in a strange land in my adopted country is really exciting for me.

Berlin is inspiring, and its proximity to so many interesting European cities lets me travel much more freely and easily than if I were starting my trips from Brooklyn. I find German theater and performance very, very exciting and the similarities between my neighborhoods in each city (Williamsburg/Bushwick in Brooklyn and Kreuzberg in Berlin) are really interesting to me…both are suffering from rapid rent increases and gentrification and both have traditional, historical populations who are being forced out and becoming increasingly disturbed by this.

What differentiates the current Berlin experimental theater scene from New York? There are a lot of similarities and, indeed, a LOT of cross over. More and more theater makers and other New York artists are finding their way to Berlin. Both tend to be more overtly political than their mainstream counterparts, although German theater in general is a much more political medium than U.S. theater, which tends to be more concerned with the internal human experience than the external world, if you'll allow me a generalization. But in both cities, the experimental scene is marked by found spaces and tight budgets. Although, to be fair, that tends to mark the "off" scene in Berlin more than the "experimental scene". Berlin, with its specific history, has five state subsidized theaters and one, the Volksbühne would have to be characterized as experimental were it to be compared to its counterparts in the United States. And this is a multi million euro institution with 2 major performance spaces and several other ancillary ones, not one, but two clubs and a primary audience demographic of 18-49. Its focus tends to be auteur driven performance with the director as the primary author of the evening, often based upon freely adapted literary sources.