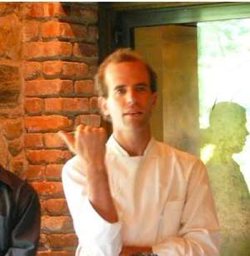 Food writing has changed a lot in the last few years. Its focus has shifted to an almost philosophical arena where any recipe can be dissected for the broader, global meaning of its constituent ingredients. The source of every carrot or celery stalk we eat is inexorably combined with issues of nutrition and environmental sustainability. It’s the Omnivore’s Dilemma effect - people are suddenly grappling with the repercussions of a country that runs on 200 million acres of corn, wheat, soy, and rice. Within the restaurant industry, and for the foreseeable future, it’s far less expensive to source and cook mass-produced vegetables and meat from immense, industrialized farms. This not only comes with a huge environmental cost, but consequently buries the flavors of food.

Dan Barber is increasingly becoming known as a chef-thinker, popularizing simple ideas that upend the way people think about the food we eat. As the executive chef and co-owner of Blue Hill at Stone Barns in Westchester, and Blue Hill in Manhattan, he works with locally grown and produced food every day in the kitchen, concentrating simply on flavor. As a writer with chef-like precision, Barber untangles sustainability and locality issues with sometimes counter-intuitive wisdom- see this Food and Wine article where he suggests smaller yield farmers armed with basic gizmos can supercede the efforts of million dollar, big business R&D money. We’ve covered the culinary side of Blue Hill at Stone Barns before; more recently we’ve made a few trips to Pocantico Hills, just north of the city, to learn more about the various projects at Blue Hill Stone Barns. We spoke with the chef last week, specifically about the 2007 Farm Bill and its effect on New York City. Last Friday, the House of Representatives passed the bill by a vote of 231-191, but the story doesn’t end there.

Can you talk a about the op-ed piece that you wrote for New York Times in January about the implications of the farm bill, where you wrote “we could start by rewarding diversity over yield?”
The basic premise here is that Farm Bill is very much a food bill, and if it were called a food bill, people would be paying a lot more attention to it. It’s massive, omnibus bill that comes up every 6 or 7 years that very few people in metro regions feel very strongly about because the associations are with corn fields, soy fields, combines, and agricultural policy that seemingly have no effect on urban politics. The truth is quite the opposite: the farm bill itself has dramatic effect on how we eat in urban areas, and especially for New York, I would argue. The farm bill is a precise set of rules that determines what our kids eat in schools. It determines food stamps, and distribution of food from smaller farms; it runs the gamut, and fortunately for big agricultural business- the big businesses- urban populations generally don’t have the knowledge of that bill, and yet are affected by it every day.

When it comes to a vote, there’s sort of this trade. Politicians in the Midwest will ask for the vote of the urban lawmakers on the farm bill, which really doesn’t matter too much to people in urban constituents. When it comes time for gun control, let’s say, they’ll trade votes. That’s been the history of deal making in the House and the Senate. It’s been that way because the congressional representatives feel like their constituents aren’t interested. If they show that they’re in fact interested and start holding our lawmakers accountable for these kind of votes, then the outcome of the whole farm bill will be quite different, and that’s what my hope was in writing that op-ed.

Another essay you wrote, in the April 2007 Food Arts, is about the literature of sustainability. You mention Wendell Berry’s The Unsettling of America

, specifically regarding the role of “urban gardeners” and “urban consumers” in how attitudes about agrarianism are formed and policy is made. What role should the New Yorker be playing in terms of its food, which is for the most part produced really far away?
There are a lot of things they can do. You can always write to your congressional representative to say you want greater access to farmer’s markets, which also is covered in the farm bill. You can write to say you want more money for lunch programs in public schools. I think the biggest way to influence the farm bill is to continue to make informed decisions about what we eat, and what we choose to buy. That not only has the ability to perk up the ears of our lawmakers, but also on the marketplace. Over the last half century, New Yorkers have been apathetic and accepting of the food they’ve been eating without asking questions, and we’re beginning to see the effects of this. How food is grown, where it’s coming from, who’s growing it- all of these things have changed more dramatically in the last 30 years than in the last 30,000 years. Those changes have not been benign. We are seeing in the NY metro area an abundance of health care issues- diabetes, obesity. At the same time, we’ve seen a community breakdown just outside of the city of farming communities that were once a part of our landscape- not our immediate landscape, but outside the city, around us in the Hudson Valley and in New Jersey. All of these things can be related back to the choices we’ve been making when we buy food.

I say this is a historic time because the farm bill is coming to a vote in a few weeks. Things can be decided now that will vastly affect not just our food landscape. The farm bill is really a health care bill. It’s a school lunch bill, too. That’s why it’s good to become more conscious about food, because it touches on so many issues.

We had a conversation about Sysco a few months back, and the NY Times panel you were on with [Sysco CEO] Rick Schneiders. You mentioned that Sysco, one of the biggest foodservice companies in the world, might be on the cusp of changing the way it does business.
This relates a little to what we’re talking about. Here’s a big company, a major corporation, that’s looking at its future. Its CEO is saying more and more chefs, and along with that, more and more diners, are demanding food that has some kind of transparency to it. Schneiders’ viewpoint is “hey, we have to do something about this. I don’t have the supply chain to satisfy those chefs and those diners.” This is the flipside of what we’re talking about- a $35 billion company. I think it’s a really interesting development, because what is says is that there is a revolution going on here. With Sysco, a company many people would associate with, you know, the devil, they’re waking up and saying, “hey, hold on- this isn’t good for our future bottom line.” We’re in the middle of a very important time.

You contributed to The Comfort Food Cookbook- do you have a comfort food?
Do I have a favorite comfort food? I don’t even know what “comfort food” really means, to be honest with you. I’ve never understood that. You always pick up these magazines that say things like “return to comfort food.” I have no idea what that means. Why did we ever leave comfortable? Why is food ever uncomfortable? If food is so uncomfortable, then why are people even cooking it? I’m not saying that to be provocative, I just don’t understand it. To go with the flow of what you’re saying, though, I would that I like a good plate of pasta. This time of year, just pasta with some tomato sauce. It’s pretty simple, delicious food. It’s comfortable.

Do you plan on adding any new Blue Hills? Does the work you’re doing with agricultural diversity have an as yet unmatched restaurant format?
The future of Blue Hill isn’t more Blue Hill. It’s more intensification in the farming realm. We want to expand Blue Hill Farm [Barber’s family farm in the Berkshires that supplies many provisions for Manhattan’s Blue Hill restaurant]. We want to become more invested in the agriculture element of what we’re doing. I don’t think we have to build more restaurants to do that. Might there be other projects with the Blue Hill name, sure, but I don’t think we’re going to be doing Blue Hill Vegas anytime in the future.

What’s your favorite spot in NY to grab an after hours bite?
I’ve always loved New York Noodletown, and they’re open late. I used to go to bed a lot later, but I’ve tried to stop doing that.

Any hidden food gems, or really underrated places?
New York Noodletown is one of them. I think it’s one of the best Cantonese restaurants going. I’ll answer your question in the most fucked up way- there probably isn’t a restaurant that gets more praise than Lupa, but I think Lupa is the best restaurant in New York, and it’s not undeserved to lavish praise on it. Now you know where I get my bowl of pasta with tomato sauce.

Do you have a favorite New York City greenmarket?
I’m a Union Square kind of guy, but I love the Grand Army Plaza greenmarket in Brooklyn. I think, though, a secret gem is the upper West Side 97th Street market on Fridays- that’s my secret go-to place that I don’t ever talk about. It’s tiny, but filled with terrific stuff.

Would you ever consider running for some kind of elected office?
What am I going to run for, comptroller? I don’t see it.

That was my trying-to-be-funny, obnoxious question.
It’s not obnoxious. I consider it a compliment, unless you think of me as, like, comptoller or something. I don’t know how well I’d do.

Can you share a strange, “only in New York” story?
I don’t know if it can happen only in New York, maybe only in the New York restaurant industry. This past week, local tomatoes just hit the farmer’s market, so every restaurant in the markets are looking for these things. You wait for them all year, and around this time, you’re just dying for them. I put my order in with this guy early, five cases. When I got to the market last week, he said, “Oh, your guy already picked up.” I said, “I don’t have a guy who picks up for me- I pick up. Joe, I’ve been buying from you for twelve years. What do you mean ‘your guy already picked up?” He said, “Oh my god, you’re kidding me. He signed and said he was from Blue Hill.” Somebody just took the tomatoes and signed my name. That’s the heightened restaurant industry competition in New York for you. I feel that something like this wouldn’t happen in Omaha, Nebraska, but I could be wrong.

For more information about the Farm Bill and its workings, read this essay by Dan Imhoff, the author of Food Fight: The Citizen's Guide to a Food and Farm Bill. For a full listing of upcoming events at Stone Barns Center, go here.