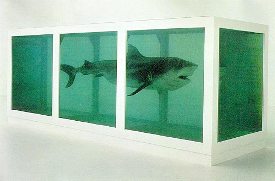 The Physical Impossibility of Death in the Mind of Someone Living, also known as the shark in a tank by British artist Damien Hirst, will be shown at the Metropolitan Museum of Art by Labor Day, according to the NY Times. The artwork, bought by hedge fund billionaire Steve Cohen for $8 million, isn't the exact same one that was exhibited at the Brooklyn Museum of Art's Sensation show in 1999 - the shark has since been replaced, as it started to rot almost immediately (note to conceptual artists thinking about suspending animal carcasses in formaldehyde- the carcasses need to injected with formaldehyde too).

The Met's curator of 19th century, modern and contemporary art Gary Tinterow told the Times he e-mailed Cohen to ask if the Met could show it and Cohen agreed. Cohen's statement: "I am very excited that the piece will be displayed at the Met with other art-historical treasures.” And Tinterow said of showing the shark, "It's big, it’s important and it’s amazingly powerful."

Last year, the Times wrote about the shark replacement; Hirst also said he tried to create the Pieta with cows. And the Discovery Channel's Shark Week starts July 29th.