Real estate kingpin Aby Rosen is already battling people over the Picasso at the Four Seasons restaurant in the Seagram Building, so is it really that surprising that he's got his neighbors in a fancy Long Island town in a tizzy with his Damien Hirst sculpture? Of course, the Hirst sculpture is a 33-foot tall depiction of a woman with an exposed fetus. The mayor of Old Westbury Fred Carillo said, "I think it would be a magnificent piece... at a medical building," like an "OBGYN."

According to Newsday, "Rosen's sculpture sits on a conservation easement on the A. Conger Goodyear House, a 5.5-acre estate built in 1938 and listed in 2003 on the National Register of Historic Places. The village has strict rules regulating easements and prohibiting additions such as plantings or structures... Conservation easements are common in the village, and are designed to preserve the natural topography and protect slopes to ensure proper drainage."

Carillo told Newsday, "It's out of character with the neighborhood. We have to appease the residents, they have to preserve their bucolic views. The question is, does it belong in Old Westbury? Does it belong on a residential property?" 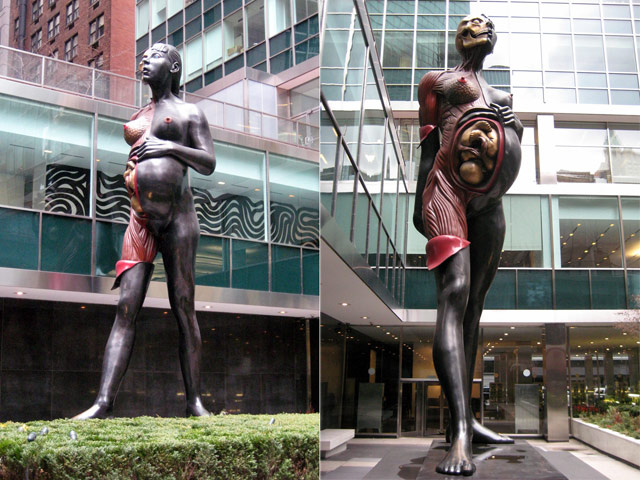 Previously, Rosen displayed the piece at the Lever House in Manhattan. Here's how Hirst's website describes the piece:

‘The Virgin Mother’ is a 33-foot, thirteen-ton bronze sculpture, cast at Pangolin Editions foundry, in Gloucester. The work, which Hirst has rendered in a variety of different editions, can be considered a female version to Hirst’s monumental ‘Hymn’ (1999-2005). This first edition includes a painted anatomical cross section. The figure’s stance recalls Edgar Degas’s ‘Little Dancer of Fourteen Years’ (c.1881). Hirst explains the significance of the reference to Degas: “It is kind of naughty; she shouldn't really be pregnant. I wanted a feeling of that. Anyone who is pregnant looks old enough, that's the problem.

Right now, the piece is covered with mesh; Rosen's landscape architect David Kelly told 1010 WINS that they did "so that no one’s feelings are hurt. We don’t want to be insensitive."