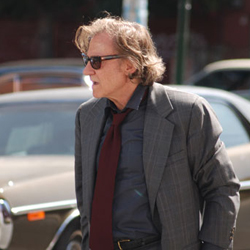 You may have heard something about that TV show Life on Mars. Based on the BBC show, it tells the story of present-day NYPD Detective Sam Tyler (Jason O'Mara) who wakes up in 1973 after a car accident and has to adapt to 1970s policing techniques, as exemplified by Harvey Keitel. To promote tonight's premiere of the series, The Daily News has dug up a bunch of stories from 1973 is hosting them on a website mocked up to look like an old, faded copy of the paper.

Hey, a tabloid's gotta eat. And as far as shameless advertising gimmicks go, this one's not bad; there are fun features on the mob bosses of the day, and resurrected stories from sections ranging from Lifestyle to Sports. A city employee and three others busted with $100,000 in cocaine! A 17-year-old kid disarmed a gun-wielding man at a Queens playground! Half a million hippies rock out to the Dead upstate at Watkins Glen!

There's a lot of juicy stuff to sift through as you kill time before Life on Mars, and not to be outdone, the Post also gets into the TV premiere spirit by looking back at the most "sensational crimes" of the era, just before Rupert Murdoch bought the then-liberal tabloid. And note to Hollywood—Gothamist stories date all the way back to 2003!

Photo of Harvey Keitel on set of Life on Mars by Toby von Meistersinger.

#abc
#daily news
#fiming
#Harvey Keitel
#Jason O'Mara
#Life on Mars
#televison
#williamsburg
Do you know the scoop? Comment below or Send us a Tip