Here's how the Luna Park website boasts of the famous attraction, the "Big Momma" of Coney Island, the Cyclone: "Get ready to shake, rattle, rumble and roll over 2,640 feet of track featuring 12 drops and 27 elevation changes that still has the stuff to take your breath away. Slowly rise to panoramic heights and grip the bar tight as you go over the ledge on an exhilarating 85-foot, 60-degree plunge at speeds of 60 mph." But on Saturday afternoon, after climbing 85 feet and slightly dipping, riders experienced a different sort of exhilaration when the roller coaster ground to halt.

“The Cyclone Roller Coaster temporarily lost power today due to an electrical issue and the cars slowed to a stop on the track. Cyclone personnel safely guided guests from the cars without incident. Power has been restored and inspectors have inspected the ride to certify that everything is fully safe and operational. The Cyclone is running and open for guests,” a Luna Park spokesperson said in a statement to CBS NewYork. The statement did not mention whether any guests boarded the cyclone after the incident.

Summer Guan, 29, was sitting in the fourth or fifth row of the Cyclone with her boyfriend when it suddenly stopped, after climbing to the peak. She told Gothamist that around 10 minutes after the ride stopped, staff started climbing up and evacuating the riders, but would not tell them what had happened. She estimates that there were between 12 and 20 passengers, including young children. "The kids were having trouble getting onto the tracks," said Guan.

The staff brought each person over onto the outside wooden steps and walked them down. "The staff was holding hands with me as I was climbing down," said Guan, who had to descend in flip flops. "It was a crazy hot day." 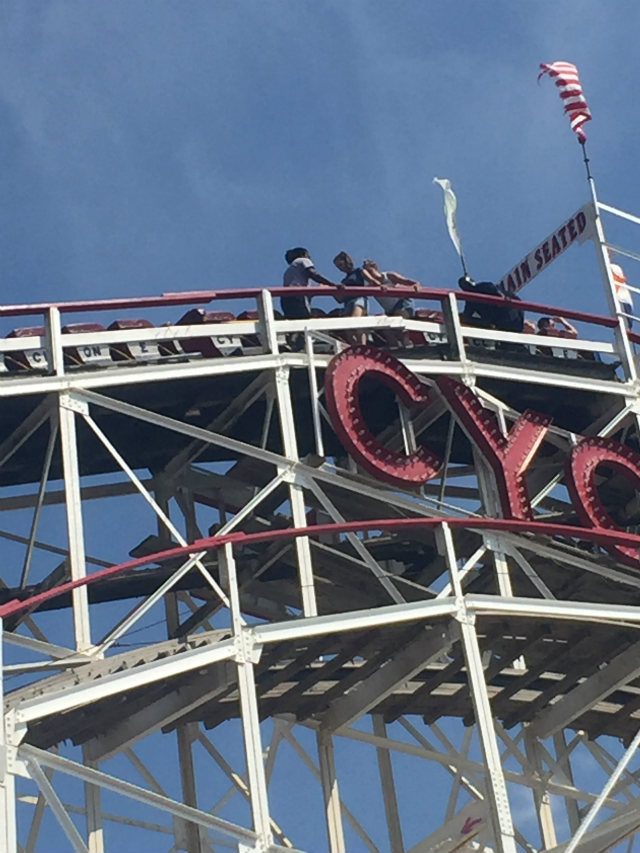 Guan said that even after they got down, Cyclone staffers refused to explain what happened. Since then, Guan said she has contacted Luna Park twice and emailed them to try and get a refund, but has not heard back. She and her boyfriend had bought day passes for $51 each.

Asked if she would continue to ride roller coasters, Guan said she would, but probably not the Cyclone. Should be fine.