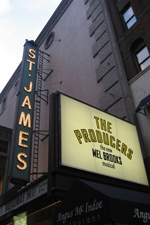 Both the League of American Theater Producers and Owners and Local One, the stagehands union have put their final offers for a contract agreement on the table. Distance between the two offers could mean that almost all Broadway shows will go dark in the near future. According to The New York Times there are no more negotiating sessions scheduled, so a lockout by the producers and owners looks likely. If that happens, only four shows will continue to stage performances: “Mary Poppins,” “Pygmalion,” “Mauritius” and “The Ritz."

At issue are work rules that dictate how many stagehands are needed for a show's production and for how long. The producers would like some flexibility during their shows' expensive load-in periods. A show's load-in period is when equipment and sets are being loaded into a theater. Producers must determine how many stagehands they'll need and all of those employees are paid for the entire period, regardless of whether they're working or needed.

Local One says that it is unwilling to make costly concessions without some additional benefits. If the lockout goes through, and it could start immediately, it will be the second stoppage of Broadway shows in the last five years. The most recent one lasted four days in 2003.