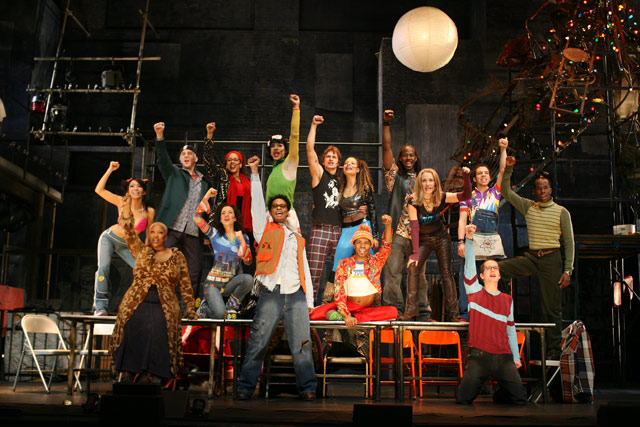 After twelve years, 5,124 performances and a haul of $280 million, Rent's Broadway run has come to an end. The musical closed yesterday after a final sold-out performance packed with diehard fans (the "Rentheads") and a smattering of celebrities (a couple Gossip Girl cast members). Just before the curtain came down for the final time, members of the show's original company joined the current cast on stage to "Seasons of Love," one of the show's most famous songs, the Associated Press reports.

So this morning countless theatergoers woke up to find an empty void where the pop musical once jingled, and theater editors labored to come up with clever headlines about the show's lease ending. But though producers chose to evict Rent from Broadway's Nederlander theater, the musical will live on in productions around the world and in another national tour that starts in January.

There was also a High-Definition video shot by Sony Pictures during the musical's last performances which will be screened in movie theaters across the U.S. toward the end of the month. (Details.) Allan S. Gordon, one of the show's producers, told the AP, "Rent is recorded for history, so it's not like it's disappearing off the map... Hmmm, maybe I should bring back a revival next year." The Times has a photo gallery from Rent's last night.