Over the weekend, flyers began appearing around Astoria with the heading "Gangsta Cat Seeks Homey 4 Life."

The full text, in case you can't make it out, is this:

I may not look like it, but I am one badass mother f*cker. I only accept petting when I feel like it. If you try to pet me when I'm not in the mood, I will hiss at a bitch. Because f*ck you, I do what I want.

You would too if you had it rough like me. My punk ass family abandoned me outside in subzero degree weather in a cat carrier, and then the animal shelter that was supposed to find me a home sent me to death row. I was saved by a nice cat rescue and am now kicking it at my foster home. But no one will adopt me because whenever I meet new people and they pet me, I hiss at them. I'm also old as hell (9 years). In cat years that's way too old for any of this bullsh*t, so you'll just have to understand why I'm a cranky old man.

Not cuddly enough for you? Then move along, son. There must be someone in all of New York who will appreciate a badass (and okay, sometimes sweet) cat who does not give a f*ck. Call my foster mom Rose at 646-XXX-XXXX if you want me to grace your couch with my little orange nutsack. Peace.

Were the flyer advertising a new environmentally friendly cat spa, we'd file it under "Terrible PR Stunt," but in this case the cause is righteous and the delivery mechanism does the job. Here we have an aging, antisocial cat in need of a home, and what better way to find him one than to place his prickly personality front and center and make it a cause for sympathy? We reached out to Rose Hilliard for some background on, among other things, that nutsack.

Hilliard edits romance novels for a living. In her off hours, she fosters cats that the organization Anjellicle Cats rescues from the kill list at animal shelters in New York. Hilliard said that Oliver Julius, or OJ, was dumped by his previous owners in East Harlem on a cold day in March. Anjellicle pulled OJ from a shelter there, and Hilliard has been housing the mouser for a little more than a month.

Hilliard said she took OJ to an adoption event, and that she tried a more conventional flyer. But so far, he has hissed at all of his suitors, and they have kept their distance. What OJ needs, Hilliards thinks, is true understanding.

"Nobody will adopt him because he's got a bad attitude," she said. "It's very obvious. He needs somebody who will accept him for who he is." 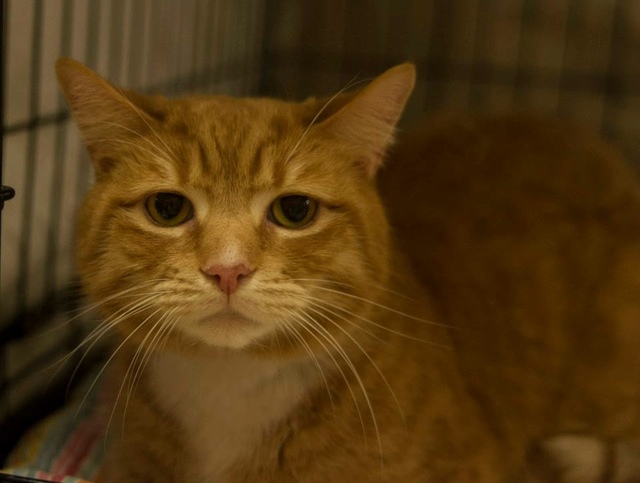 Can I live? (Lisa Douglas)

Hilliard noted that the cat hisses at her sometimes, but that "when he's in the mood he can be very loving."

When asked to explain the slightly jarring appearance of OJ's scrotum at the end of her pitch, Hilliard said that the cat is fixed, but that he does enjoy licking what's left of his junk on her couch. How normal is that?

At issue is not so much OJ's toughness or underworld acumen, but his attitude, which is that of many an old man who has lived in New York for too long. What's not to love?

People who are seriously interested in adopting OJ should email rose8787@gmail.com.