While only two airlines fly from New York to Santa Fe—and that's with a connection—you know it's worth the journey as soon as you step off the plane into an airport that is the antithesis of Laguardia or JFK or Newark. The Santa Fe Municipal Airport is an adorable, pocket-sized adobe airport with about three different areas and feels like it was smaller than the Starbucks at Astor Place. That's how you know you're Out West. 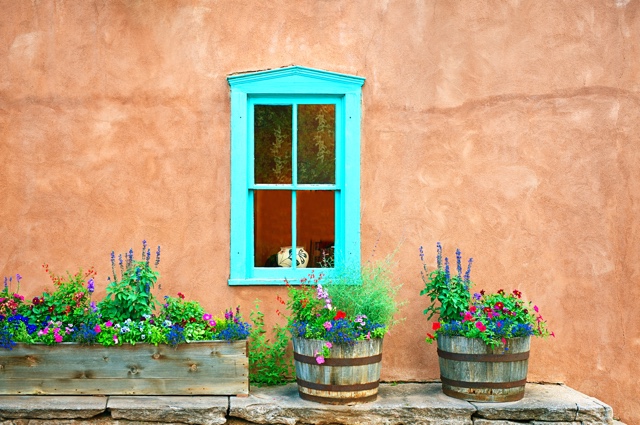 Santa Fe is a great destination: There's hundreds of years of history, rich culture, amazing food, stunning scenery, terrific hikes, and more. And it's not so huge that you'll feel overwhelmed with choices if you're there for a short stay... but may want to plan a return trip.

If you're planning a longer trip out West, whether for a road trip or you just want to be somewhere totally unlike New York, definitely consider these things.

Across from the Plaza, the Palace of Governors, a Registered National Historic Landmark which is apparently the oldest continuously used public building in the United States (it was originally the seat of the local Spanish government in the 17th century), serves as the state's history museum. Native American artisans also sell their wares outside the Palace—bring cash, though some vendors take credit cards. 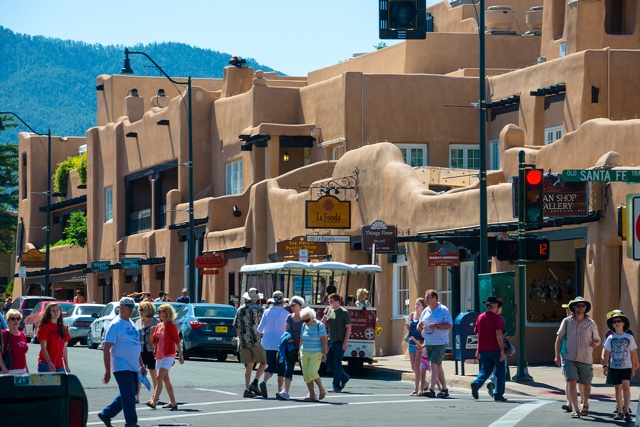 There are a few museums nearby, including the New Mexico Museum of Art and the Georgia O'Keeffe Museum. You can also book a tour of O'Keeffe's studio in Abiquiu, about 60 miles from Santa Fe.

Also off the Plaza is the Loretto Chapel, a beautiful 19th century former Roman Catholic Church that features a stunning staircase that was built with some divine intervention. According to the chapel's website:

"Legend says that to find a solution to the seating problem, the Sisters of the Chapel made a novena to St. Joseph, the patron saint of carpenters. On the ninth and final day of prayer, a man appeared at the Chapel with a donkey and a toolbox looking for work. Months later, the elegant circular staircase was completed, and the carpenter disappeared without pay or thanks. After searching for the man (an ad even ran in the local newspaper) and finding no trace of him, some concluded that he was St. Joseph himself, having come in answer to the sisters' prayers. The stairway's carpenter, whoever he was, built a magnificent structure. The design was innovative for the time and some of the design considerations still perplex experts today.

Then, there are countless crafts stores, boutiques, and galleries to check out—Canyon Road has over a hundred! Either under-pack or bring another bag for your souvenirs. If you go in August, it's the big Santa Fe Indian Market, with 1,000 of the "best of the best" Native artists, craftspersons, and designers on August 19 and 20 of this year. 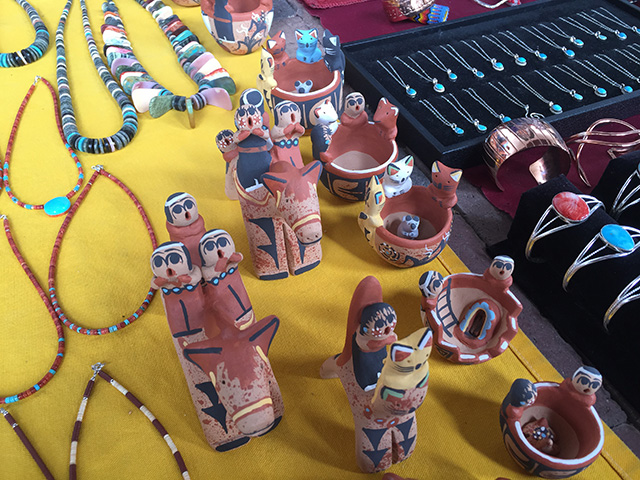 Yes, the Game of Thrones author bought and renovated an old bowling alley for a permanent art installation, which is called Meow Wolf. The venue describes itself as "a combination of jungle gym, haunted house, children’s museum and immersive art exhibit." io9 called it the "craziest funhouse."

Its centerpiece is the House of Eternal Return—"a unique art experience featuring a wild new form of non-linear storytelling which unfolds through exploration, discovery and 21st century interactivity. The premise: Something has happened inside a mysterious Victorian house that has dissolved the nature of time and space. Venture through the house of The Selig Family, and discover secret passageways into fantastic dimensions!" 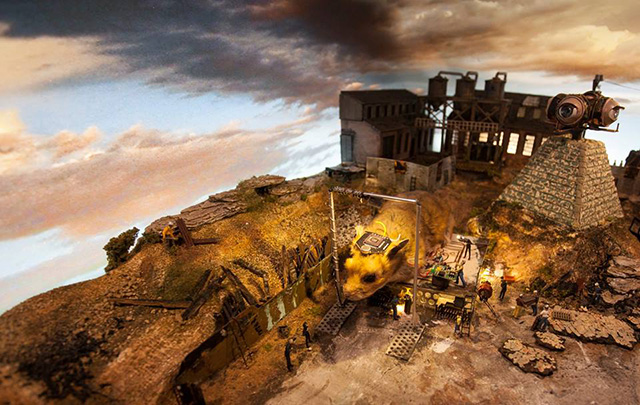 It's closed between January 17 and January 31 for upgrades, probably to get ready for more hands-on "snooping."

Do not miss the Kasha-Katuwe Tent Rocks National Monument. Situated on the Pajarito Plateau, with ranges from 5,570 feet to 6,760 feet, there's hiking, bird watching, and copious opportunities to simply admire nature. 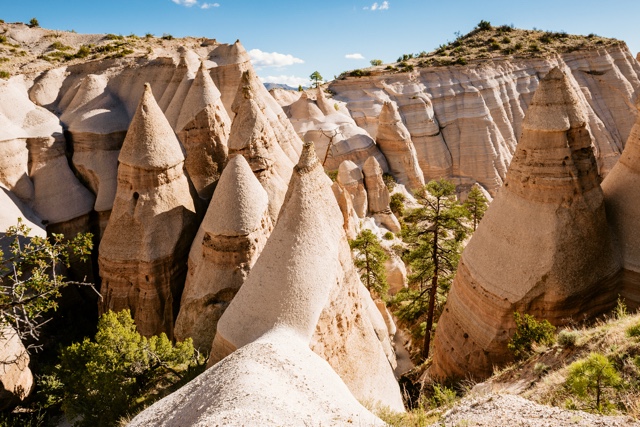 According to the Bureau of Land Management, "The cone-shaped tent rock formations are the products of volcanic eruptions that occurred 6 to 7 million years ago and left pumice, ash, and tuff deposits over 1,000 feet thick. Tremendous explosions from the Jemez volcanic field spewed pyroclasts (rock fragments), while searing hot gases blasted down slopes in an incandescent avalanche called a 'pyroclastic flow.' Precariously perched on many of the tapering hoodoos are boulder caps that protect the softer pumice and tuff below. Some tents have lost their hard, resistant caprocks, and are disintegrating. While fairly uniform in shape, the tent rock formations vary in height from a few feet up to 90 feet."

There are also other trails to explore around Santa Fe, like the Winsor Trail and the Aspen Vista Trail in the Sangre de Cristo Mountains.

New Mexico is famous for their Hatch chile peppers (there's a festival after all), and Santa Fe's speciality is green chile. Give your diet a kick by having some at least a few times—The Shed, The Pantry, El Parasol, Santa Fe Bite, and Tia Sophia's are but a few of the many eateries offering the dish. Also helpful: Eater's primer (with lexicon) to green chili in Santa Fe and Foursquare's list of the best places to try green chili.

To buy chile peppers, just look around or ask a local! The Santa Fe Farmer's Market is on Saturdays. 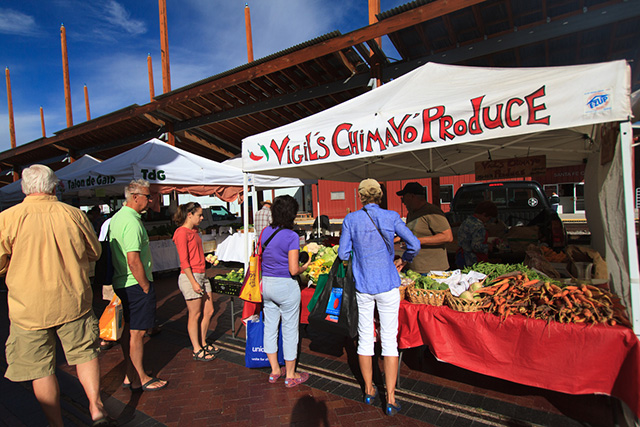 If you're looking for a more upscale dining option, Restaurant Martin has a modern American menu and a beautiful outdoor seating area. Coyote Cafe is another fancier restaurant, but during the summer, there's a more casual rooftop cantina.

There are a number of hotels located in the heart of Santa Fe—the Inn of the Governors, the Eldorado Hotel, the Inn of Five Graces, Inn and Spa at Loretto, the Hotel St. Francis to name a few—but you can also go the Airbnb route if you want more room to spread out. 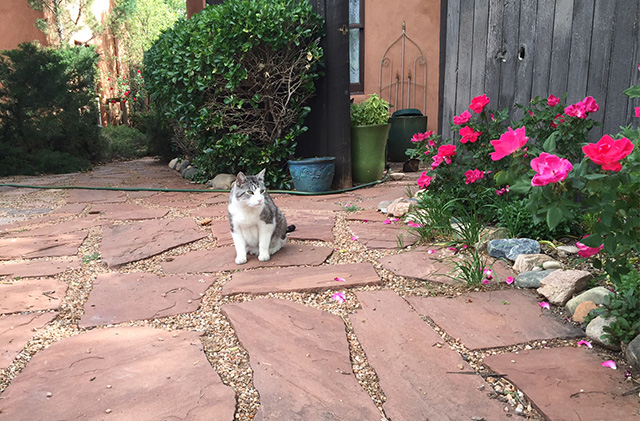 I stayed in an adobe house, via Airbnb, which allowed me to see charming residential architecture on the off-streets. I admit to making the rookie mistake of being a New Yorker and assuming I could just walk everywhere because it seemed so close on Google Maps (some sidewalks to downtown Santa Fe were narrow from the home; walking back from Whole Foods with groceries was tricky but doable) and would recommend renting a car, especially if you want to visit more of Santa Fe outside of the downtown area—like seeing authentic pueblos—and experience nature. If you insist on being car-less, Uber worked well for me.

The altitude is 7,000 feet—so keeping hydrated is a must, especially in its dry climate. Avoiding strenuous activity, like hiking, is probably a good idea for the first day or two. Santa Fe's tourism board recommends you watch your alcohol intake as well, "One drink is the equivalent of three at sea level."

It's sunny 320 days of the year. Wear sunblock.

#gothamist getaways
#new mexico
#santa fe
#travel
#original
Do you know the scoop? Comment below or Send us a Tip