We are in the Banksy-created rabbit hole, wondering when he'll reveal his next piece in his month-long NYC "residency". And we're still debating whether his latest stencil is authentic. Which is why we've created this GIF.

In this mesmerizing GIF, you'll see the 800 phone number appear on the right part of the sidewalk.

When we first received this photograph of the dog peeing on the hydrant image on West 24th Street, we didn't think it was Banksy, but who knew? However, unlike his earlier Allen Street, there was no 800 number near the piece. (The 800 number, 800-656-4271, is the audio guide to his show.) This image below was taken by David. K at 1 p.m. 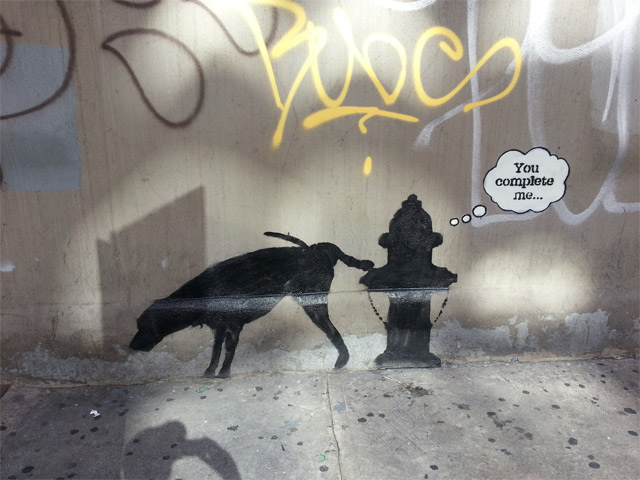 David K. tells us today, "I did not notice a toll free number on the sidewalk. Now that I think about it, there was a guy loudly telling everyone at the 25th/10th site about the new 'Banksy' on 6th and 24th, giving very specific directions as well. I'm wondering if it is a fake, could this be the culprit." 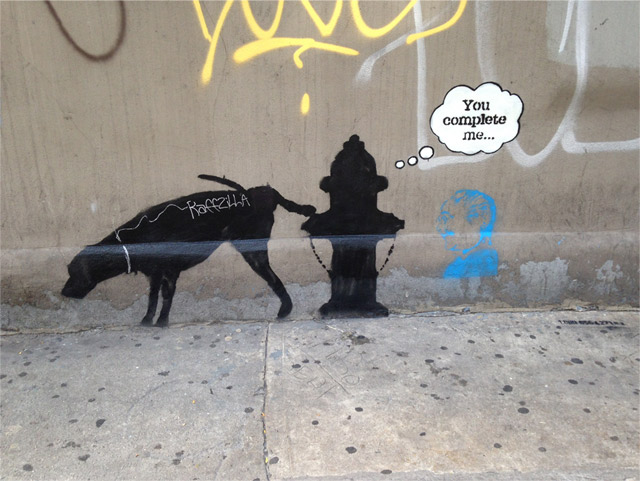 Of course, by the evening, there was an 800 number (one reader sent a photograph of it at 9:57 p.m.) and the recording does refer to an image dog peeing on a hydrant. And then this morning, Banksy claimed it on his official Instagram:

Still, one hypothesis is that Banksy is taking credit for a Fakesy. Why is this so important? It's not hugely important— href="http://gothamist.com/2004/03/25/law_order_gothamist_intent.php">we just like playing detective, okay?

#800 number
#banksy
#banksy ny
#better out than in
#dog peeing on hydrant
Do you know the scoop? Comment below or Send us a Tip