Crystal Tompkins (right) and her wife Lindsey Evans (left) have combined their talents as writer and illustrator to create a children's book about same-sex marriages. Oh The Things Mommies Do! What Could Be Better Than Having Two? is aimed towards young children growing up with two moms—something the couple created after realizing the lack of children's books covering the subject of LGBT families. It will hit bookshelves later this month, and Tompkins recently told us a little bit about it.

What inspired you to put this book out? My wife and I have really been considering starting a family, and both of us being avid readers, couldn't help but wonder what we would read to our children. After many hours of searching, we realized that there are only a handful of children's book geared toward LGBT families. So, we decided to contribute by writing our own.

This one is for ages 1-5, will you be making more for older age groups? We do have some idea in the works for other books that will be for the same age group, and would certainly consider making some for older children in the future.

Are there any other upcoming projects you have in mind that have to do with this same subject? What's next? We would love to do a follow up for the Daddy counter parts and possibly a book dealing with Gay and Lesbian adoption. For now, we're just trying to stay focused on “Oh The Things Mommies Do!” and making it available to two-mom families everywhere.

What do you feel the biggest challenge is for children being raised in "alternative" ways, and for the parents raising them? Unfortunately, I would have to say the lack of education and understanding of the Gay community. While we may not see that as much here in New York (or other major/progressive cities), it is still pretty tough for LGBT families living in more rural communities. Since we started promoting the book, we have received letters from all over the country from families that have to deal with issues like, Child Services trying to take their children from them because they see their lifestyle as immoral and harmful to their children. Its outrageous. As far as we have come, there is still quite a way to go. 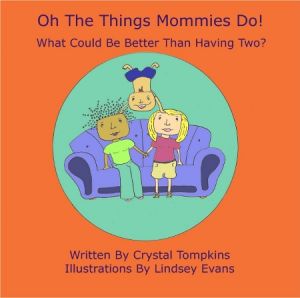 Where will the book be made available? Would it be possible to have it in schools so that every child can become familiar with the idea of same-sex parents? The book will officially be launched on Amazon.com within the next couple of weeks, and is now available to purchase through our website. We have been in contact with many independent book stores through out the country, and hope to have books placed on shelves in the very near future. The book was written more for LGBT families themselves, but if schools are open to including it, we would love to have it used as an educational tool.

Please share your strangest "only in New York" story. My favorite “only in New York” story of all time was a few years ago when a friend of mine, who had never really spent any time in NY, and I had taken a bus trip into the city. When we walked out of Port Authority we noticed a young man walking down the street listening to his headphones and bopping his head. He wasn't paying attention and ran right into a little old woman, who had to have been at least 75 years old, and kept walking as if nothing happened. The old woman started screaming, “Yooouuurrr Stuuupid!” She ran down the street after the young man, and started smacking him with her purse! The poor guy had no idea what was going on.

Which New Yorker do you most admire? I live in Hell's Kitchen, and the New Yorker I admire most hands down is the woman that runs the thrift shop on my block. She has been here in the neighborhood, running the same shop for decades. She knew the neighborhood when it was a terrible seedy place to be, and now that it's hip and trendy. Always pleasant, with a great story, she's just the New Yorker you want to know.

Given the opportunity, how would you change New York? Honestly, there aren't many things I would change about New York. If I could, I would maybe have someone sweep it up a little more often.

Under what circumstance have you thought about leaving New York? I don't think I would leave New York, but I have thought about moving out to one of the other boroughs. I have two dogs, and it would be really nice for all of us to have more than 450 square feet and possibly some outdoor space.

Do you have a favorite New York celebrity sighting or encounter? When my wife and I came to search for apartments, we weren't exactly sure what part of town we wanted to live in. We ran into Nathan Lane at the coffee shop around the corner, and figured Hell's Kitchen was right up our alley. We signed a lease the next day.

What's your current soundtrack? I have really been digging Bon Iver's album “For Emma Forever Ago” and most everything by Santigold.

Best cheap eat in the city. Super Taco on 96th and Broadway—their Tostadas are amazing!

Best venue to hear music. I really like a good cozy dive with some history, so I'm going to have to say The Bitter End. I also like Terminal Five for a bigger venue.