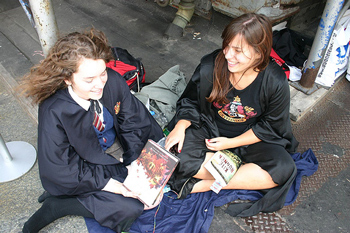 Chelsea Logan and Leah Wickman are two recent high school grads from California, who travelled across the country to New York City to be the first in line to purchase the final volume of J.K. Rowlings' Harry Potter series, Harry Potter and the Deathly Hallows. The Daily News talked to the two girls a day after they purchased their books. They identify themselves as part of a parallel Potter Generation.

The teens first dreamed up the trip six years ago. After all, they grew up with Harry, his pals Ron and Hermione, and the rest of the Hogwarts crew.

"We were 8 years old when the first book came out, and [the characters] were 11," said Logan. "Now we're the same age. They're ending school, and we just ended school. So it's definitely parallel."

"It's kind of like our graduation from Harry Potter," Wickman explained, "and this is the biggest party."

After waiting in line for 16-and-a-half hours, finally getting their hands on the book, and posing for photos with Scholastic CEO Dick Robinson, the two teens went back to their hotel, where they spent the night reading the 757 page novel before falling asleep at 6 am. After a quick four-hour nap, they were back to the book and by mid-afternoon on Saturday they were at the halfway point and enjoying it. They planned to finish their reading while in Central Park yesterday afternoon, although they admitted that were reading slower than usual to savor the experience.