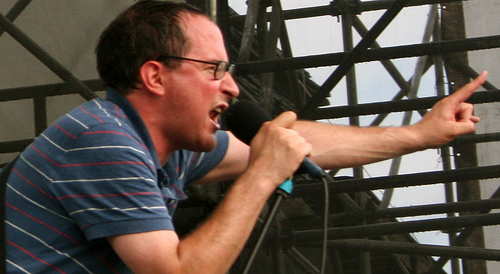 People tend to either love The Hold Steady or hate them, but even those in the latter camp don't really despise them in a 30 Seconds to Mars sort of way. Say what you want about frontman Craig Finn's half-spoken/half-sung vocalizations, it's hard to knock a group with such an affable lack of pretension. A couple years after the dissolution of his previous band Lifter Puller, Finn started The Hold Steady in 2002 with no greater ambition than to gig locally and bring the joy back to making music. Four albums and countless touring miles later (last summer they opened for the Rolling Stones), the band has still managed to preserve that casual yet exuberant spirit that's proven so infectious. Full length number four, Stay Positive, hit stores on Monday; we recently spoke with Finn about the album, the fans and the blogs.

What can you tell us about your inspiration for the songs on your new album? Well, one of the big things was when, pretty early in the recording, I found my roommate’s John Cassavetes box set and I watched all of them. But Opening Night in particular really hit me and filtered into the songs, not just the last song but the whole record. It deals with the idea of getting older and also being a public figure. You know, we’re far from a household name but even with the limited success of our records I’ve become more aware of what it means to go out and what it feels like when people know who you are and how it makes you react in situations.

Yeah, do you live in Greenpoint? Because I keep seeing you at Brooklyn Label. All the time. Yeah, every day.

So is it getting harder to go about your business without having to stop and chat every twenty feet? It’s not really that, it’s more like if you’re having a fight with your girlfriend you suddenly think, “Wait a minute – this guy at the next table might be listening and be a complete asshole.”

And it could already be on his blog before you even get the check. Yeah, that’s the thing. I came home from Baltimore; we had some shows and she was like, “Did you go to a bar last night?” And I said, “Yeah, I was in the hotel bar.” And she’s like, “Did you go in at 1 a.m. and leave thirty minutes later?” And I said, “Yeah.” And she goes, “I know; I read about it on a blog.” [Laughs.] I was very well-behaved, but it’s obvious that things will get reported right away.

Other than that, what’s your take on how blogging is influencing how music is experienced these days? There is a negative to it; our record was leaked and there’s this culture of wanting to be first. First to hear it, first to review it. Which is where the leak comes from. There is, I think, some amount of journalistic integrity that gets lost and people are more likely to tell a good story on a blog even if it’s not true, in the interest of being entertaining.

Has that happened to you? Yeah, people point out blogs that report me being in a bar really wasted when I wasn’t drinking. It just sounds better if I’m really wasted.

The new album is called Stay Positive. How did you settle on that title? You know, it was something that arose out of my constant surprise when people ask me for my autograph. I always write ‘Stay Positive’ in my autographs, and it stuck with me from writing it a bunch of times. I came up with a song of the same name, and once I worked on that I kind of had it pretty early on in the record’s genesis.

Friends of mine were at your show at McCarren pool and they told me they met a couple wearing “Stay Posi” T-shirts. Yeah, that’s something that came from my autograph and they made those shirts.

Apparently this couple met on a Hold Steady message board and they’re going to get married. Do you know of any other love connections people have made through The Hold Steady? I can see them happening from the stage. I don’t go to the message board because I don’t think it would be healthy for me. But I have met some people who have met through our shows. I met one couple at that McCarren pool show who met at our show in Milwaukee – I don’t know if that’s the same couple you’re talking about but if they’re going to get married they only met like six weeks ago.

Do you get requests to play at weddings? Someone was saying there’s a blog or website or something requesting that we play at their wedding. I think it’s just a matter of expenses and timing; we have nothing against playing weddings but it just has to meet the financial demands of our show.

I read that you introduced the title track on the album, Stay Positive, at a show as “owing a vibe to D.C. hardcore when it was good.” Yeah, when I was growing up in the late ‘80s I was really into hardcore, especially the east coast stuff from D.C. and New York and Boston. There’s a lot of positivity in those old hardcore songs and our song kind of reminds me of that.

Your bandmate Tad told Rolling Stone that “some bands release five records that all sound similar. We've tried to avoid that.” What do you think Stay Positive is doing differently? It’s funny; that’s Tad’s comment and definitely not mine because I think it’s a Hold Steady record first and foremost. But every time we do a record we do try and make it a little more musical and I think on this one I’m singing a little better. And there’s different instrumentation; there’s harpsichord and some strings and horn arrangements. But mostly I think it’s just playing together better and evolving into a more musical group.

You’re at the start of a long summer tour. Do you like life on the road? I really do; I really like to travel. We’re about to go to England and it’s always fun to go overseas. The shows have gotten bigger and we’ve been able to get a tour bus and it’s gotten easier. At the same time, at my age – I’m 36 – I spend a lot of time on the road just trying to stay healthy.

One review of Stay Positive said that some of the lyrics are darker, but they also emphasize not letting this heavy stuff get you down. Is that something you’re conscious of? Yeah, the record’s a lot about aging gracefully and I think when you get deeper into adulthood and have more adult problems and family stuff or marriage, divorce or birth – any of these kinds of bigger life things put you in danger of losing some of that exuberance and positivity of youth. And so I think the record is really about maintaining that hope and optimism in the face of bigger events.

Has any Hold Steady music been licensed for commercials? We’ve done stuff for video games and movies but I don’t know if we’ve ever done an advertisement. It’s not anything we’re nervous about; in this day and age it’s kind of a necessary thing for musicians to think of different angles to get music out there as well as be compensated for it. But I don’t think we’ve had any real serious inquiries from advertisers.

What’s the most memorable fan interaction you’ve had? Most recently there was someone in Belfast who wanted me to call his friend and talk to him. But he did it in kind of a creepy way; he was waiting out back by the bus and when I came out he kind of came right at me. He was really drunk and I decided I should get away, and when I tried to get around him he grabbed onto me. I slipped away, but he ended up pounding on the side of the bus for like twenty minutes. And it’s too bad because often the worst interactions with fans are the people who are most excited about the show. It just gets away from them.

Are there any musicians you’d like to meet who you haven’t yet? There are a lot of people I would love to meet. Neil Young would be a big one. We met Bruce Springsteen already; that was the first. But Neil Young is someone I’d be very interested just to talk to.

What are you listening to these days? The new My Morning Jacket record is probably the one I’ve been listening to most this week. That’s probably number one. The other stuff is mainly new rock; a lot of the bands we play with. But the more touring we do the more I tend to value quiet time.

#Craig Finn
#hold steady
#interview
#stay positive
Do you know the scoop? Send us a Tip