Courtney B. Vance is currently starring on Broadway in the Nora Ephron play Lucky Guy, for which he's up for a Tony Award for Best Featured Actor. The play is a love-letter, of sorts, to the tabloid papers that cover a corrupt and crime-ridden New York. Vance plays Hap Harrison, the long-time editor of Tom Hank's character Mike McAlary, a Pulitzer Prize-winning journalist, in a story that follows the triumphs and turmoil of his life and career.

Vance has been acting since 1987, when he made his Broadway debut, and has been a regular on Law and Order: Criminal Intent. We recently spoke to him about working with Tom Hanks, acting in our favorite movie Space Cowboys, and how it feels to be back on Broadway after an extended break.

After the cast had taken a bow, I saw you and Tom Hanks walk off and there was a little embrace you two had as the curtain fell. Had you worked with him previously? How did your relationship develop as the show went on? We hadn't worked together before. We had met before, maybe at a reading or something; I can't quite remember what. But it just developed through the rehearsal process. I had been on Broadway twice before and had done a lot of long-runs. He had never been on Broadway so I think he just sort of gravitated toward me.

And, of course, our characters had a lot to do with each other so we had plenty of time to chit-chat. As we both got nominated for Tonys—I had been nominated twice before—I've been able to help him navigate it. We talk a lot about conserving your energy. The Broadway life is that you've got another show, and another audience, the next day. So you get back to the business of figuring out how you give every audience the wonderful show that they expect to see.

Your character, Hap Harrison, in the show is certainly a stabilizing force for [Tom Hanks's character] Mike McAlary in the show. For the audience as well, Hap is distinguished as a reliable and critical narrator within the larger chorus. Tom Hanks was very close with Nora Ephron, so not only were you guiding him through his first Broadway experience but dealing with a very real emotional experience as well. Right. I didn't know her at all. My only connection with her was when we did the reading a year and a half ago. So I didn't have a chance to experience what he experienced with her over time. I wasn't able to help him with that. But as he was doing his own grieving with that, I'm sure the play has been a cathartic kind of experience for him.

To be able to say hello, say goodbye, and 'see you soon' kind of thing to her. The life from the outside appears to be very glamorous, being on Broadway, "The Great White Way," but it is very grueling. And the reality of it is you don't make much money. And it's a marathon. And you've gotta know how to navigate it. And then when you take less of your personal time away when you're blessed to be able to be nominated you have even less time for yourself. So you really have to know exactly... it's like hitting a tuning fork. You have to know what your note is to give no more, and certainly no less, than what it takes to give a performance that is what the director set up and set out for us to do.

So you had a reading with everyone including Nora Ephron a year and half ago? Yes. It was a different cast. We worked for about four or five days and then did the presentation, so I had the chance to work with her a little bit there. But other than that I, just as we all have, loved her from afar. 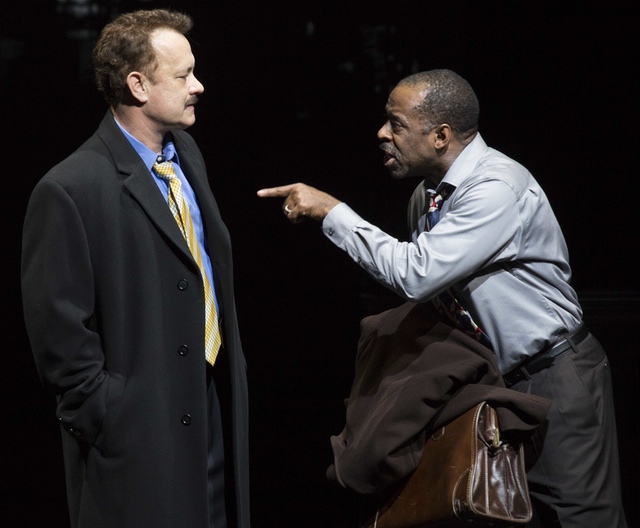 How did you prepare for the role of Hap Harrison? Did you do any research I wish I could have done some research, but there was none to have been done. There was nothing on him. It's very very sad. That's my one hope from doing the piece, that people learn about him. Maybe some more information will become available online. You Google'd him you couldn't find anything. I wish I was able to do a lot of research. I wasn't. It was very sad.

Were you living in New York at the time of Abner Louima case? Do you have any relocation of that or any of the other historical events covered in Lucky Guy? I was here doing theater on Broadway. So I was just jammed doing that. I don't remember a lot of those tabloid cases. I remember hearing about them but I didn't delve too deeply into them. I was dealing with life. Literally, I was really blessed to be on stage all the time in those 7 years after I graduated from drama school. And so much so that I really burned out and that's when I moved to L.A.

And that's when you did more film work, right? You were in Space Cowboys during that time—that must have been an interested experience working with actors like Clint Eastwood and Tommy Lee Jones. Just to see the way Clint Eastwood works as opposed to other directors—I can see why other people love to work with him. Because we're in by 6 and we're out by 6. There's no bells, no "Cut," no "Action," just "You ready? Okay." You get one or two takes at it and everybody's prepared because they know you only get one or two takes. He has a completely, wonderfully different take on filmmaking, which is rehearse the heck out of and shoot it a couple times and let's go. Because at the end of the day he is getting back on his helicopter and he's going back up to Carmel to his family.

Your wife [Angela Bassett] was most recently in The Mountaintop on Broadway with Samuel L. Jackson. You both seem to have a real affinity and love for the theater. Had you ever thought about doing theater together? We had done a big play at the Guthrie Theater [in Minneapolis, Minnesota] in the summer of 2005. A 200-page John Guare adaptation of the movie His Girl Friday and the play The Front Page. So we have worked together on stage and it's exhausting. The children weren't here at that point so it would be hard for us to do it both at the same time now, because there would be no one to watch the children. I'm sure she'll be due to come back. I was really saddened that they came on Broadway in the fall because most plays that will be up for Tony nominations usually come in March and April. So it was really sad that all that wonderful work she did wasn't recognized.

You made your debut on Broadway in the 1987 production of Fences. You started out on Broadway, then took your break and came back. Have you noticed any changes or differences in Broadway specifically or theater in general between now and then? The biggest change is that it's very difficult for new plays to come to Broadway. Lloyd Richard's had set up the whole journey from the regional theaters and they would be workshopped in the regional theaters and then they would come into Broadway. It's very rare to see a new play come onto Broadway because nobody wants to do the journey around the regional theaters. So consequently there's just a lot of revivals.

That's why this one is a very rare thing. That there's a new play coming to Broadway. We had an opportunity to have a month of previews to figure out what the play is. It's very, very different landscape nowadays. Nobody wants to pay for the development of a play. And it takes time; it takes time to marinate. If anything, that's the biggest change.

#courtney b vance
#interviews
#lucky guy
#theater
#original
Do you know the scoop? Comment below or Send us a Tip