Couric Puts Her (Sweet)Heart on Her Sleeve 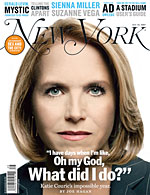 New York magazine has a big cover feature on Katie Couric, aka America's Sweetheart...at least, she used to be. The feature by Joe Hagan is at times a Couric confessional, complaint-fest, and call to arms (literally - she apparently "slapped" a news editor on the arm for using the word "sputum") that looks at the much ballyhooed move from the Today show to the storied news ground of CBS where her evening news program is in third place.

One big admission Couric makes is that the job didn't end up being something she'd necessarily take today. With an original goal of creating something between "The Naked News, a British TV show in which beautiful women undress as they read the headlines" and “two boring people behind a desk,” Couric and Co. had a lot of creative room to work with, so what happened?

Along with the hype, there was some internal CBS grumbling. CBS veteran correspondents took pay cuts to pay for her salary, over-budgeted segment shoots and her entourage (who were brought over from NBC), all of which also took up the precious news budget. And though Couric tried to usher in a new evening news format, the network ended up alienating their audience instead of adding more new viewers, the program went back to a traditional format. When asked what regrets she may have about leaving her perch at NBC, she tells NYMag:

“I still believe I did the right thing, in my heart,” she says. “I would always regret not taking it. There are no guarantees, I knew that going in. I didn’t think I was going to take the evening news world by storm, and if I gave anyone that impression, I’m embarrassed. I thought I had done something for a while, this genre could use a little shot in the arm, maybe I could revitalize it somewhat. I had no delusions that this was a growing enterprise. I mean, I’m not an idiot … I think that’s why some of this pettiness and sort of gleeful evisceration of me doesn’t cut as much as you might think or even I might have thought. My expectations were never so high that if I wasn’t No. 1 it would be devastating to me.”

However, Couric plans to continue to try to charm her way in to the evening news audiences hearts. And she's not leaving any time soon, as she's "looking to the 2008 election cycle as an opportunity to build her reputation as the network’s authoritative voice." If she can't prove herself there, we look forward to the inevitable Barbara Walters hour long cry-fest with America's fallen sweetheart.