Countdown To The Museum Mile Festival 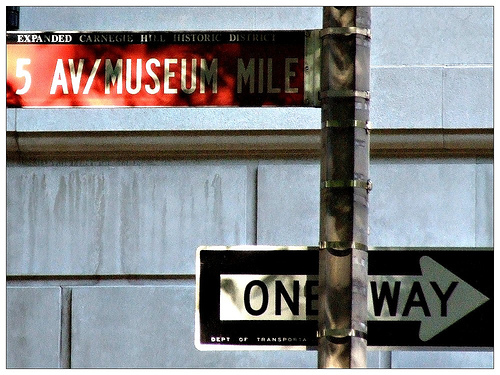 The 29th Annual Museum Mile Festival is tomorrow, with more creativity than you can imagine concentrated in a festival on 5th Avenue (from 82nd Street to 105th Street). From the Met to El Museo del Barrio you'll be able to find waived museum admissions.

Museo del Barrio director Julian Zugazagoitia tells NY1, “It's the greatest day because all of Fifth Avenue is closed, so that all of the museums can be visited free of charge, so you can go from one museum to the other." They'll be showing off some modern art and a mural on the walk side. Other museums involved in the day are: Goethe-Institut, Neue Galerie, Guggenheim, Cooper-Hewitt, National Academy Museum, The Jewish Museum and The Museum of the City of New York.

In addition to museums, you'll find artists of all ages showing off their work in a pedestrian mall. Art won't be the only thing available for absorbing as you make your way through the mile, the festival also includes music and dance. Expect some kid-friendly workshops as well. Last year attendees could follow street muralist De La Vega around and help chalk up the sidewalks - full list of this years events here. Some things to put on your checklist: the Met's newly-renovated Greek and Roman galleries and Neue Galerie's popular Van Gogh and Expressionism exhibit.

City Guide suggests taking a bus up Madison Avenue to 104th Street, walking one block west to Fifth Avenue, and begin at El Museo del Barrio, then work your way down. The festival is Tuesday, June 12th from 6 to 9pm.