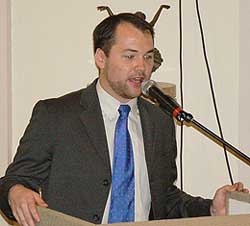 Eight years ago, Corey Johnson became, as the Advocate put it, "an instant gay hero" when the story of how he came out to his high school football team was detailed on the front page of The New York Times and in Sports Illustrated. Now Johnson, who works as director of government affairs at a real estate firm, is a gay rights activist who helped coordinate tonight's Proposition 8 protest outside the Mormon Temple of the Church of Latter Day Saints on the Upper West Side. We managed to speak with him as he was getting ready for the protest:

Apparently thousands are expected at tonight's protest. What do you have planned?
We can not emphasize enough that this is a peaceful protest. We will not respond to their hatred with hatred. There will be a picket line with signs and chanting and also speeches from community leaders.

Can you explain why Proposition 8 is hateful?
For the first time, a state Constitution has been amended to take away existing rights -- in this case, the right to marry. And this Prop. victory could invalidate more than 18,000 marriages that have happened in CA since June 17.

Why target the Mormon Church, rather than Catholics or other religious groups who oppose Prop 8?
The Mormon Church distinguished itself from all other anti-gay groups by getting their congregation to contribute more than $20 million in their campaign of homophobia which resulted in the passage of Prop. 8, thereby doing away with marriage equality for all.

There's a lot of anger at Mormons, do you think it's all justified?
The anger is not towards Mormons, but rather towards the leaders of the Mormon Church, who purposely spread lies about gays and lesbians to create an atmosphere of fear and hatred.

Were you surprised that Prop 8 passed?
Unfortunately, no. An anti-gay effort to amend the Constitution in Arizona in 2006 failed. And Mormons were instrumental in that campaign. So they came back in 2008 to make sure the Arizona amendment passed. That defeat to our community and to human rights was in addition to anti-gay victories in California, Florida and Arkansas this past week.

There has been criticism and even admissions that the Prop 8 opponents didn't do enough to engage minority groups--specifically, African-Americans who voted 70% for Prop 8. Do you think that's true or do you think there are certain segments that are still socially conservative?
The Mormon Church funded vile and misleading commercials about the gay community which unfortunately convinced constituencies all over California. If it weren't for this massive funding, people would not have seen these hateful messages. Their campaign of lies also won over religious people from the African-American and Latino churches as well.

Earlier this year, NY Governor David Paterson said out-of-state same-sex marriages would be recognized. Do you think same sex marriages will be legal in NY some day?
Yes, I do. Paterson has already shown his support and I hope he goes further. He said he would sign legislation if it passed the Senate and The Assembly.

Back in 2000, you were featured in Sports Illustrated and the NY Times after you came out--and you were a co-captain high school football team at the time. Do you think people are generally more accepting of LGBT people now?
In some ways, yes. But clearly, with our defeats last week, we have a long way to go. I would encourage all people to come out, get educated and get active.

And do you plan on getting married some day?
If I am ever lucky enough. ;) I look forward to the day that young gay people grow up knowing that marriage is an option for everyone. not only for their straight friends and neighbors.

Tonight's protest against Proposition 8 will start at 6:30 p.m., outside the New York Manhattan Mormon Temple at 125 Columbus Ave at 65th Street.