While today's news are filled with shocking crimes with awful details, they are as random and senseless as the ones of the 19th century. Starting on Sunday, June 23, BBC America's critically-acclaimed original crime drama, COPPER, returns, set in the tumultuous year of 1865 with Detective Kevin Corcoran examining the evil that lurks in Five Points and beyond. Today, through June 24, we're giving you a chance to exercise your skills of detection and win an iPad Mini and a copy of Gotham at War: New York City, 1860-1865. Five runners-up will receive COPPER's first season on DVD. 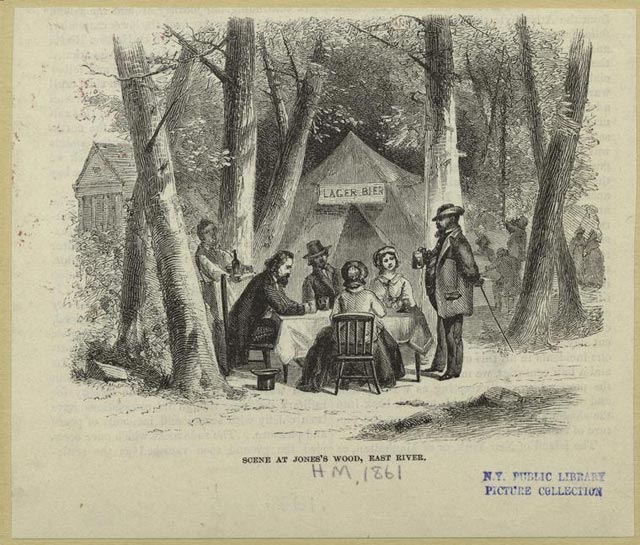 Jones' Wood was a popular picnic spot during the 1860s

We're changing the names of the characters and not giving specific locations—Detective Corcoran didn't have Google back then! Then give your best answer, via the form below, for your chance to win. (Gothamist LLC contest rules apply.)

On July 25, 1865, many New Yorkers flocked to Jones' Wood, which was located on what's now the Upper East Side. The area was a popular outdoor recreation alternative to Central Park, which had many rules prohibiting more working-class pleasures like drinking beer, playing music, and more. But the day ended in tragedy for one group of picnickers.

In fact, the group had attended a Fenian Picnic, an annual event organized by Irish-Americans, involving dancing, sports, speeches and, yes, eating and drinking. One account claimed that 30,000 people attended, "Our Celtic friends are warmhearted and impulsive. They are fond of whisky, and are apt to indulge in a little ground and lofty tumbling at these festive gatherings... The young Irish girls who danced and flirted, and talked, and romped, and sat in the swings, and played pretty little games on the greensward, were mainly shop girls, work girls of various degree."

One reveler "John Smith," attended the festivities with a few male and female companions. He organized his group's departure by boat, spying a set of oars nearby and asked a boy to retrieve them for him. The group made their way to a public house for more refreshments—but then Smith was attacked by a knife-wielding man. Slashed in the throat and repeatedly stabbed in his back and other areas, Smith walked 150 feet until he collapsed and died. His friend, "Michael Adams," was also beaten and stabbed.

A police officer heard a noise at 55th Street and the East River, and saw Smith with blood flowing from his head. Smith collapsed and then Adams, who was also bloody, pointed at a man running towards the docks.

The suspect went aboard a boat and shoved off into the East River, while taunting the police, "Goddamn you, shoot," and baring his breast. (The officer did in fact shoot at him, but missed.) However, when the suspect finally came ashore, the police arrested him, admitting to beating the victim but denying that he stabbed him.

Enter the contest below. The contest is open through June 27; the answer to this mystery will be posted on June 28.

Immerse yourself in 1860s New York in BBC America's COPPER, the critically-acclaimed cop drama series. COPPER premieres Sunday, June 23rd at 10/9c only on BBC America—watch a trailer below!

#bbc america
#copper
#crime contest
#gothamist collaboration
Do you know the scoop? Send us a Tip