As the BBC America original crime drama COPPER shows, 1860s New York was full of random and unspeakable violence. And this murder, which took place in what is now the posh Manhattan neighborhood of Sutton Place, was exactly that. 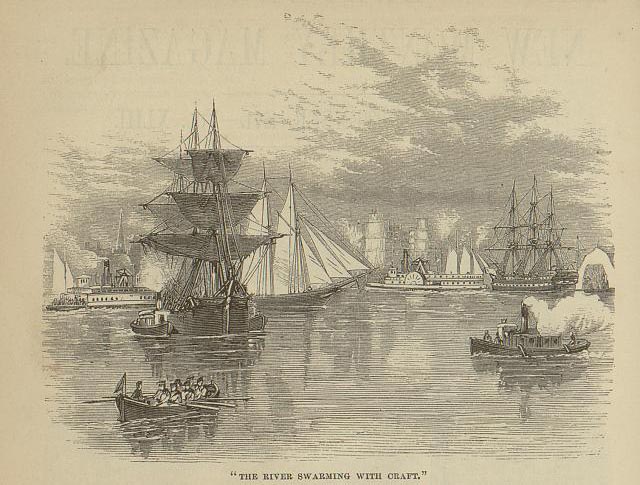 An illustration in Harper's Weekly

James Smith, William Rabitaille and a small group of men and women had been picnicking in Jones' Wood, a popular spot (on what's now the Upper East Side) for the working-class to drink beer, wave flags, play music and participate in other activities that were banned in Central Park. Smith and his group left by taking a boat on the East River—and they decided to take the oars from another boat. A fatal decision.

When the group disembarked a few blocks south at 55th Street, they entered a public house called Allan's for cider and soda water. Rabitaille testified:

Smith and Rabitaille were also both stabbed repeatedly, and Smith died of his numerous wounds. All because he stole a stranger's boat oars—and that stranger got angry.

Rabitaille managed to leave the bar and told two police officers what happened, the cops chased a suspect. It turned out the man who was apprehended was the "tall man" who assaulted Rabitaille, which his short associate, John Burns, had attacked Smith. A jury found that Burns killed James Smith on July 25, 1865 at 55th Street and the East River, but it's unclear whether the police ever caught Burns—a warrant was placed for his arrest after an inquest.

If you guessed right and you're one of our lucky winners, you'll be notified via email, so be on the lookout!

Step back into the grisly world of 1860s New York with BBC America's COPPER, the critically-acclaimed cop drama series. COPPER airs Sundays, at 10/9c only on BBC America—watch a trailer below!

#bbc america
#copper
#gothamist collaboration
Do you know the scoop? Send us a Tip