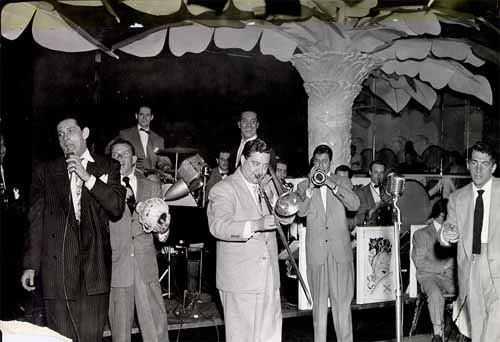 The Copacabana, perhaps best known as the muse for Barry Manilow's song of the same name, is closing this weekend (the papers are reporting last night, however their website has a flyer for a Last Dance, tonight).

The club has been around since WWII, and was at one point a staple stop in New York's nightlife circuit. Having already had to move three times, finding a new home isn't something new for owner (since 1976) John Juliano, who says, "Like anything else in life, you're born and you die. We'll try to find another spot by the fall."

This most recent Copacabana was a three-floor space on the West Side of Manhattan, a replica of the original. "The hottest spot north of Havana" lived up to it's reputation back then, with Frank Sinatra, Sammy Davis Jr. and Dean Martin being the kings of the Copa. According to Wikipedia, the historic walls of the first also saw "Harry Belafonte get banned in 1944, for being African American. He was in the U.S. Navy at the time, and was denied entry with a date (he returned in the 1950s as a headliner at the club)." The AP recalls that:

The original was the scene of a memorable 1957 brawl involving New York Yankees stars Mickey Mantle and Billy Martin, and eventually became a disco in the mid-1970s.

"In the '40s and '50s, every star possible appeared at the Copa," Juliano said. "You had to play the Copa if you wanted to get anywhere."

Copa II was opened in 1992. The current Copacabana, which caters to the hip-hop and salsa crowds, opened on West 34th Street in 2001.

You've probably seen it in movies, too, the first Copa (which was on E 60th St) was in Goodfellas, Raging Bull and Tootsie. Check out this classic scene from the former, makes us wonder if it's moved so far away from what the original was, if it's worth reopening again. Imagine what Studio 54 would be like if it tried to keep the original feel alive for all ths time.

It will reopen, though (most likely by October), and it's not closing down because of a rent hike or condos...this time it's to make way for a subway. It was condemned when the city decided to extend the 7 train. As of now, a possible move to the Bronx has been mentioned, of which the owner said, "It would kill me, but what are you going to do?"