The placement of a realistic-looking statue of a sleepwalking man wearing only underwear has rocked the campus of Wellesley College. Some students are asking that the statue be removed, calling it an "inappropriate and potentially harmful addition to our community," while the museum's director says the work "provokes dialogue, and discourse is at the core of education." And what does the artist think? Tony Matelli told us that the reaction is "perplexing... It's been incredible, the rate at which this has blown up, so it's been very surprising in that regard."

The Brooklyn-based artist's work is the focus of an exhibit, Tony Matelli: New Gravity, opening today at the college's Davis Museum. The museum's description reads: "In Matelli’s work, the physical laws of objects are often reversed, upended or atomized, and with these deft manipulations of matter and gravity come profound reorientations in perspective and ultimately, states of being. Staged dramatically among galleries on two floors of the Davis, the exhibition will also extend beyond the museum walls to sculptures sited outdoors on campus." 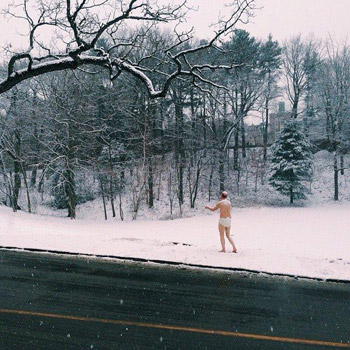 The controversial piece, Sleepwalker, sits on a road near the center of campus, just beyond the museum. Matelli said the statue's placement outside was always part of the exhibition strategy: "There's another piece on campus that goes outside as well, which is of a stray dog"—which looks like this—"so it's essentially two stray characters on the grounds of the campus, and then the exhibition is inside. The location of the sleepwalker is specific, because there's one large window at the top of the museum that looks to the outside, and only one, so this sculpture is situated so that you can see it directly from that window which is the last room in the exhibition.

"So, as you go through the exhibition, the very last room, now you gaze out onto the Sleepwalker who's on this kind of lawn," Matelli explained. "And that increases the empathy that you feel towards this figure, you know, its sense of isolation, its sense of displacement." This is not Matelli's first underwear-wearing sleepwalker—in 2009, he created a female Sleepwalker.

Davis Museum director Lisa Fischman wrote on the museum's website, "I love the idea of art escaping the museum and muddling the line between what we expect to be inside (art) and what we expect to be outside (life). Reaction to the Sleepwalker’s presence has been varied. I have watched from the 5th floor windows, and on the ground, as students stop to interact playfully with the sculpture. They take selfies with him, snap pics with their phones, and gather to look at this new figure on the Wellesley landscape—even in the snow. I have also heard the opinions of others who find the sculpture troubling."

The petition to relocate the statue inside the museum states, "Within just a few hours of its outdoor installation, the highly lifelike sculpture by Tony Matelli, entitled 'Sleepwalker,' has become a source of apprehension, fear, and triggering thoughts regarding sexual assault for some members of our campus community. While it may appear humorous, or thought provoking to some, the 'Sleepwalker' has already become a source of undue stress for a number of Wellesley College students, the majority of whom live, study, and work on campus."

"I don't care where it goes," Matelli emphatically said. "This sculpture can go anywhere and it looks great anywhere. It happens to be in this specific location because you can see it from the top floor... If they desperately need it moved, we'll move it, it's not a big deal. The museum might have a different perspective on that... I'm fine with whatever the museum decides."

As for the students who object to the piece, he urged, "I think it's important to think about what you're seeing, not what you think you're seeing, and I think its important to spend some time with a thing, think about it a couple more times. You know, art is sometimes slow. It's also sometimes fast and it can be both things at once. It's complicated and the interpretation of it is subjective.

"I have no control over other people's subjectivity and no one does, so everyone needs to know that they're individual and they're coming to something with their own stuff," Matelli said. "Sometimes that stuff is not in the work, it's in them. And I think that these folks who are really riled up about this might not get that. They might not be thinking about that. It's college after all, they're here to learn stuff."

Matelli is scheduled to give a lecture at the school next week, but says there are tentative plans to meet with some students who are unhappy with the sculpture, "We've been talking so much about how much we've enjoyed the dialogue around this, I think that we're probably going to sit down and listen to what they have to say." As for his upcoming work, he working on a show in Moscow and will have a solo show at the Marlborough Chelsea.

#art
#sculpture
#sleepwalker
#tony matelli
#wellesley college
#original
Do you know the scoop? Comment below or Send us a Tip
A new Gothamist is coming! We’ve moved comments over to our beta site. Click here to join the conversation and get a preview of our new website.