We’re a long way from 1981, the year that most people consider to be the beginning of America's long, turbulent history with HIV. Now, “HIV is no longer a death sentence” has become a common refrain, and overall, diagnoses in the U.S. are dropping. In 2012, the FDA approved Truvada, which propelled a certain shift in the way we think about HIV infection—a man taking the drug for PrEP (pre-exposure prophylaxsis) confided to Gothamist recently, “My mindset is changing,” while a debate’s ensued about whether slut shaming “Truvada whores” is particularly useful or not.

After all this apparent progress, AIDS has lost a certain sense of urgency in the official conversation, and there’s been a notable decline in stigma too—all of which has been reflected in the American cultural milieu. This clean, transformative arc in the way we think and talk about AIDS is on full display at Art AIDS America, an enormously ambitious but controversial new traveling exhibition that’s now arrived at The Bronx Museum of the Arts. The museum has added its own curatorial flavor, but will that be enough to account for the major gaps in the story told by Art AIDS America?

AIDS might be the only illness to have acquired such a rich, complex visual language in American art, which definitely deserves to be honored and examined in better detail than mainstream culture and the self-policing art world have so far allowed. One of the curators, Rock Hushka, told me that he hopes the exhibition will demonstrate that the AIDS crisis “propelled the radical shift” from the conceptual craze of the early ‘80s to now, when “the authority of the artist” once again dominates artmaking—another nice, clean arc from AIDS-then to AIDS-now. 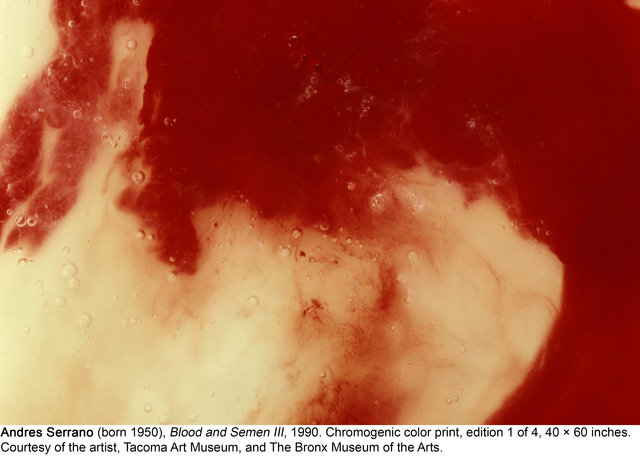 You’d be forgiven for assuming that a show that foregrounds identity-centric art might include a large proportion of work by people of color. Well, it doesn’t—of the 107 artists whose work appears in the Art AIDS America catalogue, just four of them identify as Black. Since the exhibition’s premiere at the Tacoma Art Museum in October 2015, protesters and some critics have demanded an explanation as to why an exhibition focused on artmaking about a disease that disproportionately impacted African-Americans has included so few black artists.

Despite the widespread consensus that AIDS is no longer a death sentence, AIDS is a very different reality for people of color, low-income earners, and people without easy access to healthcare (all of which describe a large proportion of people living in the Bronx). Treatment Action Group (TAG, an ACT UP descendent), asserts that universal access to the presently super-expensive HIV drugs could be done on the cheap (Truvada is $1,700 per 30 day RX). But the disease isn’t treatable in the first place if the patient doesn’t know they’re sick—even so, New York City continues to close HIV testing centers, even though the number of diagnoses is growing for some groups. According to the CDC, “African Americans continue to experience the greatest burden from HIV,” accounting for 44 percent of all diagnoses (and 12 percent of the population). In many way, the face of AIDS in America is a person of color. 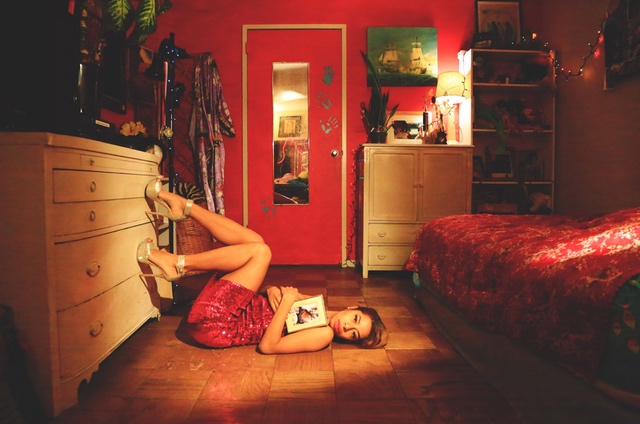 Kia Labeija, 24. (Courtesy of the artist, Tacoma Art Museum, and the Bronx Museum of Arts)

Enter the curators, Hushka and Jonathan David Kat (Chief Curator at the Tacoma Art Museum and an academic, respectively), who have said that they weren’t aiming for a comprehensive analysis—a favorite line of prescriptivist adherents to the canon making excuses for maintaining exclusiveness. (And yet, TAM boasts that the show “explores the whole spectrum of artistic responses to AIDS.”)

“First I need to emphasize this is not an exhibition about the crisis, but about the way the general arc of American art history was bent by the crisis,” Hushka said in a recent interview. In other words, Art AIDS America wasn’t aiming to reflect reality, necessarily, only the way that AIDS affected those artists already included in the trajectory of “American art history.”

There’s no doubt the curators were presented with an insane decade-long task of gathering an exhibition of this size and scope, ostensibly mining 35 years of American art work to compile work from 107 artists. On physically entering the space at the Bronx Museum, the weight of the exhibition’s responsibility to such a far-reaching and ongoing crisis is felt immediately—making your way through the room it feels heavy, and maybe even a bit haunted. Nearly every piece feels unskippable and engaging, only a few fell relatively flat. But there’s noticeably something missing.

It’s not surprising that the canon is represented in full force—Robert Mapplethorpe, Sue Coe, and David Wojnarowicz’s famous doom-filled photograph that imagines buffaloes tumbling off a cliff (“Untitled Buffalo,” 1988-1989), among many more. 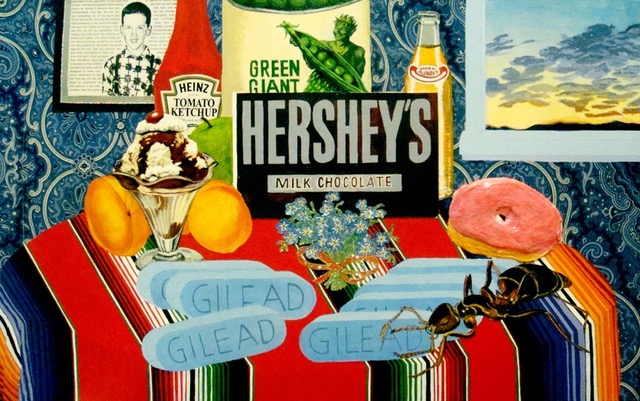 Joey Terrill, Still-Life with Forget-Me-Nots and One Week's Dose of Truvada, 2012. (Courtesy of the artist, Tacoma Art Museum, and the Bronx Museum of Arts)

When guests first enter the main room, they’re immediately flanked by Keith Haring on either side. To the right, there is a rather unusual Haring piece, an icon-shaped diptych cast in bronze, painted in an iridescent white-gold tinged paint, and engraved with the artist’s trademark figures—some swirling upward with angel’s wings while the mortals toil in a throng below. On the left, there’s a lively answer to the deathly piece on the opposite end: an arrangement of four color, dynamic silkscreens from the series “Apocalypse.” Instead of a serene passing, they conjure a wild, uproarious turnover.

Haring’s presence is not just obligatory, but mandatory, as one of the most immediately referential artists of the 20th century. (And I’d bet Haring’s trademark everyman doodles are the first image that comes to anyone’s mind if asked to think about AIDS and art.) And that’s not just because Haring, who died of AIDS-related causes in 1990 at 31, represented the archetype of early HIV victims: the artsy, gay, white male. Haring also dedicated the last few years of his life and the resources he’d amassed as a famous artist to organizations that supported people living with HIV. And in a 1989 Rolling Stone profile, he raised a giant middle finger to AIDS taboos and spoke publicly, explicitly about his illness, which along with his artwork—some of it unflinchingly tackling AIDS and other interrelated societal problems like crack and poverty—inextricably bound Haring to AIDS and activism.

Nevertheless, Haring told Rolling Stone that he felt insecure about his place in the art world and eventually the art history canon. “It’s frightening how much power critics and curators have,” he said. “People like that may have enough power to completely write you out of history.”

That power of the curator, especially, has been felt at Art AIDS America. And the problem isn’t simply a numbers game—as Kea Labeija clearly demonstrated, being included in the show hasn’t counted as a win. An artist who was born with the disease to an untested, HIV positive mother, Labeija’s three photographs made the cut, but she’s talked extensively about her feeling of disappointment with the show.

"It hurt," Labeija told The Stranger. "To be a part of this show and to still feel like I'm standing alone just really affected me in a deep way." In her official statement about the show, Labeija wrote: “At the end of the day what I understood in that moment is that this privilege will continue to kill us. If not by AIDS- by being silenced, by guns, by assumption, and by mere hatred.”

Interestingly, Hushka told us that one of his major concerns as a curator was overcoming “the silence about AIDS” that continues to plague American society. “We have to remember that more than 1.2 million Americans are HIV positive and this number continues to grow,” he said. Of course, "silence" was singled out by ACT UP as the major obstacle to HIV awareness, and in 1987 the activist group launched the "Silence = Death" campaign which grouped the words with a pink triangle, recalling the Nazi's practice of labeling homosexuals. The slogan has become a ubiquitous one and even appears in the exhibition as a glowing neon sign.

But the implication of Art AIDS America is that AIDS has passed into the realm of the retrospective, and by laying claim to be “the first exhibition to examine the deep and ongoing influence of the AIDS crisis on American art,” the curators have not only failed to nod to a rich history of AIDS art initiatives that came before them, they have also overshadowed the existence of actual exhibitions that spotlighted a more diverse group of artists. 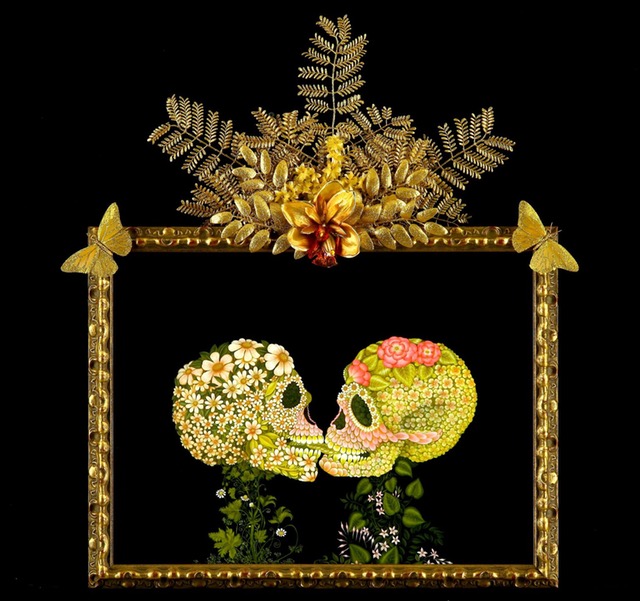 Visual AIDS is an organization that’s fully (and full-time) dedicated to outlining not an AIDS-art canon per se, but rather a living archive of AIDS-related work and network of artists living with HIV/AIDS. They’ve organized a number of exhibitions since at least 1995, and have been brought on by The Bronx Museum to help expand the Art AIDS America show, without explicitly noting that they’re diversifying it, of course. (Well, save for the five works they’ve added from the museum’s permanent collection, which together were titled “Black Gay Men NYC Addendum 2016” in a checklist sent to us.)

The fact that this exhibition has come to the Bronx should not be overlooked. The borough was hit hard starting from the epidemic’s early years, and in 2008, New York City as a whole was seeing an HIV infection rate at three times the national average. And while the Bronx Museum hasn’t done much to change the actual content of the exhibition, aside from those five works by a group of all-male artists closely tied to the Bronx—Glenn Ligon, Whitfield Lovell, Willie Cole, and Charles LeDray—it seems they’re hoping to address the issue in a few other minor ways. On Friday July 22, Visual AIDS will co-host the museum’s free open-mic storytelling event, a special edition “inspired” by the artwork on view, and on Saturday September 10, the museum is hosting a “TBD” panel discussion that includes two top-directors from the Bronx-Lebanon Hospital Center, and another higher-up at the LGBT Healthcare Network.

It remains to be seen how exactly these events will play out, but the fact that the exhibition itself hasn’t changed radically since its premiere in Tacoma doesn’t bode well. And while the show succeeds in developing some parts of the AIDS conversation in the works that it does present, it hardly fulfills its mission of overcoming the silence that has misrepresented the crisis since the beginning.

An art exhibition about AIDS and America is only meaningful in that it reflects the actual impact of the disease, and to imply that there hasn't been meaningful representation in art by people of color is irresponsible at best and, at worst, continues to silence those who have unevenly bore the brunt of AIDS. The anger about the show may have reached a low boil by now, but it’s only a matter of time before visitors start to pick up on the ironic incongruity of Art AIDS America in the Bronx.

Art AIDS America continues at The Bronx Museum of the Arts through September 25th.

Nicole Disser lives in Bed-Stuy, Brooklyn with exactly zero cats. She's a regular contributor for Bedford + Bowery and her work has appeared in iD and Brooklyn Magazine.

#aids
#art aids america
#art criticism
#art history
#the bronx
#original
Do you know the scoop? Comment below or Send us a Tip