Gwyneth Paltrow and Chris Martin have separated, and announced the news late this afternoon on Paltrow's website GOOP in a post called "Conscious Uncoupling." They stated: "We have been working hard for well over a year, some of it together, some of it separated, to see what might have been possible between us, and we have come to the conclusion that while we love each other very much we will remain separate." Last year there was speculation that Vanity Fair was going to run a story about how Paltrow cheated on Martin, but the story never ran.

The Academy Award-winning actress and multi-platinum Coldplay frontman have been married for 10 years and have two children, Apple Martin and Moses Martin. The statement pointedly notes that they have been spending time away from each other over the past year, with Paltrow working on films and Martin working on his music and touring.

"It is with hearts full of sadness that we have decided to separate. We have been working hard for well over a year, some of it together, some of it separated, to see what might have been possible between us, and we have come to the conclusion that while we love each other very much we will remain separate. We are, however, and always will be a family, and in many ways we are closer than we have ever been. We are parents first and foremost, to two incredibly wonderful children and we ask for their and our space and privacy to be respected at this difficult time. We have always conducted our relationship privately, and we hope that as we consciously uncouple and coparent, we will be able to continue in the same manner."

Traffic appears to be overwhelming GOOP.com, which is displaying a "500 Internal Server Error." 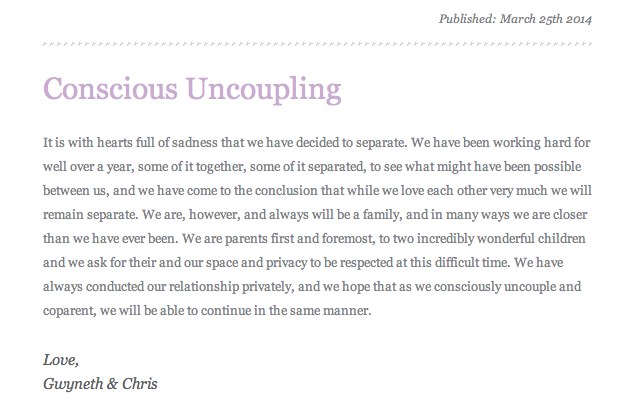 TMZ claims, "It's interesting ... in March, 2013, TMZ broke a story Chris made an offer on a Brentwood home. His people told us it was for him and his band mates, but Gwyneth got involved and killed the deal, claiming [there] was mold." TMZ also calls this the "Bougiest Separation Ever." Meanwhile, the couple recently bought a John Lautner-designed home in Malibu, CA, for $14 million.

Of course the real question is who will get Beyonce and Jay-Z in the breakup?

#chris martin
#conscious uncoupling
#goop
#gwyneth paltrow
#separation
Do you know the scoop? Comment below or Send us a Tip