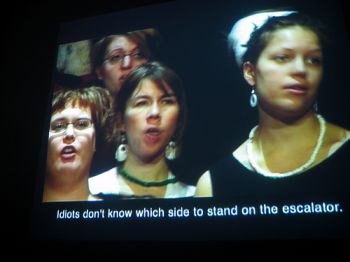 Last year the Complaint Choir voiced their grievances in Chicago, and yesterday it was New York's turn. Complaints Choir, an internationally acclaimed community art project, was organized by The New Wilderness Foundation in collaboration with the P.S. 1 Contemporary Art Center and the New York-based Finnish Cultural Institute. Meeting at 4 p.m. yesterday afternoon at Mehanata Bulgarian Bar, those in attendance had the project explained to them, as videos were shown, and lyrics were created. From the press release:

Participants write down their gripes ­ whether they reflect life's tiny inconveniences, personal angst or cosmic conundrums and together edit their list into a set of lyrics, usually breaking into expert groups focusing on particular subjects. The composer (Alan Licht, whose work combines elements of pop, free jazz and minimalism) then turns those lyrics into a song, with the instruction that it be upbeat, if not downright anthemic. After sufficient rehearsal, the choir performs publicly.

reports back that the 45 in attendance (women outnumbering men) griped about "Why are elections determined by morons?" "Summers are getting hotter and hotter," "Smokers who blow their smoke in my face," and "Long Islanders who think they're New Yorkers, but they're not."

Check out more from the Complaints Choir (whose roots are in the Finnish expression "Valituskuoro," a term used to describe situations where many people are complaining simultaneously) on their website. Or better yet, head to P.S.1 for videos from worldwide Complaints Choirs, that are being shown as part of the “Arctic Hysteria” exhibition (running through September 15). A feature length documentary is expected out in 2009.