When Michelle Buteau initially made the career jump from journalism to comedy in the early '00s, she hustled to get any gig she could, no matter how strange. The decision to do a 180 on her career came in the midst of a bad break-up with a college boyfriend, and in the aftermath of the 9/11 attacks: "I was editing the news and 9/11 happened, and I was like, 'fuck, people are dying, people are mourning, I'm stuck in edit bay lookin' at crazy shit, and time is now.' So I feel like that was my mid-life crisis, where I was like, 'I gotta cheat on my wife and get a nice car.'"

Having worked as a field producer in broadcast journalism for almost a decade, she quickly realized how much overlap there was in the two fields: "I welcomed the crazy," she told us. "I worked in news so I was around kind of kooky, crazy people and I worked overnight, which is a whole other cemetery for crazy people. So I went to Craigslist and I was just like, 'who's lookin' for a sassy person that will work for free?'"

That led to some very odd jobs around the New York City area, including doing warm-up at both Maury and a strip club in Queens: "They gave me some cash, ones. And then also there's a lot of hot food."

Eventually, after spending lots of time honing her craft performing stand-up in the gay cabaret scene, the Chitlin' Circuit, and the "bringer scene" ("That's where you have to bring people to shows"), she started getting bigger and better gigs, including co-hosting VH1's Big Morning Buzz. She also became a stand-out star on Best Week Ever and appeared on the likes of Key & Peele, Broad City, and The Eric Andre Show. "I just wanted as much experience as possible because I feel like I really missed out doing high school plays and stuff because I was too shy," Buteau says.

She now hosts a semi-regular show called #Adulting with Jordan Carlos at the Bell House, and since appearing on the very first episode, she has become the unofficial "third dope queen" on the immensely popular 2 Dope Queens, recently appearing in their HBO special. But she's also breaking out on her own, and just launched a podcast at WNYC called Late Night Whenever.

The podcast combines her disarming, charismatic comedic style with the late night format she grew up on. "I've always wanted to do late night, since I was a little kid, I just loved watching Johnny Carson," she said. "And especially as a young black female, you never see yourself represented, and Whoopi Goldberg was the first thing that I saw, and I was just like, 'what is that?' And she was doing characters, and it was just wild and innovative and so alternative."

As for her own show, "It's sort of like I'm a soccer mom and this is my 'me time' in the tub— Calgon take me away with a box of Pinot Grigio!—and that's what the show is and that's what I want to bring to people's lives too, into their cute little ear buds."

The comedian/actress, who was born in New Jersey to Caribbean parents, compared the trajectory of her career to something she heard Lady Gaga say at Citi Field last year: "I went to go see her in concert a couple months ago and she said something really interesting that just resonated with me. She's like, 'I put my head down for ten years and I just worked my ass off. And I woke up and now I'm here performing for you guys.' So that's what it kind of feels like for me."

She's excited to be part of a landscape filled with female comedians breaking down doors in the talk show world left and right: "I think Sarah Silverman, Aisha Tyler, Kathy Griffin having her own reality show, just a bunch of strong bad-ass bitches doing something in an alternative box, whether it's a late night show showcasing other comedians, or even daytime TV, like Michelle Collins being on The View." 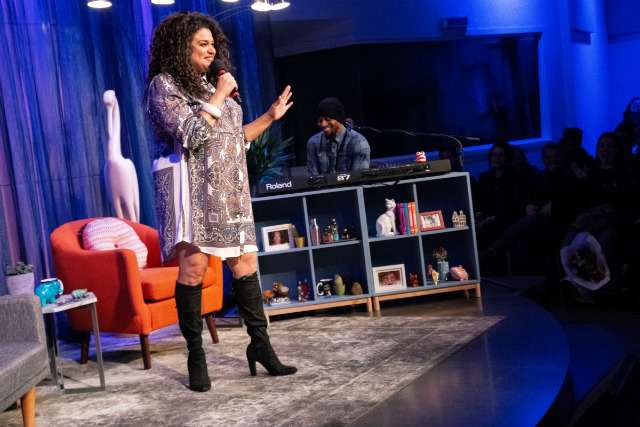 She's also very happy that the comedy world has begun going through its own reckoning with misogyny and sexism with the #MeToo movement: "It's sort of just like the substitute teacher has gone and then Michelle Pfeiffer came in and everybody else was Coolio and she's like, 'fuckin' behave.' So it's been interesting to watch. Everyone is polite, they're on their p's and q's and they know."

Finding the balance between her comedy career and what she refers to as her "civilian lifestyle"—she lives in Brooklyn with her husband, who is Dutch and has his own furniture business—was hard when she was shifting between various parts of the country in "too may different timezones." Although she spent some time in L.A. for her career years back, she feels settled in the city now. "It's the vibe, man. It's the hustle, it's that we're all in it together," she said. "[There are] so many languages and smells and experiences you can have on just a one block radius, that you can't get anywhere else if you went to another country."

"And that's what New York City and Brooklyn gives, and it's just fuckin' inspirational, man, it's like I can walk the streets and come up with stories, because something has happened, you know I see something, somebody asks me something. I was walkin' to UCB the other day doing a show and this mothafucka came up to me and he was like, 'I'm gonna use you as much coffee table.' What? That is creepy as fuck my dude, also thank you."