Comedian Jena Friedman: 'Anyone Not Voting For Hillary At This Point Is An Idiot, Misogynist, Or Racist'

Former Daily Show producer and Letterman writer Jena Friedman is bringing her "American Cunt" show from the stage to the small screen. This Thursday, her hour-long special—which she took to the Edinburgh Fringe Festival last year—will hit the streaming network Seeso, offering "a probing examination into the U.S. body politic and a couple of dick jokes." Friedman (who you may have seen expertly interview Making A Murderer's Ken Kratz) has a talent for generating laughter and terror all in one comedic swoop—she's one of the most unique and important voices in comedy right now, so listen up.

You've been touring your "American Cunt" show for a little while, how did the special, and the title, come about? I originally wrote the show for the Edinburgh Fringe Festival and the title was partly a play on how often the word cunt is used in the UK, it's a lot more colloquial there. I thought of the worst thing I could call the show... and then I ran it by a friend and she said, "you have to call it that, it's so you." Also, a name like "American Cunt" gave me permission to say what I wanted to say without worrying about offending anyone.

In the political landscape, the past year has been surreal, and the past few months have been especially unbelievable—every day there's a new thing that is just awful, partially because it doesn't even surprise us anymore. Have you had to tweak your show much since you first started? Absolutely, the whole second half of the show is about the election and it kept changing up until about a week before I taped it (which was August 22nd). The Trump stuff changed the most, at first I didn't even talk about him in the show, because it felt too cheap and easy and I really didn't think he was going to have much traction against Jeb (remember him!) and Kasich. But then as the primaries went on and Trump began rising in the polls, I began talking about him more. By June, I had about 15 minutes on Trump that was really working and then all of the sudden I had to throw it all away because he just stopped being funny, it all just became scary. I think the fear has reached its tipping point but there's always Wikileaks, so we'll see.

Last year you said that your comedy hasn't done well in mainstream America, do you think that's changed at all? The special is on Seeso, so it's not exactly mainstream, but it will also be available on Amazon so we'll see!

You share your thoughts on Twitter a lot — from the Amanda Knox documentary to Donald Trump to ebola — would you say the majority of the feedback you get is negative or positive? Trump and Ebola in the same sentence feels so right. To answer your question, I have no idea, I treat Twitter like a joke book that talks back to me, if it starts getting mean or harass-y, I tend to delete whatever it is I was tweeting about.

On the bright side, at the moment, people who are engaging me in political discourse on Twitter are doing so without death threats #progress

What amount of negativity seems to be based in sexism? I personally haven't (yet) been subjected to too much sexual harassment online, it could be because I'm still under the radar or maybe because I'm over 30. 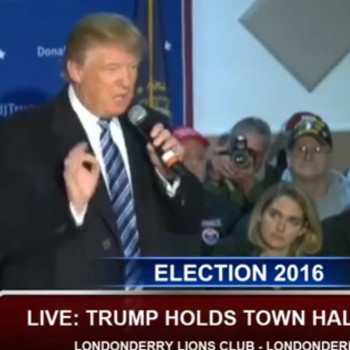 Trump, with Friedman in the background. From Netflix's "Undecided: The Movie"
Do you think you've reached anyone, gotten through to anyone, in regards to this election?

There was a guy I talked to on an hour long flight, he had supported Bernie in the primaries and wasn't planning on voting in the election. He later emailed me to say that after our conversation he was going to vote for Hillary, so that was encouraging. I felt bad for ambushing a captive audience but he didn't seem to mind.

As for on Twitter, I have no idea. That's the question, right, how do we reach people? Especially now, when I want to be "understanding" of the other side but really feel that anyone not voting for Hillary at this point is just an idiot, misogynist and/or racist. Off the record. Just kidding, you can print that.

Is humor helpful in dealing with Trump and all of the hateful people who have shown their faces supporting him? I think so, in the same way that it's helpful to joke about terminal cancer if you have it.

When I spoke with Judd Apatow, he told me that he had "thought that George Bush wouldn't get re-elected as a result of the amazing work of The Daily Show, and then he was re-elected." Do you think shows like this can get through to the other side? I don't know, I have seen evidence from field pieces I've produced on The Daily Show of comedy being able to move the needle in a more progressive direction but this election is its own animal, it's so unprecedented in so many ways and it really isn't about logic. We're in a culture war. People seem to be voting based on their emotions, how do we break through that? If you know, please tell me.

As a former Daily Show producer, what would your ultimate segment be to produce right now revolving around this election? I have always found Trump's female supporters fascinating, the deep Stockholm Syndrome or self-hate they must possess. I can't believe more hasn't been done on them.

If you had a few minutes with Trump, what would you say to him? Who hurt you?

#american cunt
#interview
#jena friedman
#original
Do you know the scoop? Comment below or Send us a Tip